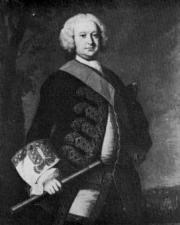 Royalist. James De Lancey was one of many Huguenot descendants whose families fled to New York after Louis XIV’s revocation of the Edict of Nantes. Many Huguenots settled in New York and South Carolina and had a considerable influence on the direction of the American colonies. James De Lancey was no exception. Born in America, De Lancey studied law in England and returned to New York in 1725. In 1729 he became a member of the royal council. In 1731 he took the position of associate judge on the colony’s supreme court, and in 1733 he became the chief justice of the colony. Through the administrations of royal governors William Cosby (1732-1736) and George Clarke (1736-1743) De Lancey actively supported imperial prerogatives. His progression to justice and chief justice, all the while remaining on the council, spoke to his dedication to Crown objectives.

Zenger. His participation in the John Peter Zenger trial attests to his royal allegiance. In 1733 Zenger, the young printer of an opposition paper, the New York Weekly Journal, went on trial for libel due to his constant barrage against Governor Cosby. De Lancey, chief justice at the time, proceeded to disbar any lawyers he believed might represent Zenger’s defense. Anti-Cosby leaders outmaneuvered De Lancey and bypassed his decision to a jury which decided that the chief justice did not have the authority to determine Zenger’s fate. Zenger was acquitted and released. The Zenger case became a powerful precedent for later free-press issues. In 1736 Zenger published a work by his supporter Andrew Hamilton (who was most responsible for Zenger’s acquittal) titled Brief Narrative of the Case and Tryal of John Peter Zenger. This work, excepting Cato’s Letters, had the most far-reaching effect on royal-opposition thought in eighteenth-century America. Given De Lancey’s role in this episode, one would not imagine that he too would become an instrument for royal opposition.

Political Transition. De Lancey’s imperial loyalties did not change until well into Gov. George Clinton’s ten-year administration (1743-1753). He began his opposition to Clinton primarily over their differing views of New York’s role in King George’s War. De Lancey strongly opposed Clinton’s policy of heavy involvement in the war. This difference mushroomed into consistent opposition to most of Clinton’s other policies. De Lancey’s larger importance in American colonial history emerges at this point because he represents a transitional element common to many colonial leaders at this time. This particular time was crucial in the political life of New York. Governor Clinton sought throughout his tenure to gain control of the assembly. De Lancey was one of the reasons he did not succeed in this effort. In 1753 Clinton left his position as New York’s royal governor. He delivered a commission that he had kept secret for six years that De Lancey was to be the lieutenant governor. Not long hence, Clinton’s replacement, Sir Danvers Osborne, committed suicide (he hanged himself in despair over his wife’s recent death), and the job fell to De Lancey to carry out Osborne’s instructions.

Acting Governor. The instructions left for De Lancey to carry out were detrimental to large landholders, many of whom were in the assembly and council. More important, the instructions directed the acting governor to seize appropriations control away from the assembly. De Lancey was to reinstate the “royal Prerogative and Authority,” which the assembly had “trampled upon, and invaded in a most unwarrantable and illegal Manner.” This was a particularly delicate position for De Lancey since he, during Clinton’s tenure, had been a key proponent of the assembly’s power of the purse. De Lancey was able to keep the authority of appropriations in the hands of the representative body. He always informed the assembly of imperial demands, but he never attempted to force their hand, walking a fine line between his duty as royal representative and that of provincial politician. In his periodic communications with the Board of Trade he would “always put the best possible face on the Assembly’s actions, stressing its fundamental loyalty to the Crown....” It is important to remember that neither De Lancey nor the assembly acted on purely representative or opposition ideals. This was never the case in any colony. In the early-eighteenth century New York Assembly, “Assemblymen sought to improve the position of the legislature for its own sake and for their own advantage, rather than in purposeful opposition to competitors within the colonial constitution.”

Significance. Whatever the motive, De Lancey stands as an important transitional figure in New York politics. Through his efforts as lieutenant governor (he remained at that post until his death in 1760) he acted as a royal representative but one with keen provincial, if personal, interests, interests that would nevertheless operate toward political stability in the face of ever-weakening royal control. Much to De Lancey’s credit the New York Assembly never lost its dominant role throughout the rest of the colonial era.

Family Responsibility. Like William Byrd II, James De Lancey was the English-educated son of a prominent colonist. His father, James De Lancey, was arguably the most important political figure in mid-eighteenth century New York. Son James was educated at Eton and Cambridge, after which he joined the British army. Also like William Byrd II, he was called home upon the death of his father to take responsibility for the family estates. In 1760 De Lancey moved back to America and brought with him a profound love of sports.

“Sportsman.” De Lancey came as close as one could to being a sportsman in the years before the American Revolution. Shortly after his return he brought the first thoroughbreds to New York and established one of the finest stud farms and stables in the colonies. His horses raced not only in New York but also Philadelphia, Annapolis, and Virginia. De Lancey owned not only fine horses but fighting cocks as well. On 6 March 1770 “the most famous main of the period” pitted the cocks of James De Lancey against those of Timothy Matlack of Philadelphia, at Richardson’s Tavern on the Germantown Road outside of Philadelphia. De Lancey’s role in sports ended with the American Revolution. He and his family were Loyalists. Unable to take up arms against the Crown, De Lancey sold his horses, farms, and stables and left America when war seemed imminent. He died in England.

Newcastle , NEW CASTLE NEW CASTLE, a colonial settlement in Delaware founded by the Dutch in 1651 as Fort Casimir, was established to compete with the Swedish-co… Lewis Morris , Lewis Morris Lewis Morris (1671-1746) was an American colonial official. Chief justice of New York, he later became royal governor of New Jersey. The… Mayflower Compact , MAYFLOWER COMPACT, signed aboard the May-flower on 11 November 1620 by the ship's forty-one free adult men, served as the basis for Plymouth Colony's… Andrew Hamilton (lawyer) , ZENGER TRIAL. Although appointed governor of the New York and New Jersey colonies in 1731, Colonel William Cosby did not arrive until 1732. In the in… Instructions , INSTRUCTIONS, issued to every royal governor on his departure for the colonies, delineated the specific powers established in the governor's commissi… Lettre De Cachet , lettre de cachet LETTRE DE CACHET. The term "lettre de cachet" refers to arrest warrants that were signed by the king and delivered at the request of…