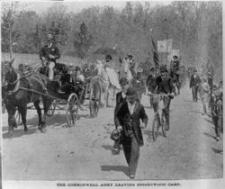 
Jacob Sechler Coxey (1854–1951) was a successful manufacturer and unusual reform leader. An advocate of pure paper currency and a champion for the unemployed, he was perhaps best known for organizing "Coxey's Army" of unemployed men to march on Washington, DC, in the first public protest of its kind.

Jacob Coxey was born on April 16, 1854 in Selinsgrove, Pennsylvania, the son of Thomas and Mary Sechler Coxey. His father worked as a sawmill engineer. When Jacob Coxey was six years old, the Coxey family moved to Danville, Pennsylvania, where the boy went to school. Coxey quit school at age fifteen to work in an iron mill as a stationary engineer. In 1878, at the age of 24, he started his own business as a scrap iron dealer. He moved to Massillon, Ohio, in 1881 and opened a sandstone quarrying factory. This business supported Coxey and his family, while the proceeds allowed him to pursue a second career in politics.

In 1877 Coxey joined the Greenback Party, which supported the idea of switching to a pure paper (green back) currency as opposed to one based on gold or silver. Coxey was a firm supporter of monetary reform, declaring that "the government should not only coin money but issue it and get it direct to the people without the intervention of banks." In 1885 Coxey ran unsuccessfully as a Greenback candidate for the Ohio State Senate.

Coxey's politics combined many of the ideas that were being pursued separately by the Greenbacks, Populists, and labor groups. Coxey believed that the combination of these ideas would restore the country to prosperity. He specifically supported a more plentiful currency, public works projects in cities, better transportation in rural areas, and jobs for the unemployed.

Following the financial panic of 1893 Coxey called for government investment in public works projects such as road-building. He particularly wanted Congress to adopt two bills. The first was the Good Roads Bill, which would require the government to issue $500 million of legal tender currency to improve county roads. The second was the Non-Interest-Bearing Bond Bill, which allowed any government body to obtain funds for public works through the issuance of bonds without interest. In addition, both bills required the government to employ any unemployed man who applied for a position, at a minimum wage of $1.50 per day, to work on these projects.

Coxey's ideals affected him personally when he was forced to lay off 40 laborers from his company. He then decided to become an advocate for the unemployed. Coxey joined forces with Carl Browne, a former radical politician and cartoonist from California. While Coxey was said to be soft-spoken and quiet, Browne was a flamboyant and eccentric character who dressed like Buffalo Bill. Together the two reformers organized a group of unemployed men to march across Ohio, Pennsylvania, and Maryland, to the capitol in Washington, DC, in an attempt to bring attention to their plight. "Coxey's Army" consisted of about 100 men when they left Ohio on Easter Sunday, March 25, 1894. When they arrived in Washington, DC, on May 1 that same year there were approximately 500 men. Coxey was not granted an audience with President Grover Cleveland (1885–1889, 1893–1897) but instead was arrested. Though Coxey did not succeed in his mission, he did introduce a new form of public protest—the march.

Despite this disappointment, Coxey continued to fight for his causes. In 1894 he ran unsuccessfully for Congress on the Populist ticket. Three years later he ran for governor of Ohio and was again defeated. In 1914 Coxey led another march on Washington, DC and this time he was allowed to speak to an audience from the Capitol steps. In 1922 he was given the opportunity to speak to President Warren Harding (1921–1923) and he argued for the abolition of the Federal Reserve System, which he believed to be a tool of the banking interests that he opposed.

Coxey continued to pursue political office in the early 1900s, running unsuccessfully for Congress, Senate, and President. He finally won a position as mayor of Massillon, Ohio in 1931, but lost his reelection bid in 1934. On the 50th anniversary of his first march on Washington, DC, May Day 1944, the 90-year-old Coxey was again given the opportunity to address a crowd from Capitol Hill. He died on May 18, 1951 in Massillon.

Sweeney, Michael S. "The Desire for the Sensational: Coxey's Army and the Argus-eyed Demons of Hell." Journalism History, 23, Autumn 1997.

The American reformer and eccentric Jacob Sechler Coxey (1854-1951) was a well-to-do businessman who, distressed by the economic depression of the 1890s and impelled by the era's reform ideas, led a march of unemployed workers to Washington, D.C., in 1894.

Born in Selinsgrove, Pa., on April 16, 1854, Jacob Coxey quit school at 15 and went to work in the rolling mills of Danville. Ten years later he was an operator of a stationary engine. He briefly ran a scrap iron business, then moved to Massillon, Ohio, and in 1881 purchased a sandstone quarry supplying steel and glass factories. Business prospered and Coxey expanded his interests into agricultural holdings. By 1894 he was the wealthiest man in Massillon, his reputed fortune $200,000.

Like many men of his time, Coxey was interested in reform, especially in currency questions. He had been a Greenback Democrat and a member of the Greenback party. He was an unsuccessful candidate for the Ohio Senate in 1885. By the 1890s he was a Populist. In 1894, when he burst into national prominence, Coxey was 40 years old, of medium height, had a neatly trimmed mustache, and presented the general appearance of a prosperous, conservative citizen of the middle class. He was no outstanding orator but impressed people with his simple earnestness and sincerity.

This was the age of the "tramp problem"—tens of thousands of unemployed men on the road in search of work. Along with a colorful colleague, Carl Browne, Coxey conceived the idea of a march on Washington by a "Commonweal of Christ" to dramatize the plight of the country's unemployed. The object was to pressure Congress to adopt Coxey's two pet schemes, designed to relieve the distress of the unemployed while waging war on the interest-based wealth he despised. His Good Roads Bill called for the issuance of $500,000,000 to be expended on the construction of rural roads for wages of $1.50 for an 8-hour day. His Bond Bill authorized the Federal government to purchase bonds from local governments with fiat money, which the latter would use to employ men in constructing various public works, again paying Coxey's minimum wage.

The marchers left Massillon in late March 1894, traveled on foot about 15 miles a day through bad weather, and arrived in Washington on May 1. Coxey had predicted he would arrive with 100,000 men, but his band never numbered more than 300 on the road and his following in Washington was about 1000. (Other "armies" patterned after Coxey's sometimes numbered 2000.) The expedition ended in fiasco with Coxey and Browne arrested and sentenced to 20 days in jail for walking on the grass.

Coxey stuck to his ideas. He testified in Washington several times (including as late as 1946) and ran for innumerable offices for almost every political party. He was Republican mayor of Massillon (1931-1934). In 1932 he received 7,000 votes as the presidential nominee of his Farmer-Labor party. In 1944 he delivered the speech on the Capitol steps in Washington that he had begun exactly 50 years earlier. He died in Massillon on Jan. 14, 1951.

Coxey was an eccentric, but much of the substance of his 1894 proposals was subsequently adopted in government measures. The ideas which he propagandized were in the air during the 1890s. Coxey's contribution was to synthesize and promote them in a coherent program.

The lack of a recent comprehensive study of Coxey must be attributed to the excellence of the standard work on the subject: Donald L. McMurry, Coxey's Army: A Study of the Industrial Army Movement of 1894 (1929; rev. ed. 1968). The revised edition contains an excellent introduction by John D. Hicks that traces Coxey's career after the publication of McMurry's book. See also John D. Hicks, The Populist Revolt (1931). □

Valley Forge , Valley Forge, Pennsylvania, located on the west bank of the Schuylkill River about twenty miles northwest of Philadelphia, served as the Continental… Manasseh Cutler , Manasseh Cutler American clergyman, scientist, and politician Manasseh Cutler (1742-1823) was a member of the Ohio Company of Associates and coauthor… Bill Clinton , Clinton, Bill Clinton, Bill 1946- Bill Clinton was the forty-second president of the United States, serving from 1993 to 2001. He was born William Je… Cumberland Road , CUMBERLAND ROAD, also known as the National Road, was the first national road in the United States. It had tremendous influence of the development of… John Mercer Langston , African american advocate Opportunities and Constraints. John Mercer Langston spent his life challenging racial boundaries and contributing to their… George Hunt Pendleton , PENDLETON, GEORGE HUNT George Hunt Pendleton was a prominent nineteenth-century lawyer, congressman, senator, and ambassador who played the central r…