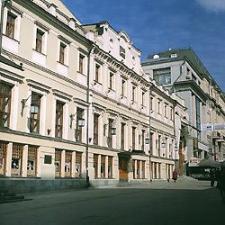 Vladimir Ivanovich Nemirovich-Danchenko was born in Ozurgety (now Makharadze), Georgia, on December 11, 1858. During the mid-1800s Georgia was annexed to Russia; falling to communist control during the Russian Revolution, in 1922 it would join the Union of Soviet Socialist Republics. From an early age Nemirovich-Danchenko exhibited a love of the theater. By age 13 he was acting and directing amateur theatricals and already trying out different stage techniques and effects. However, at age 18 he set aside his theatrical interests and went to Moscow, where he studied physics and mathematics at the Moscow State University from 1876 to 1879. Theater remained his first love, however, and during this time Nemirovich-Danchenko continued his involvement in the stage as a critic. After leaving school, he put increased effort into his work as a theater critic. Ultimately, while his criticism was much admired, Nemirovich-Danchenko's creative urges sought release in play-writing and fiction, balancing the analytical side of his personality.

In 1891 Nemirovich-Danchenko used his success with the play The New Undertaking as a springboard for furthering his career in the theater. On the recommendation of acting instructor Aleksandr Yuzhin, he was offered the post of instructor in dramatic art at the Moscow Philharmonic Society. The post was considered a humble one; the Philharmonic's school was considered second compared to the Moscow Imperial school, and there was little prestige in teaching lower-level courses. However, on the strength of Yuzhin's recommendation, as well as Nemirovich-Danchenko's theater criticism and his play, it was viewed as a coup that a non-actor was hired to teach acting. However, as he later wrote in his autobiography My Life in the Russian Theatre, translated by John Cournos, Nemirovich-Danchenko admitted not only that the school had a "bad reputation, but also that "there was among the pupils a terrible lot of riffraff.… The majority came here to be taught in the speediest manner possible how to act, so that they might be given good roles in a graduation play. The educative aim of the school was wholly ignored." It was dealing with these manner of students that Yuzhin had to intercede on Nemirovich-Danchenko's behalf, as the students objected to being taught by someone who did not act. To his students Nemirovich-Danchenko stressed the need for longer, better-organized rehearsal and a more flexible acting style. At first the playwright regretted his decision to teach acting, but as he began to weed out the nonserious students and as his principles took hold, the graduation performances at the Moscow Philharmonic Society drama school soon rivaled those of the Imperial School.

During the years he taught at the Philharmonic School Nemirovich-Danchenko published, in addition to plays, a book on acting translated as Drama behind the Scenes (1896), as well as two works of fiction: 1896's The Governor's Inspection and 1898's Dreams. Dreams would be Nemirovich-Danchenko's last work of fiction, as by the time it was published his career had already begun to take a new, historic turn.

Recognizing the dreadful state of Russian theater at the turn of the 20th century, Nemirovich-Danchenko arranged to meet with independent-minded stage director Konstantin Sergeyevich Stanislavsky. In 1897 the legendary meeting took place in the restaurant of the Slavyansky Bazaar hotel. The two men discussed the state of Russian theater, their disappointment in contemporary drama, and their hopes for a new style. They soon began to sketch out a plan, and in doing so the two like-minded men—in his autobiography Nemirovich-Danchenko declared that he and Stanislavky did not once disagree during their meeting—brought forth the seminal ideas for the Moscow Art Theatre. The two men remained at the restaurant long enough to have lunch and dinner there, then left for Stanislavsky's home to continue their discussion. In all, the meeting lasted an incredible 17 hours, but in that time the blueprint for the Moscow Art Theatre was drawn up.

The first production of the Moscow Art Theatre occurred on October 14, 1898. The play was the 1868 historical drama Tsar Fyodor, by Aleksey Konstantinovich Tolstoy. Tsar Fyodor went through some 70 rehearsals before the staging, and while the critics gave it good reviews Stanislavsky was disappointed in the performance, declaring that the actors were imitating his directions rather than truly acting. The fledgling theater struggled through three more productions before gaining a firm foothold in the Moscow theater world: They Who Take the Law into Their Own Hands, The Merchant of Venice, and Antigone. But all during this time Nemirovich-Danchenko was determined to right a wrong, and for the theater's fifth production he engaged Chekhov's The Seagull, which had not only lost out on the Griboyedov prize to Nemirovich-Danchenko's own play but had also received bad notices from the critics. It was with their production of The Seagull that the Moscow Art Theatre achieved its first real success. The play starred Vsevolod Meyerhold, who would himself become an influential director, and Olga Knipper, who would eventually become Chekhov's wife. Nemirovich-Danchenko had always encouraged Chekhov's theatrical aspirations, and he was the perfect playwright for the theater's philosophy. Thus began a long collaboration between Chekhov and the Moscow Art Theater that would see acclaimed productions of Uncle Vanya, The Three Sisters, and The Cherry Orchard. In 1904 Nemirovich-Danchenko also staged an independent production of Chekhov's Ivanov.

Besides Chekhov's plays, Nemirovich-Danchenko also chose to present a production of William Shakespeare's Julius Caesar, which was hailed as a masterpiece of psychological theater. He also produced Lonely Lives in 1899, a play by Gerhart Hauptmann, whom Chekhov admired, as well as work by Maurice Maeterlinck. Another playwright whom Nemirovich-Danchenko championed was Henrik Ibsen. In the 1890s, while he was the drama instructor at the Moscow Philharmonic School, Nemirovich-Danchenko had been the first director to successfully stage Ibsen's work in Russia when he produced A Doll's House. Now, at the influential Moscow Art Theatre, he produced Ibsen's plays in succession: When We Dead Awaken in 1900, Pillars of Society in 1903, Brand in 1906, Rosmersholm in 1908, and Hedda Gabler.

During the early years of the 20th century Nemirovich-Danchenko also began nurturing the young playwright Maxim Gorky. Gorky had already written a number of short stories and novels when he turned to writing for the stage. His first produced play was Smug Citizens, which was eventually banned and for which Nemirovich-Danchenko had to intercede to perform even occasionally. Meanwhile Nemirovich-Danchenko and Stanislavsky urged Gorky to write a play about the downtrodden. What resulted was The Lower Depths, a play whose power still held more than a century after its 1902 production at the Moscow Art Theatre. The Moscow Art Theatre also produced Gorky's Children of the Sun.

By the 1910s theatrical realism began to seem old-fashioned, although among the many plays Nemirovich-Danchenko produced during this period were Aleksandr Ostrovsky's Even a Wise Man Stumbles (1910), Saltykov-Shchedrin's The Death of Pazukhin (1914), and two adaptations of Dostoevsky's novels: The Brothers Karamazov and Nikolai Stavrogin, the latter based on the novel The Possessed. Symbolist writers such as Bely, Blok, and Bryusov had already made deep inroads in the Russian aesthetic, and futurists such as Mayakovsy and Meyerhold also came forth to challenge the tenets of realism. In time Nemirovich-Danchenko came to seem conservative, particularly in his choice of plays for production, although he was considered no less influential.

Following the October 1917 Russian Revolution both Vladimir Lenin, leader of the Russian Soviet army, and Anatoly Lunacharsky, the new Soviet commissar of culture, gave their crucial support to the Moscow Art Theatre. This in turn allowed the theatre troupe to travel abroad and give performances in Europe and the United States. This tour lasted from 1922 to 1924, during which time the Moscow Art Theatre gained widespread international acclaim. Nemirovich-Danchenko and Stanislavsky were now as well known abroad as they were in Mother Russia.

In the late 1920s and 1930s Nemirovich-Danchenko worked within the confines of Soviet-promoted socialist realism. His productions included the works of Soviet playwrights, notably Leonid Leonov's The Orchards of Polovchansk, adaptations of Tolstoy's novels Resurrection and Anna Karenina, as well as Russian classics such as Ostrovsky's The Storm (1935) and Griboyedov's Woe from Wit (1938). Particularly praised during his later career were the Moscow Art Theatre's stagings of Gorky's Enemies (1935) and Chekhov's Three Sisters (1940). Nemirovich-Danchenko worked with the Moscow Art Theatre right up until its evacuation during World War II. His autobiography was translated into English in 1936 as My Life in the Russian Theater.

In addition to the Griboyedov prizes Nemirovich-Danchenko was awarded the State Prize of the USSR in 1942 and 1943, the Order of Lenin, and the Order of the Banner of Red Labor. He died in Moscow on April 25, 1943.