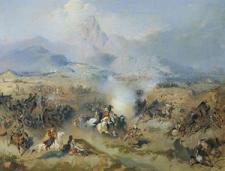 (1817–1875), writer of drama, fiction, and poetry; considered to be the most important nineteenth-century Russian historical dramatist.

A member of the Russian nobility, Alexei Tolstoy was expected to serve at court and in the diplomatic service, which prevented him from writing full time until relatively late in his life (1861). Nevertheless, he managed to produce a novel (Prince Serebryanny, 1862) and a dramatic trilogy (The Death of Ivan the Terrible, 1866; Tsar Fyodor Ivanovich, 1868; Tsar Boris, 1870), both based on the time of Ivan the Terrible. Although, by the time Prince Serebryanny was published, the fad for historical novels had long passed, it nevertheless enjoyed some popularity. Due to censorship restrictions, only the first of the three plays was performed during the author's lifetime, but all three were produced numerous times during the Soviet period. For all these works, Tolstoy relied on Karamzin's History of the Russian State, from which he lifted passages verbatim for his own work.

Tolstoy's lyric poetry, most notably "Against the Current" (1867) and "John Damascene" (1858), were strongly influenced by German romanticism. He also wrote satirical verse. Collaborating with the Zhemchuzhnikov brothers, he created the fictional writer Kozma Prutkov, a petty bureaucrat who parodied the poetry of the day and wrote banal aphorisms. Karamzin's History also served as the inspiration for Tolstoy's History of the Russian State from Gostomysl to Timashev, a parody of Russian history from its founding until 1868, which contained vicious characteristics of the Russian monarch. The manuscript circulated privately between 1868, when it was completed, and 1883, when it first appeared in print.

Vladimir Nabokov , Nabokov, Vladimir DIED: 1977, Montreaux, Switzerland NATIONALITY: Russian-American GENRE: Fiction, poetry MAJOR WORKS: King, Queen, Knave (1928) Spea… Metropolitan Filaret , FILARET OF MOSCOW FILARET OF MOSCOW (1782–1867) was a metropolitan of Moscow and Russian Orthodox church leader. Filaret was born into the clerical "… Vasily Osipovich Klyuchevsky , KLYUCHEVSKY, VASILY OSIPOVICH (1841–1911), celebrated Russian historian. Vasily Klyuchevsky was born to the family of a priest of Penza province. In… Demetrius , Demetrius, in the New Testament. 1 Silversmith of Ephesus who stirred up a riot against Paul. 2 Disciple commended in Third John. Demetrius, in Russi… Yevgeny Zamyatin , Zamyatin, Yevgeny Russian writer Yevgeny Zamyatin (1884–1937) was the creator of the novel We (1920), a science fiction satire on totalitarianism tha… Alaska , Alaska Alaska is the largest state in the United States, equal to one-fifth of the country's continental land mass. Situated in the extreme northwest…