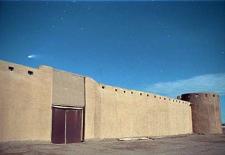 Trade in the Southwest . The trade between Anglos and Native Americans proved crucial to westward expansion in the nineteenth century. Few people were as central to that trade on the southern Great Plains as William Bent. Born into a large family on 23 May 1809 in St. Louis, Bent joined his older brother Charles in a Missouri River trading expedition in 1827. William and Charles then took a caravan of American goods along the Santa Fe Trail in 1829. Though proving profitable, William temporarily left the Santa Fe trade and began trapping. In the winter of 1829–1830 he saved the lives of two Cheyenne, thus inaugurating his long bond with these Indians. After an unsuccessful trapping excursion into Arizona, Bent resumed his commercial ventures by joining the company established by Charles and his partner, Ceran St. Vrain.

Ties to the Cheyennes . In 1831 the Bent brothers and some southern Cheyenne Indians agreed that the Bents would establish a trading post in eastern Colorado. After a competitor moved in, the Bents relocated their fort twice before establishing themselves in southeastern Colorado at Ft. William, or Bent’s Fort. In the late 1830s and early 1840s the site became a thriving center of trade between Anglos, southern Plains Indians, and Hispanics from New Mexico. Bent exchanged American manufactured goods for bison hides, horses, and mules. He married a Cheyenne named Owl Woman, which strengthened his relationship with that nation. Their offspring included two famous sons, Charles and George, both of whom later came to live and fight with the Cheyenne in their struggle to maintain their independence. When Owl Woman died around 1847, Bent married her sister Yellow Woman. These marriages not only assisted his commercial venture but also drew Bent closer to the Cheyenne, with whom he occasionally lived.

Peacekeeper . The Mexican War, and the struggles between the natives and the army that followed, helped bring an end to trade at Bent’s Fort. For unknown reasons the fort burned in 1849. Bent continued to participate in a number of profitable enterprises. During these years Bent strove to maintain peace between the Cheyenne, other native groups, and the American government. Although he did not always succeed at this largely hopeless task, he remained a powerful presence in the region until his death in 1869. William Bent was not only crucial in the expansion of the American market onto the Great Plains, but he also represents a transitional figure between the bison-based economy of the Cheyenne Indians and the eventual domination of the area by American settlers.