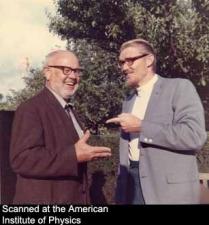 (b. 9 August 1911 in Pittsburgh, Pennsylvania; d. 14 March 1995 in Pasadena, California), physicist and educator who was foremost in creating the field known as nuclear astrophysics and whose studies of nuclear reactions in stars won a Nobel Prize in 1983.

Fowler was the eldest of three children of John Macleod Fowler, an accountant, and Jennie Summers Watson, a homemaker. Fowler was raised in Lima, Ohio, from the age of two when his father’s accounting firm transferred there. His teachers at Lima Central High School encouraged his early interest in engineering and science. An excellent student in academic subjects, Fowler was also active in high school athletics and as a senior won a letter in football. He had an enjoyable youth, observing later in life that near his home was a “running creek and swimming hole. What a wonderful environment it all was for my boyhood!”

While in high school, Fowler won a prize for an essay on the production of cement. Upon graduation in 1929 he selected ceramic engineering as a course of study when he matriculated that fall at Ohio State University in Columbus. As a sophomore he switched his academic focus to engineering physics. During the summer he worked as a recreation director at his boyhood elementary school in Lima, while during the academic year he waited on tables, washed dishes, and fired furnaces at a university sorority. On weekends, he cut and sold ham and cheese in an outdoor stall in a Columbus market.

He spent after-school hours in the electrical engineering department electronics laboratory, where he prepared an undergraduate thesis titled “Focussing of Electron Beams.” Graduating with a bachelor of engineering physics degree in 1933, Fowler enrolled as a graduate student at the California Institute of Technology (Caltech). There Fowler came under the supervision of Charles C. Lauritsen, the principal physicist in Caltech’s W. K. Kellogg Radiation Laboratory. Fowler viewed Lauritsen as the most important person in his scientific career. Under Lauritsen’s direction he wrote his Ph.D. dissertation, “Radioactive Elements of Low Atomic Number,” which demonstrated that nuclear forces are symmetric; that is, the interaction forces between two positively charged protons or two neutrons (nuclear particles without charges) are identical once classical electric forces are excluded. Fowler was awarded his doctoral degree in nuclear physics in 1936 with the highest possible academic distinction, summa cum laude.

Fowler was then appointed a research fellow in nuclear physics at Caltech, where he continued his scientific career of nearly fifty years. In 1939 he was appointed an assistant professor of physics and in 1942 was promoted to associate professor. In August 1940 Fowler married Ardiane Foy Olmsted; they had two daughters. That same year, and continuing for most of World War II, Fowler and most of the Kellogg Laboratory staff were engaged in weapons research for the government that included work on proximity fuses for bombs and ordnance rockets for the U.S. Navy. In 1944 he went to the South Pacific in a civilian scientific capacity for three months. During the last two years of the war, Fowler and other Caltech scientists were involved in producing components for the atomic bomb Manhattan project.

After the war, stimulated in large part by the work of the German American physicist Hans Bethe (who won the Nobel Prize in 1967), Fowler and his colleagues turned the primary activities of the Kellogg Laboratory to the study of nuclear reactions that take place in stars. In 1938 Bethe had proposed a detailed mechanism by which energy could be generated inside stars, involving reactions of the nuclei of carbon, nitrogen, and oxygen. These reactions were closely related to the ones being studied in the laboratory by Fowler. Pursuing these investigations at Kellogg and recognizing their important implications, Fowler and Lauritsen designated the focus of their general investigations as “nuclear astrophysics,” recognized thereafter as a discipline of its own.

Another of Fowler’s collaborators was the English astrophysicist and cosmologist Fred Hoyle, whom Fowler described as the second great influence in his life after Lauritsen. Hoyle in the early 1950s had conjectured that in order for carbon to exist in the universe (and therefore enable the existence of human beings on earth) it must be manufactured in stars. This could only happen if three helium nuclei (each with two protons and two neutrons) fuse together to form the isotope carbon-12 in an excited energy state level above the neutral ground state. Despite theoretical reasons for believing this nuclear reaction could not occur, Hoyle persuaded Fowler to investigate the question experimentally. Fowler then established the validity of Hoyle’s hypothesis.

The success of this important experiment led to the conclusion that all elements known in nature, from carbon to uranium, could be produced by nuclear processes in stars, starting with the hydrogen and helium produced at the birth of the universe in the famous “big bang” twelve to fifteen billion years ago. (The term “big bang” was first used by Hoyle in 1950. However, Hoyle rejected this “big bang” concept in favor of a steady-state theory in which the universe had an eternal life.) The theory was presented in Reviews of Modern Physics as the landmark article “Synthesis of the Elements in Stars,” written by Fowler and Hoyle together with Geoffrey Burbridge and Margaret Bur-bridge.

Hundreds of related experiments performed by Fowler or his graduate students confirmed nucleosynthesis in stars quantitatively. His research gave impetus to later developments in cosmology by himself and others illuminating difficult questions such as the emanation of radio waves from distant galaxies by gravitational collapse, the occurrence of supernovae, and the origin of the unusual massive stellar objects discovered in 1963 known as quasars. In 1965 he collaborated with Fred Hoyle on the book Nucleosynthesis in Massive Stars and Supernovae, and in 1967 his book Nuclear Astrophysics was published.

In 1983 Fowler received the Nobel Prize in physics “for his theoretical and experimental studies of the nuclear reactions of importance in the formation of the chemical elements in the universe,” which, the Nobel committee said, over the decades since the 1950s had been confirmed in its correctness by more recent progress in nuclear physics. He shared the prize with Subrahmanyan Chandrasekhar of the University of Chicago.

In addition to the Nobel Prize, Fowler won numerous other honors during his career. He was elected to the National Academy of Sciences in 1956. He received the United States Medal for Merit (1948), the National Medal of Science (1974), the Eddington Medal of the Royal Astronomical Society (1978), the Bruce Medal of the Astronomical Society of the Pacific (1979), and the Legion d’Honneur of France (1989). He was named Institute Professor of Physics at Caltech in 1970, a title he held until 1982 when he retired as professor emeritus. Columbia University conferred its 1973 Vetlesen Prize on Fowler, and in 1976 he was elected president of the American Physical Society. He received honorary degrees from the University of Chicago (1976), Ohio State University (1978), the University of Liége in Belgium (1981), Arizona State University (1985), George-town University (1986), and Williams College (1988), among others.

Fowler’s first wife died in May 1988 and in December 1989 he married Mary Dutcher, who had been an elementary school teacher on Long Island, New York. Fowler died of kidney failure in a Pasadena hospital at the age of eighty-three. He was cremated and his remains are in a private location in Vermont, where he loved to visit his daughter and only grandchild.

Besides bringing extraordinary personal scientific ability and energy to his work, what emerges clearly from Fowler’s distinguished research career was his ability to bring out the best in people. Unlike Nobel Prize—winning scientists Albert Einstein and Paul Dirac, whose exceptional discoveries were uniquely individual and did not depend materially on the efforts of others, Fowler’s accomplishments were frequently the result of collaboration, sometimes with his leadership and at other times with the initiative of others.

Fowler’s papers are in the archives of the California Institute of Technology. An autobiographical essay by Fowler appears in Tore Frängsmyr, ed., Nobel Lectures in Physics, 1981–1990 (1993). Dennis Overbye, Lonely Hearts of the Cosmos: The Scientific Quest for the Secret of the Universe (1991), and a personal reflection by Donald D. Clayton, “William A. Fowler: 1911–1995,” Publications of the Astronomical Society of the Pacific 108 (Jan. 1996): 1-7, discuss Fowler from the view of those who knew and worked with him. Fowler’s Nobel acceptance speech appears in Gösta Ekspong, ed., Nobel Lectures, Physics 1981–1990 (1993). John F. Gribbin, Q is for Quantum: An Encyclopedia of Particle Physics (1998), also discusses Fowler and his work. Hans A. Bethe, “The 1983 Nobel Prize in Physics,” Science (25 Nov. 1983), and “Nobel Prize to Chandrasekhar and Fowler for Astrophysics,” Physics Today (Jan. 1984), address the two Nobel Prize winners and their pioneering work in astrophysics. An obituary is in the New York Times (16 Mar. 1995).

The Scribner Encyclopedia of American Lives

oxford
views updated
Fowler, William Alfred (1911–95) US physicist and astrophysicist best known for his explanation of how chemical elements are built up (from heavier to lighter) within stars as they evolve. He developed these ideas (published 1957) while working with three British astronomers: Fred Hoyle, and Geoffrey and Margaret Burbidge. In 1983, he shared the Nobel Prize in physics with Subrahmanyan Chandrasekhar.