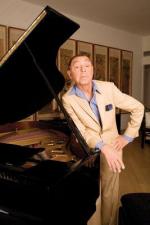 Stegemeyer, Anne, Who's Who in Fashion, Third Edition, New York,1996.

Batterberry, Ariane and Michael, "The Loner," in Connoisseur (NewYork), May 1985.

Morris, Bernadine, "By Galanos, the Simplest of Splendors," in the New York Times, 27 February 1990.

Dedication to excellence, in craftsmanship and design, was the foundation of James Galanos' career. The quality of workmanship found in his clothing is unsurpassed in America today. It may seem a contradiction that his sophisticated, mature, and elegant clothing was designed and produced in southern California, traditionally the land of sportswear. But Galanos was satisfied to remain where he began his business in 1951, a continent away from New York and the center of the American fashion industry.

Galanos knew what he wanted to do early in life and pursued his dream to design school, an internship in Paris, and several design positions with companies in New York. When the opportunity arose for him to open his own company, he created a small collection, which was immediately ordered by Saks Fifth Avenue. From this first collection his clothing has been admired for its particularly high quality, especially considering it was ready-to-wear, not custom-made. His chiffon dresses in particular made his reputation in the early 1950s, with their yards of meticulously hand-rolled edges.

Galanos gathered some of the most talented craftspersons available in his workrooms; many were trained in Europe or in the costume studios of Hollywood. If his work is compared to that of anyone else, it is compared to French haute couture. His business was more comparable to a couture house than a ready-to-wear manufacturer; there was an astonishing amount of hand work in each garment and all of his famous beadwork and embroidery is done by his staff. Galanos always chose fabrics and trimmings personally during trips to Europe. He lined dresses with silks that other designers used for dresses themselves; and was always a firm believer in the importance of hidden details, such as exquisite silk linings. These details made a difference in the feel of the clothes on the body and the hang of the fabric, and his clients all over the world were happy to pay for them.

Many of the world's most socially prominent women were Galanos customers. In the 1980s, he made national headlines as one of First Lady Nancy Reagan's favorite designers. The fact that Mrs. Reagan wore a 14-year-old Galanos to her first state dinner at the White House attests to the timelessness and durability not only of his workmanship, but more importantly, of his design. This type of occurrence was commonplace among his faithful customers.

His silhouette remained narrow with a fluid ease and Galanos continued to refine his shapes until his retirement in the late 1990s. If his design stylings changed in 50 years of business, they became more simple and refined. Not one to be satisfied with past success, Galanos relished the challenge of creating the perfect black dress. But despite his fondness for black in design, he was also known for his brilliant and unusual combinations of darker shades. His masterful handling of chiffon and lace tended toward the softly tailored, staying away from excess fullness of any kind. Galanos was not necessarily synchronized with the rest of the fashion world; if the themes of his collections bore similarities to others from year to year, it was coincidental.

Galanos preferred to work somewhat in isolation, both geographically and ideologically. His goal was to make the most elegant clothing possible for a select group of the world's most sophisticated women. The number of women who he considers truly elegant became smaller than it was when his career began, but he certainly succeeded in his goal of providing the clothing they required. Even before his retirement, Galanos designs were collected by his customers like other objects of artistic value, and have been well represented in museum collections around the United States.

In the 21st century, James Galanos and his contributions to fashion continue to be revered. He was inducted into Seventh Avenue's Fashion Walk of Fame in New York City in July of 2001. The plaques, embedded in Seventh Avenue, like Hollywood's tribute to the stars, were awarded to Galanos, Donna Karan, Oscar de la Renta, and Pauline Trigére. Bonnie Cashin, Giorgio di Sant'Angelo, Anne Klein, and Charles James were also honored with Seventh Avenue plaques, posthumously.

Often hailed as one of the few American designers to rival the great French couturiers in craftsmanship and exquisite finish, James Galanos achieved his position as one of America's premier designers through his commitment to exquisite fabrics and perfect workmanship throughout his long career. An uncompromising individualist, he established Galanos Originals in Los Angeles rather than New York's Seventh Avenue and went on to create a successful ready-to-wear business, catering to a discerning clientele.

Galanos was born in 1924 in Philadelphia, the third child and only son of émigrés from Greece. He knew at a young age that he wanted to design dresses and was fortunate to have the support of his family throughout his early struggling career. After graduation from high school in 1942, Galanos enrolled at the Traphagen School of Fashion, one of the oldest schools of its kind in New York City. He lasted only two semesters, having grown bored with the curriculum despite coursework that included design, draping, and construction. Hoping to gain actual design experience, Galanos took a job at the firm of Hattie Carnegie. This turned out to be another disappointment, so he left and began selling his sketches to ready-to-wear firms on Seventh Avenue, with limited success.

Galanos's acquaintance with the entrepreneur Lawrence Lesavoy led to his relocation to Los Angeles in 1946. After his failed business venture with Lesavoy left him unemployed, he made sketches for Columbia Pictures' head designer Jean Louis. Lesavoy compensated Galanos a year later by offering to underwrite his study and travels in Europe. In 1947 Galanos went to Paris, where he secured a position as apprentice designer at the House of Robert Piguet. Galanos stayed for just one year, yet the lessons in French fabrics and couture construction he learned at Piguet had a lasting impact on his later career.

Galanos returned to New York in 1948 and accepted a design position with another Seventh Avenue dressmaking firm, Davidow, but the venture was unsuccessful, and Galanos headed back to California. With the encouragement and financial backing of his former employer Jean Louis, Galanos designed a line of dresses, which was purchased by the Beverly Hills buyer for Saks Fifth Avenue, and thus Galanos Originals was launched in 1951.

From the start Galanos garments were unique. Although they were ready-to-wear garments, Galanos Originals included many features more commonly associated with custom dressmaking—hand embroidery, beadwork, rolled hems, tucking, piping, and luxurious fabrics. Integrally involved with all aspects of production, Galanos continued to run his design business through the years. Even into the twenty-first century he traveled twice a year to Europe, where he selected fabrics. He also designed the collection, consulted with technical assistants, over-saw the workroom, and had a hand in marketing the lines.

Galanos designs range from meticulous day wear to exquisite evening dresses, but all feature fabrics of exceptional quality. His perfectly cut suits and day dresses, fashioned from expensive wools, silks, cottons, and linens, featuring such fine detailing as welted seams and tucking that produce a sculptural quality akin to the designs of Cristóbal Balenciaga, one of Galanos's favorite designers. His simple wool dresses appear to be carved out of the fabric through virtuoso pleating. Galanos also has distinguished himself with his copious and accomplished use of chiffon throughout his design career. Pleating, draping, and bouillonné gathering are some of the labor-intensive hand techniques he has employed with this fabric. At times using up to fifty yards of chiffon in a skirt, Galanos has been credited with contributing to the postwar revival of the chiffon industry in France.

Galanos's evening dresses have emphasized finesse and luxury rather than innovation. During his career he explored many different silhouettes, including full, bell-shaped skirts and dropped-waist "ballerina" dresses in the 1950s, miniskirts and caftans in the 1960s and 1970s, and off-the-shoulder sheaths in the 1980s and 1990s. His trademark silhouette, however, is a columnar sheath shape, featuring wide shoulders and a long, slim skirt. This simple, understated form offers the perfect foundation for another of Galanos's trademarks—exquisite embroidery. In the mid-twentieth century, Galanos began to collaborate with the Los Angeles firm of D. Getson Eastern Embroidery in the creation of intricate, hand-applied beadwork, sequins, and embroidery. This collaboration produced some of the most elaborate, labor-intensive ready-to-wear garments on the market.

Despite the modest size of his business, Galanos's adherence to quality and detail always ensured him a devoted fan base. Nancy Reagan, who became a client when her husband was governor of California, is perhaps his most famous customer. She wore Galanos gowns to four inaugural balls and countless receptions. Her selection of a fourteen-year-old Galanos gown for the presidential inauguration ball in 1981 highlighted the timelessness of his designs while bringing Galanos a new level of national attention formerly accorded only by the fashion congnoscenti.

From fashion critics Galanos has received almost every possible award. He won his first Coty American Fashion Critics Award in 1954, followed by awards from Neiman Marcus, Filene's, the Fashion Group, the Sunday Times, and the Council of Fashion Designers in America. Galanos designs are represented in the permanent collections of many major museums, and he has been the subject of retrospective exhibitions organized by such institutions as the Los Angeles County Museum of Art (in 1975), the Fashion Institute of Technology in New York (in 1976), the Smithsonian Institution, the Metropolitan Museum of Art, the Brooklyn Museum, the Philadelphia Museum of Art, Ohio State University, the Dallas Museum of Art, and the Western Reserve Historical Society in Cleveland, in collaboration with the Los Angeles County Museum of Art (in 1996).

Galanos is considered one of America's great designers. His independent vision, rigorous work ethic, and continued insistence on preserving the use of quality fabrics and thoughtful cut and construction in his garments made him a unique living link between the French couture tradition and American ready-to-wear.

Encyclopedia of Clothing and Fashion