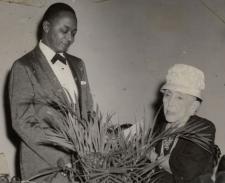 Born into a middle-class family in the South Carolina upcountry, James Henry Hammond fulfilled many of the expectations of his demanding, financially unsuccessful father. The eldest of eight children, Hammond in 1823 entered South Carolina College in Columbia, a training ground for the state's elite political leadership. He perfected his debating skills as a member of the college's Euphradian Society, serving as valedictory orator for his graduation in 1825. In addition to his scholarly achievements as a young man, Hammond may have had a very active sex life. In an 1826 letter to Hammond, classmate Thomas Jefferson Withers reminisced about feeling the "exquisite touches" of Hammond's "long fleshen pole," and he celebrated Hammond's "furious lunges" at bedfellows. In another 1826 letter, Withers portrayed Hammond "braying, like an ass, at every she-male you can discover" (Duberman, pp. 87–88). Though inconclusive as to whether Hammond had homosexual encounters with Withers or other men, the playful tone of the letters suggests that Withers, Hammond, and their larger social circle had carefree attitudes about male same-sex desire.

In 1828 Hammond opened a law practice in Columbia, and he soon became an articulate spokesman for South Carolina's states' rights, antifederal tariff nullification movement. From 1830 to 1831 he also edited the Southern Times , a nullification newspaper. The political establishment in South Carolina in the late 1820s and early 1830s favored a one-party system dominated by wealthy elites, limited suffrage, a hierarchical social order, and a plantation economy that distinguished it from the democratic, urban, industrial North. By his mid-twenties Hammond was known as an effective advocate for the political establishment, warning of the excesses of Jacksonian democracy. He joined the ranks of the South Carolina aristocracy with his marriage to Catherine Fitzsimons in 1831, acquiring an estate with nearly eleven thousand acres and 147 slaves.

At Silver Bluff, a small South Carolina community across the Savannah River from Augusta, Georgia, Hammond tried to dominate his newly acquired slaves by regulating their religion, marriages, child rearing, and work routines. He aimed to be the quintessential patriarch, controlling the lives of his wife, children, siblings, slaves, and overseers. His notoriety as a nullifier and defender of the status quo helped him win a U.S. congressional seat in 1834. Though he only served one term, he gained national fame by moving that the U.S. House of Representatives refuse any acknowledgment of petitions regarding slavery. Insisting that Congress lacked constitutional authority to act on slavery, Hammond solidified his reputation as a strict constructionist of the U.S. Constitution. He also served as South Carolina's governor from 1842 to 1844, using his tenure to promote his proslavery views.

According to Hammond, slavery served as the foundation for republican societies. He argued that black slaves in the South labored under more favorable conditions than did free laborers in Europe or the North. His belief in black inferiority did not prevent him from having sexual liaisons with two slave women: Sally Johnson and her daughter Louisa Johnson. He apparently fathered a child with both Sally and Louisa, adding two illegitimate children to the eight legitimate children he fathered with his wife, Catherine.

Though Hammond also served as a U.S. senator from 1857 to 1860, rumors of sexual improprieties with a teenage niece may have hampered his two previous attempts at winning a Senate seat. In the fall of 1843, the nineteen-year-old daughter of Hammond's brother-inlaw, Wade Hampton II, told her father that Hammond had attempted to seduce her the previous spring. Hampton used this information to blackmail Hammond, contributing to his Senate defeats in 1846 and 1850. Rumors about the Hampton affair dogged Hammond throughout the 1840s and early 1850s and led to the Hammonds' social ostracism among many elite South Carolinians.

However, Hammond revived his political career in the early 1850s. In the summer of 1850, he served as one of four South Carolina delegates at the first Nashville Convention, a pan-southern convention organized to discuss southern positions on Henry Clay's compromise bill on territorial questions. By the time of his 1857 election to replace A. P. Butler in the U.S. Senate, Hammond had gained a reputation as a cautious statesman. He continued to defend the South's slave system and to deny that the U.S. Congress had any power to regulate slavery, but he also believed that the South had a stronger position inside the Union than outside of it. Consequently, his moderation in the 1850s reduced his later influence in Confederate South Carolina. From the beginning of the American Civil War in April 1861 until his death in the fall of 1864, Hammond criticized Confederate policies that allowed officials to confiscate his food supplies and impress his slaves into labor. Hammond died at Redcliffe, the neoclassical mansion he built in 1858.

Encyclopedia of Lesbian, Gay, Bisexual and Transgendered History in America

James Henry Hammond (1807-1864) was governor of South Carolina and a U.S. senator. He was a radical proponent of the doctrine of states' rights.

James Henry Hammond was born on Nov. 17, 1807, in the Newberry district of South Carolina. After graduating from South Carolina College (now the University of South Carolina), he established a successful law practice in Columbia. In 1831 he married Catherine E. Fitzsimmons, an heiress, and moved to a large cotton plantation on the Savannah River.

In 1832 Senator John C. Calhoun of South Carolina, outraged by new tariffs, engineered a state convention that passed an ordinance nullifying the federal policies and preparing the state for armed resistance to federal attempts to enforce them. During this crisis Hammond took an extreme position, advocating secession from the Union if the tariff was not repealed. As a member of the House of Representatives from 1834 to 1836, Hammond bitterly attacked the abolitionists, whom he felt should be subject to the death penalty.

During his term as governor from 1842 to 1844, Hammond converted the Citadel at Charleston, S.C., into a military academy, advocated public education, and conducted a state agricultural survey. He again urged the legislature to secede rather than accept tariff increases. This proposal, originated by Robert Barnwell Rhett, was blocked by Calhoun, whose supporters persuaded the legislature to follow a more moderate course. In 1850 Hammond attended the Nashville Convention of Southern States as a secessionist.

Hammond's unwillingness to ally himself with either the Rhett or Calhoun factions prevented him from becoming a senator until 1857. During his term as senator, to the dismay of South Carolinians, he abandoned his secessionist views, for he had become convinced since 1850 that most Southerners had no desire to leave the Union as long as their rights were protected. He now urged Southerners to make concessions to Northern antislavery opinion, for he felt that Southern intransigence played into the hands of the abolitionists. His moderate views and his condemnation of proposals to reopen the slave trade lost him popularity at home. He did not favor secession after Abraham Lincoln's election for he saw no threat to Southern rights, but, yielding to pressure, he resigned from the Senate.

During the Civil War ill health kept Hammond from participating actively in Confederate politics, apart from one unsuccessful effort to persuade the Confederate government to make cotton the basis of credit. He died on Nov. 13, 1864, leaving an estate that included more than 300 slaves.