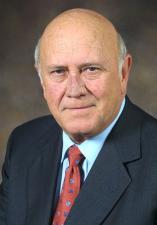 F. W. de Klerk was state president of South Africa from 1989 to 1994. He pointed his country in a new direction and was awarded the 1993 Nobel Peace Prize for his work to end apartheid (an official policy that virtually eliminated black African participation in government in South Africa).

Fredrik Willem de Klerk's actions as president went against a long tradition in Africa of using force to keep people down, and where control by foreign countries offered limited freedoms to the native peoples. In the early nineteenth century, England seized control from the Dutch of the Cape Colony at the southern tip of Africa. The Dutch-speaking inhabitants were removed from power and influenced by English-speaking settlers. British rule angered many Dutch in its more liberal treatment of African people. Between 1836 and 1838, several thousand Dutch Boers (farmers) left the Cape Colony to establish new societies in the interior of South Africa, beyond the reach of British authority.

This mass emigration, known as the Great Trek, created two sorts of enemies for the Dutch, who began calling themselves Afrikaners. The first enemy was the British, from whose power they were attempting to escape. The second was a number of powerful black African states, the Zulu being the best known, whose lands they were invading. During the next 150 years, the Afrikaners struggled against both. By the 1960s the Afrikaners seemed to have triumphed with the election of a purely Afrikaner National Party government in 1948. As a result South Africa withdrew from the British Commonwealth in 1960.

The National Party's policy of apartheid appeared to have ended the black African threat by the mid-1960s. But black protest revived in the 1970s and there were strikes by black workers, the uprising of school children in 1976, and intensified attacks by the African National Congress (ANC). Additionally there was a growing trend by people in other countries to isolate South Africa economically, which put intense pressure on the Nationalist government.

Largely because they had been denied any role in the new constitution, black Africans rose again in 1984. Demonstrations and riots were ruthlessly suppressed or ended. Killings increased, rising into the thousands by 1986. President Pieter W. Botha (1916–) eased some "petty apartheid" laws, but left the system's basic structure intact. He declared a state of emergency, which suspended what civil liberties were left and led to the detention, without trial, of perhaps thousands of black and white dissidents (those who publicly disagreed with the government's policies). South Africa's economy suffered enormously and the Rand, the basis of the currency, lost nearly two-thirds of its value. But Botha maintained his resistance to fundamental change. Into this situation stepped F. W. de Klerk.

De Klerk was born on March 18, 1936, in Johannesburg, South Africa. His uncle, Johannes G. Strijdom, a prime minister of South Africa in the1950s, had installed many apartheid laws. De Klerk attended Potschefstroom University, a center of Afrikaner nationalist thought. In 1972, while teaching law, he was elected to Parliament, South Africa's governing body, and represented the town of Vereeniging. All this activity was in the province of Transvaal, a focal point of Afrikaner political power and the location of most of the mineral wealth that is the basis of the South African economy.

He joined the cabinet (close political advisors) of Prime Minister Balthazar Johannes Vorster (1915–1983) in 1978. During the next two decades, de Klerk served many offices, including minister of post and telecommunications and minister of sports and recreation. De Klerk eventually became the chief of the Transvaal branch of the party.

In January of 1989 Botha suffered a stroke that forced him to resign as head of the National Party. Though Botha remained state president, de Klerk replaced him as party leader. An extraordinary episode occurred in August when de Klerk, without Botha's knowledge, announced a meeting to talk about the South African situation with Zambia's president Kenneth Kaunda. Botha publicly criticized de Klerk and then suddenly resigned the presidency. De Klerk became state president, which set the stage for the extraordinary events of February 11, 1990.

At the outset of his presidency, de Klerk seemed to associate himself less with the security and military branches of the government and more with the economic and foreign policy offices, which are more interested in South Africa's standing overseas. Then there was de Klerk's undoubted loyalty to the National Party. As South Africa faced hard times in the 1980s, so did the party. Even Botha believed that South Africa must "adapt or die." His halting steps toward reform split the party between those who wanted to strengthen and those who wanted to reform apartheid. Having inherited this division, de Klerk may have believed that the way to save the party was to attract reformers, many of them English-speaking, who had previously supported other groups.

Few were prepared for the dramatic news of February 11, 1990, when de Klerk announced the release of Nelson Mandela (1918–), the South African resistance leader, from prison after spending twenty-seven years there. This was a major step in ending apartheid in South Africa.

On May 7, 1990, de Klerk and a government delegation had their first formal meeting with Mandela and representatives of the ANC, whom the government had once considered terrorists. Both leaders reported the meeting to have been friendly, and each stated his regard for the integrity of the other. Both leaders were well aware that years of repression had produced many dangerous forces that could at any time damage the results of that meeting and its hope for South Africa's future. De Klerk's role as the catalyst in changing the course of South Africa's history seemed secure. Additional evidence came on September 24, 1990, when at a meeting with President George Bush (1924–) he became the first South African head of state to visit the White House.

De Klerk worked with Mandela to abolish apartheid and grant constitutional voting rights to all South Africans. In 1993 the two shared the Nobel Peace Prize. In April 1994 they saw their efforts pay off as they campaigned against each other in the first all-race election in South Africa. In this election, with black South Africans casting the majority vote, Mandela became the first black president of South Africa. De Klerk became the second vice president in Mandela's Government of National Unity.

In 1996 the government adopted a new constitution that guaranteed equal rights. De Klerk was concerned, however, that the constitution would not protect minority group rights. The National Party, still led by him, broke away from Mandela, saying that South Africa needed a strong multi-party system.

In August 1997 de Klerk resigned as head of the National Party and stepped out of politics. At the news conference, he stated, "I am resigning because I am convinced it is in the best interest of the party and the country."

In October 1998 the South Africa Truth and Reconciliation Commission announced that it would release a report about crimes that were committed during apartheid and that this report would not include any mention of questionable activities that de Klerk may have been involved in. The commission works to bring south Africans together by investigating and reporting on events that occurred during apartheid.

In December 2001, de Klerk joined more than thirty other Nobel Prize winners in Oslo, Norway to celebrate the prize's one-hundredth anniversary and to discuss peace in the twenty-first century.

oxford
views updated
de Klerk, F.W. ( Frederik Willem) (1936– ) South African statesman, president (1989–94). De Klerk entered parliament in 1972 and joined the cabinet in 1978. In 1989, de Klerk led a ‘palace coup’ against P. W. Botha, and became president and National Party leader. Following a narrow electoral victory, de Klerk began the process of dismantling apartheid. In 1990, the ban on the African National Congress (ANC) was lifted and Nelson Mandela was released. In 1991, the principal apartheid laws were repealed and victory in a 1992 whites-only referendum marked the end of white minority rule. In 1993, he shared the Nobel Peace Prize with Nelson Mandela. Following the 1994 elections, de Klerk became deputy president in Mandela's government of national unity. In 1996, he resigned and led the Nationalists out of the coalition. He retired as leader of the National Party in 1997.