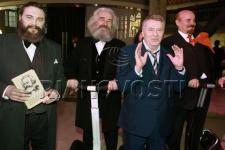 Zhirinovsky proved himself a master of the media available to Russian politicians in the December 1993 elections. A gifted demagogue, his message of extreme nationalism struck a chord among Russians suffering and fearing the hardships and uncertainties brought about by the collapse of the Soviet empire and the transformation from a planned economy to a market economy. He won support from those most vulnerable in the transformation, and from people who wanted to make an emphatic protest of the course Russia was following. His populist style and the simple solutions he proposed came in contrast to the professorial style and approaches of many of his reformist opponents. The unexpected success of Zhirinovsky's party, the Liberal Democratic Party of Russia, was regarded by many observers inside and outside Russia as a sign that reform was unraveling.

Zhirinovsky was given to extreme positions expressed vividly, vigorously, and often outrageously. For example, he once proposed that nuclear waste be buried along the borders of the Baltic countries to poison their inhabitants. He favored a strong, even authoritarian, president for Russia and advocated a return to Russia's "natural borders," which would mean the incorporation of parts of the former Soviet Union in the Russian Federation. In his autobiography, Last Thrust to the South, he argues for a division of the world by the great powers that would allow Russia to acquire Iran, Turkey, and Afghanistan. Russian soldiers, he wrote, would "wash their boots in the warm water of the Indian Ocean." Many of the ills that afflicted Russia, he believed, came from the southern regions of the former Soviet Union and the countries that extend southward to the Indian Ocean. Making them a part of Russia would make Russia peaceful, prosperous, and void of ethnic conflict.

Zhirinovsky was born in 1946 in Almaty, the capital of Kazakhstan. His father, who was Jewish, died in an automobile accident before Zhirinovsky was a year old. His mother was left alone to raise Zhirinovsky and his five older brothers and sisters. He attended a Russian school in Almaty, a mostly Russian city in a republic where Russians formed a minority. He grew up resenting both his poverty and the discrimination he saw favoring the Kazakhs, whom he believed were favored over Russians in everything from grades in school to political appointments.

He went to Moscow to study Turkish at the Institute of Oriental Languages and earned a diploma with distinction. He proved to have a talent for languages and learned English, French, and German as well as Turkish. While in his final year at the university, Zhirinovsky spent eight months in Turkey as an interpreter for a delegation of engineers. But he left after the police arrested him for distributing badges with Soviet symbols. This was his second trip abroad, his first outside the Soviet bloc.

Following graduation Zhirinovsky served for two years in the army as a political officer in Tbilisi, Georgia. He then returned to Moscow to work in the International Relations Section of the Soviet Committee for the Defense of Peace. In 1975 he began to work with foreign students at the Higher School of the Trade Union Movement in the office of the dean. Both jobs gave him the opportunity to work extensively with foreigners who came to Moscow.

After he earned a law degree by taking evening courses at the Law Faculty of Moscow State University, he worked at the Foreign Law Collegium under the Moscow City Bar and then as a legal consultant at the Mir Publishing House. He also served as a legal adviser to Shalom, a Jewish cultural organization sponsored by the Soviet Government.

His political career began in 1987 with membership in the informal group Fakel. In December 1989 he joined the Democratic Union, a radical group given to staging demonstrations and challenging the authorities. He and others left to found the Liberal Democratic Party in March 1990. The following April the Liberal Democratic Party became the first political party to be officially registered after the constitution of the U.S.S.R. was amended to end the monopoly enjoyed by the Communist Party.

He ran for president of Russia in June 1991 and received 6.2 million votes, almost 8 percent of the total, which made him third in the race, behind Boris Yeltsin and Nikolai Ryzhkov, the chairman of Gorbachev's Council of Ministers. This was a surprising result for someone previously unknown.

He immediately declared his intention to run again and kept himself in the public eye through his sometimes incendiary remarks. In 1993 he participated in drafting the new constitution that was approved through a referendum held at the same time as the new legislature was elected.

In the December 1993 elections to the new legislature, the Federal Assembly, the Liberal Democratic Party won almost a quarter of the vote for the half of the lower house elected according to party lists, but did less well in the other half of the State Duma, which was elected by district. The party thus gained 63 of the 450 seats in the State Duma, enough to become a significant force allied to the Communist Party of Russia and other conservative forces. Zhirinovsky sought to become the speaker of the Duma, but was denied the post. Despite his strong showing in 1993, Zhirinovsky's often boorish behavior alienated him from many of his supporters. After the LDPR lost 13 seats in the 1995 parliamentary elections Zhirinovsky himself placed only fifth in a field of ten contenders in the preliminary elections for president in 1996. Questioning the fairness of the existing election processes, Zhirinovsky, refused, to vote for any candidate that year indicating they were unsuitable for the task. He then vowed to run again, and win, future elections.

Zhirinovsky's autobiography, (The Final March South) has not yet been published in English however, David Remnick's Lenin's Tomb (1993) provides a vivid description of the Soviet Union as it collapsed. John Dunlop's The Rise of Russia and the Fall of the Soviet Empire (1993) is a well-researched account of the Soviet collapse that deals specifically with the rise of nationalist movements. Vladimir Kartsen's !Zhirinovsky! An insider's account of Yeltsin's chief rival (1995) provides a first hand look at the man himself. Authoritative and accessible analyses of recent events in Russia and Russian foreign policy can be found in the research reports of Radio Free Europe/ Radio Liberty (RFE/RL). Among the many press reports see "Comrade Zhirinovsky's Shadowy Past" in Parade Magazine (January 30, 1994), Lee Hockstader's "How Russia's Zhirinovsky Rose" in The Washington Post (March 6, 1994), Michael Specter's "Zhirinovsky and the Motherland" in New York Times Magazine (June 19, 1994), Arshad Mohammed, "Zhirinovsky calls polls unfair vows return," Reuters (July 7, 1997) and George Zarycky's, "A primer on Russian elections," Freedom Review (May 1, 1996). □

(b. 1946), founder and leader of the Liberal-Democratic Party of Russia, deputy speaker of the State Duma.

Born in Alma-Ata in Kazakhstan, Vladimir Volfovich Zhirinovsky was the son of a Jewish lawyer from Lviv and a Russian woman. After his father's death he was raised by his mother. He graduated from Moscow State University in 1969, then served in the army in Tiflis, where he worked in military intelligence. From 1973 to 1991 Zhirinovsky worked at various jobs in Moscow and at night attended law school at Moscow State University. In the 1980s he directed legal services for Mir publishing.

With the coming of perestroika Zhirinovsky began his political career. In 1988 he founded the Liberal Democratic Party of Russia (LDPR), the second legal party registered in the Soviet Union. In 1991 he ran for the presidency of Russia and received 6 million votes. Emphasizing populism and great-power chauvinism and denouncing corruption, he built up a loyal party organization. In the December 1993 parliamentary elections, Zhirinovsky

parlayed discontent with Boris Yeltsin into a plurality in the State Duma. In the complex election system for individual candidates and party slates, the LDPR received 23 percent of the total vote, fifty-nine of the party seats in the Duma, and five individual seats.

In the December 1995 Duma elections, the LDPR vote fell sharply to 11.1 percent, and the party won only fifty-five seats in the parliament, well behind the resurgent Communist Party. In 1996 Zhirinovsky ran for president again, but this time he finished fifth (5.7 percent) in the first round of voting and was eliminated.

In the Duma elections of 1999 the LDPR drew6.4 percent of the vote and got nineteen seats. Zhirinovsky was elected deputy speaker of the Duma. In the 2000 presidential election he ran again and drew only 2.7 percent of the vote, or a little more than 2 million out of the 75 million who voted. Zhirinovsky supported both the first and the second Chechen War. An acute student of mass media, he remained in the national spotlight by combining outlandish behavior, populist appeal, and authoritarian nationalism. His antics included fist fights on the floor of the Duma and throwing orange juice on Boris Nemtsov during a television debate. He made headlines by threatening to take Alaska back from the United States and to flood the Baltic republics with radioactive waste. Zhirinovsky has called for a Russian dash to the south that would end "when Russian soldiers can wash their boots in the warm waters of the Indian Ocean."

Liberal Democratic Party , The Liberal Democratic Party of Russia (LDPR; known as the LDPSU during the last months of the Soviet period) was created in the spring of 1990, with… Yevgeny Maksimovich Primakov , (b. 1929), orientalist, intelligence chief, foreign minister, and prime minister under Boris Yeltsin. Born in Kiev, Yevgeny Maximovich Primakov grew… Joseph Stalin , Joseph Stalin Soviet revolutionary and political leader Joseph Stalin took control of the Soviet Union after the death of Vladimir Lenin (1870–1924),… Yuri Luzhkov , Yuri Luzhkov Yuri Luzhkov Russian politician Yuri Luzhkov (born 1936) has proven to be a popular mayor of Moscow. He has ushered in reforms to the ec… Chechnya , THE TSARIST AND SOVIET LEGACIES THE END OF THE SOVIET ERA INDEPENDENT CHECHNYA THE FIRST WAR THE SECOND WAR BIBLIOGRAPHY Chechnya is a small, mountai… Russian Federation , Type of Government The government of Russia operates under a super-presidential system that grants broad powers to the elected head of state, the pre…