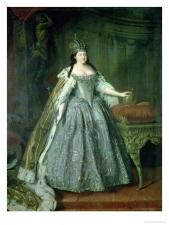 Anna Ivanovna was a daughter of Peter the Great's half-brother and co-ruler Ivan V. When Peter's young grandson, Peter II, died unexpectedly the Romanov male line came to an end. The Supreme Privy Council faced the problem of deciding to which of the five female pretenders the Russian crown was to be passed.

Two powerful aristocratic families, the Golitsyns and Dolgorukys, dominated the Council. They hoped to limit the powers of the autocratic monarch, a plan that required a docile and passive figure on the throne. Anna seemed to fit their needs perfectly. She was a widow in near impoverishment, wishing to escape her difficult circumstances in Courland (Latvia). The Council believed that given her essentially weak character and probable gratitude toward the Council for the offer of the crown, she would prove malleable enough to accept restrictions on her power. In a signed document Anna agreed not to make any decisions on war or peace, taxes, promotions, deprivation of titles and property, remarrying, appointment of an heir, or spending of state revenues without approval of the Supreme Privy Council. The Council had in effect executed a coup d'etat. Real power had moved from the autocrat to the oligarchy in the Council.

As word began to spread about these conditions, lesser nobles began to form opposition against the Golitsyn and Dolgoruky conditions. These lesser nobles, dependent on the monarch for their positions, privileges, and material well-being, preferred the absolute power of a monarch, believed to be above petty personal interests, to what they considered to be the despotism of a small clique of aristocratic families.

Anna entered Moscow on February 15, 1730. Taking advantage of the opposition among the nobles and Imperial Guards to the limiting of her power, at an audience she tore up the document she had signed after accepting petitions asking her to reclaim her autocratic power. Some historians regard this as a lost opportunity for Russia to break from its autocratic past. They believe that the granting of legal rights to the nobility as a whole would have led to dramatic changes in the sociopolitical structure, thereby removing many obstacles created by the autocratic system to Russia's further economic and political development.

In return for their support against the Council, these nobles pressed Anna for concessions and privileges that she eventually granted. She repealed the 1714 Law on Primogeniture, shortened military service, allowed entrance for nobles into the military at officer rank and gave them more control over their serfs. These moves represented the beginning of an upgrading of the Russian nobility's status.

Anna had little inclination for ruling, preferring gossip, trivia, and matchmaking. Her lover from Courland, Count Ernst-Johann Biron, exercised a decisive influence on her. The great resentment Russians felt towards him and the other foreigners Anna placed in key posts and to whom she granted much patronage became a leitmotiv of her reign. This resentment, which continued after her reign, had other roots as well. As Russian identity among the upper classes began to solidify, the influx of foreigners, whose expertise was regarded as important for modernization, came to be seen as an affront to Russian dignity. The damaged belief in Russian superiority, combined with the frequently bad behaviour of foreigners, added to the complexity of this problem.

Anna took several steps to consolidate her rule. She founded the powerful Izmailovsky Guards, whose head was a former lover. The intelligence service was reestablished, providing an effective mechanism for surveillance and control over society. Finally, in order to bypass the Supreme Privy Council, in 1731 Anna established a Cabinet of Ministers, which in reality governed the Empire. This was not a limitation on the autocratic power, since Anna willingly granted these powers to the Cabinet of Ministers and was able to take them back at will.

Anna's foreign policy reinforced the general line set by Peter and thereby set the tone for Russian foreign policy for the rest of the century. With Austria she fought the War of Polish Succession (1733–1735) to prevent the resurgence of French influence in Poland and to promote the election of a pro-Russian king, thereby adding to the security of the Empire's western borders. Continuing Russia's push southward to the Black Sea, Anna with Austrian support declared war on the Ottoman Empire. The war ended in 1739 with the defeat of the Crimean khanate, Russia's regaining of Azov, and the understanding that St. Petersburg would deal decisively with rivals on Russia's Black Sea coast. Anna failed, however, to gain the right to maintain a Russian fleet in the Black Sea, a recurring issue in Imperial Russian history. The policy of working with Austria in regard to Poland and the Ottoman Empire was adopted by Catherine II.

Lincoln, W. Bruce. (1981). The Romanovs: Autocrats of all the Russias. London: Weidenfeld and Nicolson.

Born in Moscow on Jan. 29, 1693, Anna was the daughter of Ivan V, co-czar of Russia with his half-brother Peter I. After her father's death in 1696, she and her mother and sisters became dependent on Czar Peter I.

In 1710, acquiescing to Peter's wish, Anna married Frederick William, Duke of Courland. Although her husband died shortly after the wedding, the Czar ordered her, as the duke's widow, to take up residence in Mitau, the capital of Courland, counting on her to strengthen Russian influence in the duchy. That arrangement was quickly disrupted by a hostile political faction in Courland, which forced Anna out of Mitau; she was obliged to make her home in Danzig. In 1717 she was permitted to return to Mitau, where she remained as de facto ruler of Courland for 13 years. During that period she received slight attention from her homeland and no special consideration when, after the death of her uncle Peter I, the Russian throne was occupied first by his wife, as Catherine I, then by his grandson, as Peter II.

Anna's Courland experiences had important consequences for her later career: her regard for the German-speaking ruling class made her appear more partial to Germans than she actually was; her years of existence on a paltry allowance deepened her desire for luxuries; the pervasive political intrigues she encountered reinforced her distrustful nature; and lonely life led her to form an attachment for her secretary, ambitious Johann Ernst Biron, upon whom she became excessively dependent.

When Peter II, the last Romanov male in line of succession, died without having made provision for a successor, the Supreme Privy Council, a small body exercising dominant power in the Russian government, saw Anna as the Romanov most likely to be amenable to their suggestions. Accordingly, they informed her that the throne would be hers if she agreed to certain conditions that would, in effect, transfer power from the ruler to the Council. She agreed to the conditions and returned to Russia in February 1730. Once established as empress, however, she promptly disavowed the conditions.

During her reign Anna was held in generally low esteem. She persisted in her infatuation for Biron, whom she installed in her palace, showered with honors, and treated with unbecoming deference. Some of her official appointments led to the charge that she favored Germans over Russians. Moreover, even by the cruel standards of the time, she was immoderately severe in her treatment of any who aroused her disfavor; she was responsible for the arrest, torture, or exile to Siberia of thousands.

Despite her shortcomings, Anna did not work against Russian interests as they were then interpreted. Rather, she entrusted major responsibilities to men who had served Peter I and would continue his policies.

As a result, in foreign affairs Russia was strengthened in three strategic areas: the War of the Polish Succession (1733-1735) brought the pro-Russian Augustus III of Saxony to the throne of Poland; the war with Turkey (1735-1739) confirmed Russian possession of Azov; and the selection of Biron as Duke of Courland in 1737 increased that duchy's dependence on Russia and thus improved Russia's position on the Baltic.

In domestic affairs, also, Anna followed in the steps of Peter I, continuing his policy of westernization. She declared St. Petersburg the capital and brought back the offices of government that Peter II had moved to Moscow. She created the Cadet Corps for training officers. She encouraged the sciences, promoted the arts in general, and approved the development of the ballet in Russia.

Having no direct heir, Anna was determined to ensure that her successor would come from her side of the Romanov family—that is, from the descendants of Ivan V rather than those of Peter I. To that end, she chose her niece Anna Leopoldovna to provide the heir and selected her husband. A son was born to them in August 1740 and christened Ivan. Two months later the Empress became gravely ill and, fearing the approach of death, formally named the infant as her heir. Shortly thereafter she appointed Biron to serve as regent during the minority of the child, who would succeed her as Ivan VI. The empress Anna died on Oct. 17, 1740.

Black Sea , The Black Sea, into which flow the Danube, Dnieper, Dniester, and Don Rivers, is connected to the Aegean Sea and eventually the Mediterranean Sea by… Vasily Osipovich Klyuchevsky , KLYUCHEVSKY, VASILY OSIPOVICH (1841–1911), celebrated Russian historian. Vasily Klyuchevsky was born to the family of a priest of Penza province. In… Nicholas Ii (russia) , Nicholas II (1868-1918), the czar of Russia from 1894 to 1917, was a staunch defender of autocracy. A weak monarch, he was forced to abdicate, thus e… Russian Language , Russian language, also called Great Russian, member of the East Slavic group of the Slavic subfamily of the Indo-European family of languages (see Sl… Count Sergei Yulyevich Witte , Count Sergei Yulyevich Witte The Russian statesman Count Sergei Yulyevich Witte (1849-1915) is noted for his policy of Russian industrialization, for… Treaty Of Nystadt , Nystadt, Treaty of The Treaty of Nystadt was signed on August 30 (September 10, O.S.), 1721, in the Finnish town of Nystadt. It ended the twenty-one…