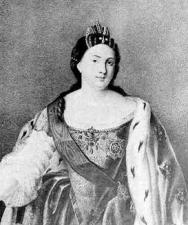 Martha Skavronskaya's background, nationality, and original religious affiliation are still subject to debate. She encountered the Russian army in Livonia in the summer of 1702, when she was working as a servant, and apparently became the mistress first of a field marshal, then of Peter I's favorite, Alexander Menshikov, then of Peter himself. By 1704 she was an established fixture in the royal entourage. There were unconfirmed rumors of a secret marriage in 1707, but only in 1711, prior to his departure for war against Turkey, did Peter make Catherine his consort. Their public wedding took place in February 1712 in St. Petersburg. The marriage was deplored by traditionalists, because Peter's first wife was still alive and Catherine was a foreigner. It is unclear precisely when she converted to Orthodoxy and took the name Catherine.

Catherine established her own patronage networks at court, where she was closely allied with Menshikov, arranging the marriages of elite women, interceding with Peter on behalf of petitioners, and dispensing charity. Peter provided her with a western-style court and in 1714 introduced the Order of St. Catherine for distinguished women and made her the first recipient, in recognition of her courage at the Battle of Pruth in 1711. In May 1724, in a lavish ceremony in the Moscow Kremlin, he crowned her as his consort. In November, however, relations were soured by the arrest and execution of Catherine's chamberlain Willem Mons on charges of corruption, who was also reputed to be her lover. Despite issuing a new Law on Succession (1722), Peter died in 1725 without naming a successor. It suited many leading men to assume that Catherine would have been his choice. Her supporters argued that not only would she rule in Peter's spirit, but she had actually been "created" by him. She was the all-loving Mother, caring for orphaned Russia. Such rhetoric won the support of the guards.

Catherine's was a remarkable success story. Not only did she manage, with Peter's help, to invent a new identity as empress-consort, but her short reign also illustrates how the autocracy could continue to operate successfully under an undistinguished female ruler. Her gender proved to be an advantage, for the last thing the men close to the throne wanted was another Peter. The new six-man Supreme Privy Council under Menshikov dismantled some of Peter's unsuccessful experiments in provincial government, downsized the army and navy, and reduced the poll tax. In 1726 an alliance with Austria formed the cornerstone of Russian diplomacy for decades to come. Peter's plans for an Academy of Sciences were implemented, and western culture remained central for the elite.

Catherine bore Peter probably ten children in all, but only two survived into adulthood, Anna (1708–1729) and Elizabeth (1709–1762). Catherine would have preferred to nominate one of them as her successor, but Menshikov persuaded her to name Peter's grandson, who succeeded her as Peter II in May 1727.

Alexander, John. (2000). "Catherine I, Her Court and Courtiers." In Peter the Great and the West: New Perspectives, ed. Lindsey Hughes. Basingstoke, UK: Palgrave.