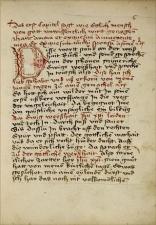 Heinrich Suso, the Rhineland mystic, was born at Constance and early entered the Dominican order. A mystical experience at the age of eighteen set him on the path of asceticism, but a later one, between 1335 and 1340, led him to abandon self-mortification and to embark on an active career as preacher and spiritual adviser. As a result of attacks on some of his teachings and on his personal character, he was transferred to Ulm in 1348.

During his period of studies in Cologne, Suso had come into contact with Johannes Tauler and also came under the influence of Meister Eckhart. Indeed, in Das Büchlein der Wahrheit (The Little Book of Truth, c. 1327) he was bold enough to defend Eckhart against the doctrinal charges leveled against him, setting Eckhart's disputed doctrines alongside other quite orthodox statements made by him and providing interpretations that did not entail pantheistic conclusions.

Although Suso made use of the Eckhartian-sounding distinction between the undifferentiated Godhead and God as manifested in the persons of the Trinity, he did not hold that there was an ontological distinction within the divine Being. Rather, he held that the distinction was an intellectual one, made from the human point of view and dependent on our mode of trying to understand God's nature. Although Suso also used extreme Neoplatonic language in speaking of God as Nothing, he made it clear that this was simply to say that, because of God's complete simplicity, we cannot ascribe predicates to him in the sense in which they are applied to creatures. Suso went on to try to explain the contrasting and paradoxical multiplicity of God's nature, as exhibited in the Trinity, by the usual concept of eternal procession. Like his doctrine that the distinction between the Godhead and God as the Trinity is not an ontological one, the notion of procession should be taken in a way that does not imply the priority of God considered as a simple Nothing over God considered as the Father, Son, and Holy Spirit. Thus, Suso drew a strong distinction between the procession occurring within the divine Being and the creation of the world. The latter is a free act of God, and creatures owe their being to him; thus God is ontologically prior to the world. On the other hand, the internal dynamics of the Trinity are a perfect and eternal feature of God's life.

The idea of God as Nothing reflected, as did similar doctrines held by other medieval mystics, not only a view about predication in theology but also about the mystical experience itself. Thus, Suso characteristically spoke of that state in which the contemplative is taken out of himself and is made calm in the ground of the eternal Nothing. The fact that the contemplative experience is free from images and discursive thought is a sufficient explanation of the negative language used. Suso generally avoided the suggestion that the soul is merged with the Godhead and described the union as one of wills in which, however, the soul retains its identity. Nevertheless, there were times when he, orthodox as he generally was and wished to be, spoke of a substantial identification with the Godhead. Some explanation of this apparent inconsistency is found in his assertion that in the mystical state the individual is no longer aware of his own identity. It is afterward, and through going beyond a merely phenomenological description of the experience, that the mystic is able to give what he considers to be the correct theological account of it.

Suso's chief works were the autobiographical Das Buch von dem Diener (The Life of the Servant ); the Horologium Sapientiae, which also occurs in a somewhat different German version as Das Büchlein der ewigen Weisheit (The Little Book of the Eternal Wisdom ); and Das Büchlein der Wahrheit (The Little Book of Truth ). The second of these, which is a dialogue about and meditation on the sufferings of Christ, attained a wide circulation, almost rivaling that of Thomas à Kempis's The Imitation of Christ. Because of the degree of openness in the description of his inner life, Suso's writings constitute a valuable source for the study of Christian mysticism.

Monarchianism , A heresy that, through an exaggerated concept of the unity (monarchia : one origin, one rule) of God, denied the distinction of persons in the Divini… Karl Barth , Barth, Karl BARTH, KARL BARTH, KARL (1886–1968), Swiss Reformed theologian, described by Pope Pius XII as the greatest theologian since Thomas Aquina… Johannes Tauler , TAULER, JOHANNES Dominican preacher and mystic; b. Strasbourg, c. 1300; d. there, June 16, 1361. He entered the Dominican novitiate c. 1315 in his na… Trinity , Trinity TRINITY . Trinitarian doctrine touches on virtually every aspect of Christian faith, theology, and piety, including Christology and pneumatol… Eternity , The concept of eternity qualifies both discussion about God and about human destiny, although in different but analogous way. Most believers would pr… Atheism , An atheist is a man who lives without God. If he persists in this state, atheism truly becomes a way of life. It is not possible to formulate a singl…