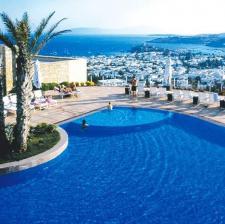 town in southwestern turkey on the anatolian shore of the aegean sea on a peninsula of the same name at the northern end of the gulf of kerme, opposite the greek island of kos.

It is said that Bodrum (Turkish for "underground vault" or "cellar") gets its name from the vaultlike ancient ruins that abound in the area. Originally it was called Halicarnassos by its first settlers, the Dorians from the Peloponnese (1000 b.c.e.). Bodrum was the birthplace of many famous Greek intellectuals, notably Herodotus (ca. 484–ca. 420 b.c.e.), who chronicled the struggle for control of the city's fortunes between Greece and Persia in his Histories. In 1402 the Knights of St. John came from Rhodes and built one of its most famous landmarks, the Castle of St. Peter. The peninsula was brought back into Ottoman rule in 1523 when Süleyman the Magnificent ousted the Knights of St. John from Rhodes, and consequently from Bodrum.

Bodrum is part of the present-day Turkish Riviera and is known for its historic sites, clement weather, colorful jazz bars, idyllic whitewashed houses, marina and yachting facilities, and its resident artist community. Celebrated novelist Cevatsakir Kabaağaçlu immortalized the lore and legends of the local seafarers in a collection of short stories.

The 2000 Turkish government census listed the urban population as 32,227 and 65,599 in outlying rural areas (97,826). A favorite vacation spot, the population varies greatly in the summer, with an annual number of visitors totaling 1.5 million between June and August.

Empress Of Rome Livia , 58 b.c.e . - 29 c.e. Unsettled Life. Livia was born into a patrician family with a long history of active political involvement. In 43 or 42 B.C.E.,… Finland , Emergence of the Nation. Human habitation in Finland dates to the early postglacial period in the late eighth millennium b.c.e., long before Finno-Ug… Mark Antony , Mark Antony Born: c. 83 b.c.e. Rome (now in Italy) Died: 30 b.c.e. Alexandria, Egypt Roman politician and general The Roman politician and general Ma… Bogazkoy , BOGAZKöY city in turkey on the site of the probable hittite capital in central anatolia. Known as Hattushash (or Pteria, in Greek), today's Bogazköy… Sargon Ii , 721–705 b.c.e. Assyrian king Sources Usurper. In 722 b.c.e. Sargon, whose Akkadian name (Sharrukin) means “the king is legitimate,” overthrew the Ass… Darius I , 521-486 b.c.e.. King of Persia Sources The Persians. The Persians were a cattle-herding group who moved from Central Asia into Iran at the end of the…