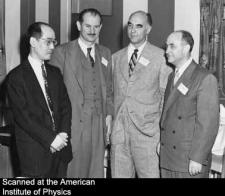 MCMILLAN, Edwin Mattison (b). 18 September 1908 in Redondo Beach, California; d. 7 September 1991 in El Cerrito, California), physicist who won the Nobel Prize in chemistry for his work on the transuranic elements and was codiscoverer of neptunium and plutonium.

McMillan was the only child of Edwin Harbaugh McMillan, a physician, and Anne Marie Mattison, a homemaker. When McMillan was a year and a half old, the family moved to suburban Pasadena, California. As a youth McMillan built many gadgets and took advantage of his proximity to the California Institute of Technology by attending public lectures. In 1924, after graduating from Pasadena High School, he attended the California Institute of Technology. His undergraduate work was first-rate, as demonstrated by his election to Sigma Xi, a scientific research honor society, and Tau Beta Pi, an engineering honor society. While still an undergraduate he published his first paper in chemistry on the X-ray study of alloys of lead and thallium. His faculty collaborator was Linus Pauling, the future double Nobel Prize laureate in chemistry and in peace, who suggested that McMillan publish the paper. McMillan received his bachelor of science degree in 1928. A year later he received his master of science degree, then he transferred to Princeton University to work on his doctoral degree in physics, which he obtained in 1932.

The work for his doctorate, carried out under E. U. Condon, famous for the Franck-Condon Principle, examined the generation of a molecular beam of hydrogen chloride nuclei in a nonhomogeneous electric field. This molecular beam method enables one to measure the magnetic moment of a proton, a particle of relative mass and charge of one and plus one respectively. While at Princeton University, McMillan published several papers on research he completed without a collaborator. One paper dealt with the isotopie composition of lithium in the Sun. In 1932 he won a richly deserved and highly regarded National Research Council (NRC) fellowship to support his research at any university or research institute in the country. That year McMillan accepted an invitation to work with Ernest Orlando Lawrence, who was then exploring the potential of the cyclotron, at the University of California at Berkeley. A cyclotron is a circular accelerator capable of generating particle energies of very high magnitude. The charged particles generated at a central source in a vacuum are accelerated incrementally in a plane at right angles to a fixed magnetic field by an alternating electric field of frequency equal to the frequency of revolution. The particles spiral outwardly with increasing energy.

While in the process of completing his apparatus for the measurement of the magnetic moment of the proton, McMillan discovered that Otto Stern had published his results on the experiment. So McMillan began to study the hyperfine structure and published several papers in that area. Simultaneously he grew increasingly interested in the activities of the adjacent Radiation Laboratory. Nuclear physics was changing rapidly with the discoveries of the neutron by James Chadwick in 1932, the positron by C. D. Anderson in 1932, and induced radioactivity. Immediately McMillan recognized the efficacy of the cyclotron.

In 1934 McMillan joined the staff of Lawrence’s Radiation Laboratory as a research associate. Beginning in 1935 he was simultaneously an instructor of physics at the University of California at Berkeley. Described as a fine teacher, he rose to assistant professor in 1935, to associate professor in 1941, and to full professor in 1946. The last two promotions were in absentia. From the beginning of their association, Lawrence recognized McMillan’s inventiveness and his profound practical and analytical skills. McMillan was a meticulous and versatile experimenter. Discoveries seemed to spring from his work. He made the first substantial verification of the theory that a gamma ray striking a nucleus would yield an electron pair, one negative, one positive. In 1934 McMillan and M. Stanley Livingston discovered radioactive oxygen-15. In 1940, with Samuel Reuben, he discovered beryllium-10, and with Philip Abelson he succeeded in the separation of a product of 2.3-day activity (beta decay) from fissionable uranium-239. McMillan was rightly convinced that the product was produced by transmutation rather than fusion and was, therefore, a new element. He deduced that this was not an element of the manganese family, which was the consensus among chemists, but rather that the product was more like the rare earth elements. Using his chemical expertise, he completed the separation and proved conclusively that this was a transuranium element, the first, and named it neptunium. The daughter product of neptunium, for which the name plutonium was reserved, was expected to be an alphaactive isotope. Although McMillan and Abelson detected some alpha activity, it was too weak to measure. World War II interrupted his research, and all of his work on element 94 was left to Glenn J. Seaborg. A team headed by Seaborg completed the work on element 94, leading to a joint Nobel Prize in 1951. Element 94, plutonium, became the principle material for atomic bombs.

During World War II, McMillan directed the field tests of America’s first airborne radar at the Massachusetts Institute of Technology. He also researched sonar at the Navy Radio and Sound Laboratory in San Diego, California, and he was an assistant to J. Robert Oppenheimer at Los Alamos. McMillan worked on both the Hiroshima-type and the Nagasaki-type atomic bombs.

On 7 June 1941 McMillan married Elsie Walford Blumer, whose sister, Mary Kimberly, was married to Ernest Lawrence. They had three children.

After the war McMillan concentrated on accelerators. As particles were accelerated numerous times, they fell out of phase with the accelerating pulse and slowed down. In a flash of insight McMillan determined the conditions that would keep the particles accelerated. He called the device a synchrotron, an accelerator in which the charged particles are accelerated around a fixed circular path by a radio-frequency (rf) potential and held to that path by a timevarying magnetic field. Thus the particles had “phase stability.” This instrument became the standard of highenergy physics. Later McMillan learned that Vladimir I. Veksler, a Soviet scientist, had a similar idea and published papers on it. They shared in the recognition of their parallel work, which had happened frequently in science.

McMillan taught both undergraduate and graduate physics courses from 1946 to 1954 and supervised fifteen graduate students to Ph.D. degrees. He ceased teaching when he was appointed associate director of the Radiation Laboratory in 1954. He became deputy director after Lawrence’s death in August 1958. Subsequently he became director of the renamed Lawrence Radiation Laboratory and served for fifteen years, until his retirement in 1973. He retired from Berkeley in 1974, but he participated in the laboratory’s work until he suffered a stroke in 1984.

McMillan was an active participant on various scientific policy committees and program advisory committees to several laboratories. He served on the General Advisory Committee to the Atomic Energy Commission, was elected to the National Academy of Science in 1947, and was a fellow of the American Physics Society. He received the Research Corporation Scientific Award in 1951; the Nobel Prize in 1951; and the Atoms for Peace Award in 1963. In 1990 he received the nation’s highest civilian award, the National Medal of Science. Even though he received numerous other awards and honorary degrees, he maintained his humility.

McMillan died on 7 September 1991 at his home in El Cerrito, California, after years of declining health. He died of complications from diabetes just eleven days shy of his eighty-fourth birthday. He is buried in El Cerrito.

McMillan was one of the world’s great scientists. His interests were expansive, varying from the rocks and shells on the beach to elementary particles to mathematics to the composition of the Sun. His discoveries had a profound effect on various fields of study, from anthropology (carbon-14 dating) to the study of fundamental particles (synchrotron) to defense and unlimited energy (plutonium discovery). He was a great teacher, modest and witty. He enjoyed gardening, smoked a pipe, and drove a 1957 Thunderbird.

The Scribner Encyclopedia of American Lives

oxford
views updated
McMillan, Edwin Mattison (1907–91) US physicist. In 1951, he shared the Nobel Prize in chemistry with Glenn Seaborg for their discovery of neptunium and other transuranic elements. McMillan worked on the atomic bomb at Los Alamos, New Mexico, then on the cyclotron with Ernest Lawrence at the University of California at Berkeley. McMillan developed the synchrocyclotron that led to modern nuclear accelerations, for which he shared the 1973 Atoms for Peace Prize with the Russian physicist V. I. Veksler.