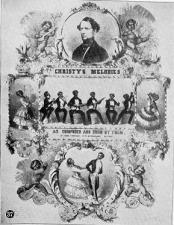 The American minstrel Edwin P. Christy (1815-1862) was not the originator of the minstrel show, but the Christy Minstrels set the pattern which almost all other companies followed.

Little is known about Edwin P. Christy's early life. He was born in Philadelphia in 1815 and worked for a time as an office boy in New York. He was subsequently a hotel clerk and a traveling salesman. It is known that about 1840 "Ned" Christy gave performances on the banjo and tambourine in the hotels and barrooms in Buffalo and a short time later blackened his face, dressed himself in old "plantation" clothes, and performed as a minstrel in Harry Meech's Museum in Buffalo. He was expert on the banjo, the instrument which was to provide the minstrel show its special musical character.

Christy's original company was formed in 1842. At first they called themselves the Virginia Minstrels, probably in imitation of an earlier group led by another famous minstrel, Dan Emmett, composer of Dixie. But when the original group of four was expanded to seven, the name was changed to the Christy Minstrels. It was the "Christy's" that became world famous.

History of the Minstrel Show

Christy never claimed to have created this theatrical form, as indeed no one could, for it was a kind of entertainment that gradually grew out of folk roots over the years. Christy merely credited his group with being "the first to harmonize and originate the present style of Negro minstrelsy."

The minstrel show's true source was the songs and dances of African American slaves in the antebellum South. From the touching melodies of joy and lament of these subject people grew an elaborate theatrical imitation which in time developed stereotypes far removed from their human origins. (The stage African American, characterized as a lazy, careless, fun-loving, rhythmic fellow, dressed in gaudy clothes, persisted as stereotype well into the 20th century.) Though the minstrel's portrait doubtless contributed to the white man's condescension toward African

Americans, the minstrel show itself was not malicious in intent, for its endeavor was always to provide simplehearted entertainment, and the performers early learned that their material was more appealing in blackface than in white. The show's presentation of human foibles and sentiments was directed toward its white audience, not its African American progenitors.

The most famous of those actors who early darkened their faces for the stage to render plantation songs was T. D. "Daddy" Rice, to whom most properly belongs the title "Father of American Minstrelsy." It was his presentation of the song and dance Jim Crow (at first merely between acts of a play) that initiated the vogue of the minstrels. In 1832 at the Bowery Theater in New York, he gave 20 encores and probably brought more into the box office than any other performer of his time.

Christy's contribution came in formalizing the structure of the minstrel show. He settled upon the semicircular seating arrangement of the large company with the interlocutor at the center and with two end men, one with a set of bones (or castanets) and the other with a tambourine. The role of the interlocutor—the only performer not blackfaced and the role which Christy usually assumed—was to introduce the various acts, to harmonize and pace the activity, and to be the pompous butt of the jokes of the witty "Tambo" and "Bones" at the ends.

Christy's minstrel show was set up in three parts. It began with the elaborate entrance of the entire group in brilliant costume, a regalia of brightly colored dress suits, striped trousers, high hats. With the interlocutor's famous command, "Gentlemen, be seated!" the second portion, known as the "First Part," began. It consisted of a variety of individual and choral songs, dances, and the chatter between the end men and the interlocutor. The "Olio," or last part, was an assortment of individual specialty acts, much as was found later in vaudeville, concluded by the entire company participating in the "breakdown," or "hoedown."

Christy also made elaborate use of the minstrel's parade, a bright musical march down the main street of American towns to announce the arrival of the company—a scene which was to become part of the nostalgic myth of 19th-century America.

Success of the Christy Minstrels

After their original performances in Buffalo in 1842, Christy's troop, growing in size and popularity, toured the West and South, arriving in New York in 1846 to give a brief series of concerts. But they were so successful that in 1847 they moved into Mechanics Hall, where they played for almost 10 years, giving over 2500 performances. The popularity of the "burnt-cork players" spawned many other companies, but until his retirement Christy was the king of his profession.

Christy's group toured England with such success that thereafter all such organizations came to be called "Christy's." There were the Royal Christy Minstrels, the Queen's Christy Minstrels, and even a group which performed in the costumes of the English court.

Christy himself introduced the melodies of Stephen Foster to the public long before their rich simplicity was to make them American favorites.

By 1854 Christy had decided to retire. His company, however, continued to prosper under the leadership of George Christy (whose real name was Harrington), who had been a member of the original troop in Buffalo. Though Edwin retired a wealthy man, he fell increasingly into moods of melancholy in which he imagined himself penniless. In 1862, during one of these periods of temporary insanity, this man, who had brought laughter and music to so many, jumped from a window in his New York home and killed himself.

No full-length biography of Christy exists, though sketches of his career are given in various histories of the American stage that deal with minstrel shows. The most scholarly treatment of minstrelsy is in Carl F. Wittke, Tambo and Bones: A History of the American Minstrel Stage (1930), which provides a valuable record of the major minstrels and their companies. Dailey Paskman and Sigmund Spaeth, Gentlemen, Be Seated! (1928), gives details about individual companies and provides examples of songs and jokes of the minstrels, along with numerous drawings and photographs. Isaac Goldberg, Tin Pan Alley (1930), relates minstrel music to the popular music of a later period. □