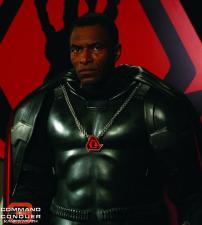 Judge Spencer Boyle, How Stella Got Her Groove Back, Twentieth Century–Fox, 1998.

Narrator, Marcus Garvey: Look for Me in the Whirlwind, 2001.

Charlie Walker, Back to the Streets of San Francisco, NBC, 1992.

Ron Dellums, The Color of Friendship, The Disney Channel, 2000.

Voice of Theseus, "The Gospel at Colonus," Great Performances, PBS, 1985.

Jimmy, "And the Doorknobs Shined Like Diamonds," The Jeffersons, CBS, 1981.

Voice of Colonel William Marcus, "Other Space," The Real Adventures of Jonny Quest (animated), The Carton Network and TBS, 1997.

Voice of Tumbulu, "Chimp off the Old Block," The Wild Thornberrys (animated), Nickelodeon, 1999.

"The Facts in the Case of M. Valdemar and Berenice," Sundays at the Itchy Foot, Center Theatre Group, Mark Taper Forum, 1986.

Appeared in The Island and Siswe Bansi Is Dead, Los Angeles Actors Theatre, both produced on tour of Californian cities.

Narrator, A Season on the Reservation: My Sojourn with the White Mountain Apache, by Kareem Abdul–Jabbar, Simon & Schuster, 2000.

In the role of Agent Dixon on the hit television program Alias in the early 2000s, Carl Lumbly conveyed a streak of edgy intensity lurking beneath the veneer of a traditional supporting actor's sidekick part. That intensity has run through much of Lumbly's acting work and has its roots in the dynamics of the actor's early life. Praised by critics, Lumbly built a successful acting career in spite of his reluctance to accept many of the roles that fell to African-American actors.

Lumbly was born to Jamaican immigrant parents in Minneapolis, Minnesota, on August 14, 1952. His family had recently come to chilly Minnesota after meeting a local radio host, Cedric Adams, while he was vacationing in Jamaica. Lumbly's father Carrol got a job as a welder but never felt at ease in the United States, and his mother mostly stayed at home. Lumbly's parents raised their children with an appreciation of the Jamaican culture. About his family's home Lumbly recalled to the Minneapolis Star Tribune that "Once you stepped in the door, you were in Jamaica."

Out of sight of his father, who brooked no disrespect, Lumbly would amuse his sister Amy (a future television news reporter) by imitating their father's finicky way of aligning his tableware. He showed an interest in theater while he was attending South High School in Minneapolis, but most of his free time was taken up by playing basketball and trombone—sometimes in the course of the same game. He would change clothes during the coach's halftime pep talk and come out onto the court with his trombone for the band's halftime show. "I like to work real hard," Lumbly told the Star Tribune.

Winning admission to Minnesota's competitive Macalester College, Lumbly majored in English and took roles in two student theater productions. Urged to pursue a professional career by his father, he thought about attending law or medical school, and he had no thoughts of trying to act professionally. After graduating, Lumbly accepted a public relations job at the 3M corporation and also did some freelance newspaper writing on the side. One evening in the mid-1970s, he visited an innovative new theater company called Brave New Workshop to observe its open auditions, hoping to write an article about them but not planning to audition himself.

Through a mixup that began when Lumbly stood in the wrong line of people, he ended up auditioning. Three weeks later, the Workshop directors asked Lumbly to join the company. He did and soon found himself enjoying acting quite a bit. He appeared in several revues, signed on with several other theater companies, and even wrote a comic play of his own, Badd High. The high points of his experiences were some episodes of improvisational theater he performed at Brave New Workshop. "I lived with many, many strictures in my life, and adhered to lots of things that other people believed I should adhere to," Lumbly told the Star Tribune. In an improv skit, on the other hand, he found that anything goes. "Whenever I could, I would try to see just how strange and how weird and how far away from myself I could be." But when he veered into questionable humor, he worried about how his father would react if he saw him.

Despite his stage appearances, Lumbly didn not yet consider himself an actor. Partly to get away from Minnesota's cold winters, he moved with a girlfriend to San Francisco in 1977 and decided to try to make a living as an Associated Press writer. But he saw a classified ad in a newspaper seeking two black actors for parts in a pair of short plays by South African writer Athol Fugard. After an audition with director Robert Woodruff, Lumbly was hired for one of the parts, and future superstar Danny Glover got the other. That break led to other stage parts. Especially active in live theater during the 1980s, Lumbly finally won his ill father's approval of his new career after appearing in a 1983 Minneapolis production of the musical The Gospel at Colonus. He also appeared at such prestigious venues as the New York Shakespeare Festival, where he played the role of Oberon in Shakespeare's A Midsummer Night's Dream in 1988.

Soon after moving to California, Lumbly began to attract television and movie parts as well, beginning with a bit part in the film Escape from Alcatraz in 1979. What made him a familiar face to the public at large was his ongoing role as Sgt. Marcus Petrie in the hit television series Cagney & Lacey, which he joined beginning with the pilot episode in 1982. He also appeared in several films with specifically African-American themes; in the 1991 Public Broadcasting System film Brother Future, he played slave rebel Denmark Vesey.

That was the first of several roles in which Lumbly played figures from the slavery era; he would later appear in a film devoted to Nat Turner, and his first television film starring role came in Nightjohn, which featured him as a slave who teaches others to read. Lumbly generally declined roles that he felt relegated African-American actors to stereotypical urban action tales, and he has been a consistent voice speaking out in favor of increased opportunities for black performers. When he did take an action role, it was an unusual one: he starred in the 1994 Fox network series M.A.N.T.I.S. as the disabled Dr. Miles Hawkins, who takes on the powers of a giant insect. Featuring television's first black superhero, the series gained a cult following but lasted only one season.

Lumbly won an NAACP Image Award nomination for his performance in the 1997 television film Buffalo Soldiers, and he kept his profile high with appearances in the hit film How Stella Got Her Groove Back and with guest slots on the television series The X-Files and The West Wing. In 2001 he was cast opposite actress Jennifer Garner in the ABC network's over-the-top spy series Alias; Lumbly and Garner played espionage partners enmeshed in a giant web of deception that led them to keep secrets from their loved ones and from each other. Alias creator J.J. Abrams cast Lumbly in the role of Agent Marcus Dixon because he felt Lumbly would bring a sense of gravity to stories that otherwise risked running into campy territory.

Married to actress Vonnetta McGee, Lumbly has one son, Brandon. He continues to enjoy writing in his spare time, and he stays in shape as a marathon runner. In 2003 he starred in a made-for-TV remake of the classic film Sounder, and he looked to a future in which he challenged himself with a wider range of roles in theatrical feature films. He didn't rule out playing the evil characters he had long avoided, but, he told the Star Tribune, he had always followed an overriding set of principles. "A lot of what has guided me in the past is the history of black men in this industry and the history of black men in this country. There's also the personal history with my father."

Judgment in Berlin (also known as Escape to Freedom ), 1988.

Conspiracy: The Trial of the Chicago Eight (television movie), 1987.

Back to the Streets of San Francisco (television movie), 1992.