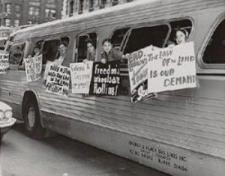 FREEDOM RIDERS were African American and white protesters, many associated with the Congress of Racial Equality. In 1961, the Freedom Riders traveled by bus through Alabama and Mississippi to challenge segregation at southern bus terminals. Freedom Riders who journeyed to Alabama and Mississippi often faced extraordinary violence from resentful white southerners. For example, infuriated whites assaulted bus riders in Birmingham, Anniston, and Montgomery, Alabama, and harassed riders in McComb, Mississippi. Although the Freedom Rides exacerbated racial tension and violence, they shed new light on the plight of African Americans and the brutal actions of white segregationists. They also forced the federal government to take protective action. U.S. government officials sent more than 400 federal marshals to Montgomery to protect the Freedom Riders, whose actions ultimately influenced monumental and long-lasting changes in federal law. Within the next two years, a series of federal rulings and lawsuits ended systematic segregation in interstate travel. Attorney General Robert F. Kennedy petitioned the Interstate Commerce Commission to outlaw segregation on trains and buses and at transportation terminals. In the wake of this ruling, the Justice Department also successfully moved to end segregation in airports. Finally, in 1964 and again in 1968, Congress passed landmark civil rights legislation that prohibited segregation in public facilities for interstate travel and fulfilled many of the Freedom Riders' dreams.

Civil Rights Movement , One of the distinguishing features of the civil rights movement of the mid-twentieth century in America was that it was both a grassroots and a relig… John Francis Campbell , Campbell, John Archibald CAMPBELL, JOHN ARCHIBALD John Archibald Campbell was a politician, a statesman, and an associate justice on the U.S. Supreme… Censorship , History Censorship is essentially a “policy of restricting the public expression of ideas, opinions, conceptions and impulses which have or are belie… First Amendment , When the U.S. Constitution was written in 1787, it contained few guarantees of individual freedom and liberty. Many members of the Federalist Party a… African National Congress , The African National Congress (ANC), the oldest black political organization in South Africa until it became multiracial in the 1990s, was founded on… Liberty , The state of being free; enjoying various social, political, or economic rights and privileges The concept of liberty forms the core of all democrati…