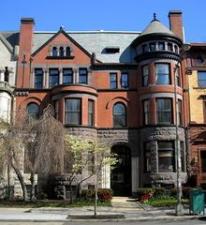 Carter Glass sponsored important banking laws of the twentieth century, among them the glass-steagall acts of 1932 and 1933 (48 Stat. 162). He wrote and sponsored the legislation that established the federal reserve System in 1913. He was also a key player in making amendments to the system during the decades following its establishment. A Virginia Democrat, he served as secretary of the treasury under woodrow wilson and was a member of the House of Representatives and the Senate.

Glass was born January 4, 1858, in Lynchburg, Virginia, the youngest of twelve children. His mother, Augusta Christian Glass, died when he was two years old, and Glass was raised by a sister ten years older than he. His father, Robert H. Glass, was the editor of the Daily Republic.

Following the Civil War, Glass's father turned down an offer of reappointment to his old position as postmaster general, because he did not want to be on the payroll of the nation he had just fought. Having lived through a financially strapped childhood during the Reconstruction period, Glass would as an adult consistently oppose strong centralized control by the federal government except in emergencies.

Glass left school at age fourteen to begin a printer's apprenticeship at his father's paper. He completed his apprenticeship in 1876 when the family moved to Petersburg, Virginia. Glass soon moved back to Lynchburg to work as an auditor for the railroad. In 1880 he became the city editor, and then the editor, of the Lynchburg News. With savings and the financial backing of friends, he purchased that newspaper in 1888. The same year he married Aurelia McDearmon Caldwell, a teacher. In the early 1890s, Glass bought and consolidated other Lynchburg newspapers.

"The main purpose of the [Glass-Steagall] bill … was to prevent … the use of the Federal Reserve banking facilities for stock-gambling purposes."
—Carter Glass

In 1899 Glass was elected to the Virginia state senate, where he was put on the committee of finance and banking. During his career as a state legislator, he was an active debater on suffrage for African Americans, the subject of the Fourteenth and Fifteenth Amendments to the U.S. Constitution. He supported restricting voting rights for illiterate former slaves on the theory that these votes were used by those in power to maintain their power. He also argued in defense of the eighteenth amendment, prohibiting the sale of alcohol. In 1933, however, he voted for its appeal on the grounds that it was futile to maintain a law that could not be enforced.

In 1902 Glass was elected to the U.S. House of Representatives, where he served until 1918. In 1904 he was appointed to the Banking and Currency Committee. He devoted the next several years to studying the topic of banking, and introduced few bills during this period.

The U.S. banking system of the late nineteenth and early twentieth centuries was unstable, leading to a series of banking panics over a thirty-four-year span. By the end of the nineteenth century, banks were largely independent from, and often in competition with, one another. The relatively young U.S. banking system was burdened primarily with a lack of flexibility in lending (or rediscounting) policies and currency availability, as well as weak supervision and inadequate check collection systems.

In the first decade of the twentieth century, Glass began crafting a bill to address the need for banking reform. In 1912 Democrat Wilson was elected president of the United States. Glass, now chair of the House Banking Committee, enlisted and got Wilson's support for his reform bill.

The Federal Reserve Act, 12 U.S.C.A. § 221 et seq., the most radical banking reform bill in U.S. history, was passed into law December 23, 1913. In presenting his bill to the House, Glass said in his closing remarks, "I have tried to reconcile conflicting views, to compose all friction and technical knowledge of the banker, the wisdom of the philosopher, and the rights of the people."

According to its preamble, Glass's bill was created to "provide for the establishment of Federal reserve banks, to furnish an elastic currency, to afford means of rediscounting commercial paper, to establish a more effective supervision of banking in the United States, and for other purposes." It provided the establishment of up to twelve Federal Reserve banks (district banks) to develop policy with the seven-member federal reserve board in Washington, D.C. (This board's title was later changed to the Federal Reserve Board of Governors.) Glass's plan also required all nationally chartered banks to be members of the Federal Reserve System and weakened the power of private banks. Although the Federal Reserve System would be criticized for failing to stave off the Great Depression in the 1930s, it would be credited with helping control the effects of a 1987 stock plunge.

During the years leading up to world war i, Glass headed a committee that investigated the act's effectiveness and made amendments as needed. Three test cases in 1923 and 1926 resulted in various changes in the act, which continues to be altered as circumstances dictate.

Glass was appointed Secretary of the Treasury in late 1918 and worked to develop and promote a new "Victory loan" under Wilson's administration (which was renamed "Fifth Liberty Loan" because the V looked like the Roman numeral for 5) as World War I drew to a close. These loans were bonds that the U.S. government encouraged Americans to buy to help generate revenue for war debts and for rebuilding war-torn Europe. In February 1920, Glass resigned as secretary and accepted a vacant seat in the U.S. Senate.

In early 1920, an election year, sentiments against Wilson grew. A movement took hold to select Glass as the Democratic presidential candidate. But Glass, a strong supporter and close friend of Wilson's throughout his lifetime, did not support the effort. warren g. harding, a critic of the Federal Reserve Board, was elected president in 1920.

In the late 1920s, conditions began to develop that would lead to a stock market crash and the subsequent Great Depression. In fall 1928 Glass wrote an article addressing his concern that the Reserve System was being misused for financial speculation. In early 1929 he gave a speech on the Senate floor warning of financial disaster and urging that action be taken against individuals abusing the system in gambling ventures.

Glass also began work on amendments to reduce the consequences of the disaster he suspected was coming. This work resulted in the Glass-Steagall Acts of 1932 and 1933, sponsored by Glass and Representative Henry B. Steagall. The Glass-Steagall Acts marked the third time in early U.S. history that a major crisis precipitated banking reform. (The first was the Civil War and the development of the National Banking System; the second was the panic of 1907 and the development of the Federal Reserve Act.)

The act of 1932 liberalized terms under which member banks could borrow from the Federal Reserve System. The act of 1933, also called the Banking Act of 1933, established the federal deposit insurance corporation. This institution guaranteed bank depositors' savings, separated commercial banking from investment banking and insurance underwriting, regulated interests on time deposits, and increased the power of the Federal Reserve Board.

Carter Glass (January 4, 1858–May 28,1946) was a U.S. senator from Virginia. Along with his colleague Senator Harry Byrd, Glass was a leading member of the Republican-Democratic congressional coalition that emerged to oppose the New Deal by 1938. In 1934 Glass declared that the New Deal "is not only a mistake; it is a disgrace to the Nation." According to historian James T. Patterson, Glass voted against the Roosevelt administration 81 percent of the time, more than any other Democrat.

Born in Lynchburg, Virginia, Carter Glass began his career in 1880 as city editor of the Lynchburg News; he soon rose to the position of editor and purchased the newspaper in 1888. As an outspoken editor, Glass grew more involved in politics. He was elected to the Virginia State Senate in 1899, and in 1901 he served as a delegate to the Virginia state constitutional convention, where he helped to devise voting restrictions that disfranchised African Americans. In 1902, Glass was elected to the U.S. House of Representatives from the sixth district of Virginia. As a member of the House Banking and Currency Committee, Glass was responsible for drafting the Federal Reserve Act of 1913. A close ally of President Woodrow Wilson, Glass became his secretary of the treasury in 1919.

In 1920, upon the death of Senator Thomas Martin, Virginia Governor Westmoreland Davis appointed Glass to the U.S. Senate. The efficiency of the Virginia Democratic Party machine, along with its tightly restricted electorate, ensured Glass's repeated reelection to the Senate. This enabled Glass to become an early and outspoken critic of the New Deal. As one of the architects of the national financial system, he decried currency devaluation and the abandonment of the gold standard. He believed such federal programs as the Agricultural Adjustment Administration and Social Security undermined states' rights. Illness prevented Glass from being an active senator after 1942, but he remained in office until his death in 1946.

Patterson, James T. Congressional Conservatism and the New Deal: The Growth of the Conservative Coalition in Congress, 1933–1939. 1967.

Encyclopedia of the Great Depression