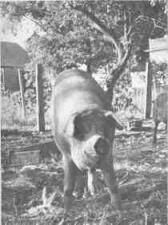 Excerpt from the Agricultural Adjustment Act

The Great Depression hit American farmers especially hard. With prices of commodities and farmers' income at historic lows, the Dust Bowl destroyed what little productivity was left in many farms. White farmers from Oklahoma joined the exodus that black farmers from the Mississippi Delta had already begun during the 1920s. The agricultural crisis profoundly affected the 1932 presidential campaign. During his successful run for the presidency, Franklin D. Roosevelt promised comprehensive agricultural relief.

Roosevelt's plan to revive the American economy was called the New Deal. During the first hundred days of Roosevelt's administration, Congress passed fifteen major pieces of legislation designed to reduce unemployment. The Agricultural Adjustment Act of 1933 (48 Stat. 31), took its place alongside the National Industrial Recovery Act as a leading component of this relief package. The Agricultural Adjustment Act (AAA) pledged to restore the purchasing power enjoyed by farmers in the years immediately preceding World War I. This concept, called "parity," became a rallying point for farmers throughout the New Deal and would dominate agricultural policy after World War II. The AAA was designed to restore parity prices for "basic agricultural commodities"—initially defined as wheat, cotton, corn, hogs, rice, tobacco, and milk—by reducing supplies. Benefit payments would compensate participating farmers who agreed to curb acreage or kill excess livestock.

The AAA levied a tax on processors of agricultural commodities. Cotton gin operators, for instance, would be taxed for the benefit of cotton farmers who had agreed to reduce their acreage. The Department of Agriculture characterized this tax as "the heart of the law," because the proceeds from this tax would simultaneously enhance farmers' purchasing power and increase commodity prices by reducing supplies. To undertake the taxing of processors and to make benefit payments to participating farmers, the AAA relied on Article I, section 8, clause 1 of the Constitution, which empowers Congress "to lay and collect Taxes, Duties, Imposts and Excises, to pay the Debts and provide for the common Defence and general Welfare of the United States." Older decisions such as United States v. E.C. Knight Co. (1895) had established that Congress's power under Article I, section 8, clause 3 "to regulate Commerce with foreign Nations, and among the several States, and with the Indian Tribes" did not extend to productive activities such as manufacturing, agriculture, and mining. In other words, the Constitution drew a distinction between regulating commerce and regulating production. When the Supreme Court invalidated the National Industrial Recovery Act in A.L.A. Schechter Poultry Corp. v. United States (1935), it not only endorsed that old distinction but also held that retailing likewise lay beyond Congress's power to regulate interstate commerce.

In United States v. Butler (1936), the Supreme Court invalidated the Agricultural Adjustment Act of 1933. Justice Owen Roberts, writing for himself and five other justices, held that the AAA "invade[d] the reserved rights of the states" by endeavoring "to regulate and control agricultural production, a matter beyond the powers delegated to the federal government." Specifically, the Court held that the AAA violated the Tenth Amendment to the Constitution, which declares: "The powers not delegated to the United States by the Constitution, nor prohibited by it to the States, are reserved to the States respectively, or to the people." Assuming that Congress could not directly compel farmers to reduce acreage or cull livestock, the Court held that Congress "may not indirectly accomplish those ends by taxing and spending to purchase compliance."

Emboldened by the apparent change in the Supreme Court's attitude toward the constitutionality of the New Deal, Congress passed a second Agricultural Adjustment Act, designated as the Agricultural Adjustment Act of 1938. Rather than using the proceeds from taxes on processors to motivate farmers to lower production in exchange for benefit payments, the 1938 act applied marketing quotas and overproduction penalties directly. For example, the tobacco program established by the 1938 act triggered a national marketing quota whenever the secretary of agriculture determined that supplies would exceed a threshold called the "reserve supply level." The secretary would apportion the quota among tobacco farms nationwide, and penalties would be assessed against auction warehouses marketing tobacco from a farm that had exceeded its quota.

In Mulford v. Smith (1939), the Supreme Court upheld the 1938 act with little fanfare. Even though the marketing quotas imposed by the 1938 act intruded far more aggressively into the agricultural economy than the processing taxes at issue in the 1933 act, Mulford found no fault in the 1938 act. Just three years earlier the 1933 act had been condemned as an unconstitutional stratagem by the federal government to interfere in agricultural markets. Yet the ruling in Mulford blessed the 1938 act as a program "intended to foster, protect and conserve [interstate] commerce."

Three years later, in Wickard v. Filburn (1942), the Supreme Court revisited the Agricultural Adjustment Act of 1938. Whereas the tobacco in Mulford was specifically destined for interstate sale at an auction, Filburn involved an Ohio farmer who fed his excess wheat to livestock on his own farm. In Filburn the Court held that the act could apply even to a seemingly trivial amount of excess production that never crosses state lines or otherwise affects interstate traffic in wheat, as long as any regulated farmer's "contribution, taken together with that of many others similarly situated, is far from trivial."

Wickard v. Filburn laid to rest any remaining doubt about the constitutionality of federal statutes regulating agricultural production, prices, and incomes. Together with the Agricultural Act of 1949, the Agricultural Adjustment Act of 1938 now constitutes the major part of so-called "permanent legislation" that provides federal support for commodity prices and farm incomes. Periodic "farm bills," such as the Food Security Act of 1985 and the Federal Agriculture Improvement and Reform Act of 1996, make temporary changes in support levels and program design by amending the "permanent legislation" for a specified period, typically five or six years. The programs authorized by permanent agricultural legislation and by periodic farm bills are diverse and complex. They include production flexibility contract programs, nonrecourse loans for marketing assistance, marketing quotas, marketing agreements, crop insurance, and the Conservation Reserve Program.