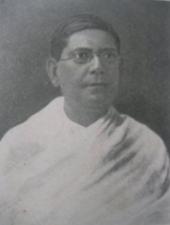 DAS, CHITTA RANJAN (1870–1925), Indian nationalist leader Popularly known as Deshabandhu (Friend of the Land), Chitta Ranjan (C. R.) Das emerged in the early decades of the twentieth century as a prominent moderate nationalist leader. One of the high-profile barristers at the Calcutta High Court, C. R. Das achieved instant fame and name recognition throughout Bengal for successfully defending Aurobindo Ghose (Sri Aurobindo), who was charged with sedition. The Ghose case not only greatly boosted Das's reputation as a trial lawyer, it also inducted him into the public arena and nationalist politics. By the time he passed away in 1925, Das and Motilal Nehru were the two leading "moderates" among the increasingly extreme and cacophonous voices of the Indian nationalist movement.

Das was born in Kolkata in 1870 to an upper middle class Brahmo (reformed Hindu) family. Originally from Bikrampur in the Munshiganj district of Bangladesh, Bhuban Mohan Das, C. R. Das's father, was a solicitor at the Calcutta High Court. Educated at the London Missionary Society School in South Calcutta, C. R. Das passed the entrance examinations in 1885, and graduated from Presidency College in 1890. Thereafter, he went to England to join the Inner Temple and was called to the Bar in 1894. He returned to Kolkata and started practicing law as a barrister at the Calcutta High Court. His reputation soared as a professional and as a nationalist politician in the aftermath of the swadeshi movement in Bengal (the first major phase of a militant nationalist movement protesting against the British authorities' decision in 1905 to divide the province of Bengal in two parts—one with a Muslim majority, the other Hindu); he proved a staunch and successful defender of swadeshi activists imprisoned by the British.

Das joined forces with Surendranath Banerjea and Bipin Chandra Pal in opposing the partition of Bengal. After the partition plan was abandoned in 1911, Das appeared not to be politically active, except for presiding over the Bengal Provincial Conference in 1917, until 1921. In that year, he promptly responded to Mahatma Gandhi's call for noncooperation with the government. He took an active part in the boycott of the visit of the prince of Wales to Kolkata in 1921. However, he opposed, even condemned, Gandhi's move to withdraw the noncooperation movement following the outbreak of violence in the country. He called it a "serious mistake."

He opposed the Congress Party's policy decision to boycott the legislative councils. Instead, he proposed in his Council Entry Program to seek noncooperation from within the councils. He resigned from his position as president of the Congress Party in 1922 as his voice and vote did not appear to count. He joined Motilal Nehru, Hakim Azmal, and the Ali brothers (Muhammad and Shaukat) to form the Swarajya Party. As a leader of the new party, he devoted his energies to bringing about Hindu-Muslim amity and unity. He and the Swarajya Party offered to give Hindu-Muslim collaboration a concrete shape with an agreement, signed by leaders of the two communities in Bengal, which became known as the Bengal Pact. However, the Congress Party rejected it, as did some of the senior Hindu Bengali leaders, including Surendranath Banerjea and Bipin Chandra Pal.

During his last years, Das served as the mayor of Kolkata. His death at age fifty-five was mourned by crowds of Hindus and Muslims. It was indeed a blow to the potential of Hindu-Muslim unity in Bengal. He is fondly remembered to this day in Bangladesh and India's West Bengal for his anticolonial and nonsectarian beliefs and policies, and for the personal sacrifice he made for the great cause in which he fervently believed. Known for his lavish sartorial style (he had the reputation of getting his suits tailored and laundered in Paris) and high living, he renounced that lifestyle in 1921 in favor of simple swadeshi comportment and living.

Chitta Ranjan Das (1870-1925) was an Indian lawyer and poet who became a nationalist leader. His main aim was swaraj, or self-rule, for India.

Chitta Ranjan Das was born in Calcutta on Nov. 5, 1870, into a progressive Brahmo family. His father, Bhuvan Mohan, was a solicitor and a journalist who edited the English church weekly, The Brahmo Public Opinion. Das graduated from Presidency College in Calcutta in 1890 and went to England to compete in the Indian civil service examination. He failed the exams but joined the Inner Temple and was called to the bar in 1892.

Das returned to India in 1893 and started law practice in the Calcutta High Court. Following his successful defense of Aurobindo Ghose in the 1908 Alipur bomb conspiracy case, Das rose steadily and built a lucrative profession.

From his early youth Das was a nationalist. He was an active member of the Students' Association (1886), where Surendranath Banerjee had lectured on patriotism. At Presidency College, Das organized an undergraduate association and moved for permitting the use of Bengali in university examinations. He came in close contact with Bipin Chandra Pal and Aurobindo Ghose and helped them in publishing the Bande Mataram, an English weekly for propagating the ideals of swaraj.

Das was politically most active between 1917 and 1925. In 1917 he presided over the Bengal Provincial Conference and put forward a plan for village reconstruction through the establishment of local self-government, cooperative credit societies, and the regeneration of cottage industry. The same year he began to attend the Indian National Congress sessions regularly and was elected to all important committees. His powerful oratory, political foresight, and tact gave him a leading position in the Congress. He denounced the Montagu-Chelmsford Reform, which established a dyarchy for India, and joined Gandhi's noncooperation movement in 1920. He toured the whole country, carrying the new creed to every door. In 1921 he was arrested with his wife and son and sentenced to 6 months' imprisonment. The same year he was elected president of the Ahmedabad Congress.

On the failure of Gandhi's noncooperation movement, Das devised a new strategy. As president of the Gaya Congress (1922), he advocated an obstructionist policy inside the legislative councils with a view to mending or ending the dyarchy. But the majority in the Congress rejected his proposal. Thereupon, Das formed the Swarajya party with Motilal Nehru.

The Swarajya party gained tremendous success in Bengal and the central provinces and won majority seats in the legislative councils (1924). In Bengal the party inflicted repeated defeats upon the government, and the British bureaucracy in its earlier form met its doom in Bengal. In 1924 the Swarajists captured power in the Calcutta Corporation, and Das became the first popularly elected mayor of Calcutta.

Das realized that Hindu-Moslem unity was essential for the attainment of swaraj. In 1924 he formulated his famous Communal Pact to promote permanent peace between India's two major communities. He also wanted an assimilation of Eastern spirit and Western technique. He envisioned a pan-Asiatic federation of the oppressed nations and advocated India's participation in it. For his devotion to the cause of self-rule he gained the title Deshabandhu (friend of the country).

Das's genius was also revealed in the field of literature. He founded and published a literary magazine, Narayan (1914), and composed a number of poetical works. His first collection of poetry, Malancha (1895), raised a storm of protest among Brahmos. He was branded as an atheist, and in 1897 the Brahmo leaders boycotted his marriage. His successive works, Mala (1904), Sagar Sangit (1913), and Kishore-Kishoree and Antaryami (both 1915), reveal a Vaishnava devotionalism. Das died in Darjeeling on June 16, 1925.

Hammock , Hammock Hammock, a woven portable bed hung from posts or hooks, originally produced by indigenous peoples from crude cotton or palm fibers, also know… Pietro Berrettini Da Cortona , Cortona, Pietro Berrettini da Cortona, Pietro Berrettini da (1596–1669). With Bernini and Borromini, one of the great masters of Roman Baroque. Train… Tristan Da Cunha , TRISTAN DA CUNHA, short form Tristan. A British dependency in the South Atlantic. Language: English. The Portuguese discovered SAINT HELENA and the T… Theravada , Theravāda is the dominant form of Buddhism in Cambodia, Laos, Myanmar (Burma), Sri Lanka, and Thailand. It remains a central component of the Buddhis… Vasco Da Gama , The Portuguese navigator Vasco da Gama (ca. 1460-1524) was the first to travel by sea from Portugal to India. The term "Da Gama epoch" is used to des… Da Capo , Skip to main content da capo da capo (It., abbreviates to D.C.). From the head. A term meaning ‘Repeat from the beginning until you come to the word…