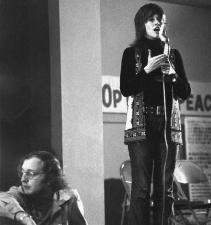 The American writer and political activist Thomas Emmet Hayden (born 1939) was one of the few radical leaders of the 1960s to outlast the movement. He was admired for remaining alive politically without sacrifice of his principles.

Tom Hayden was born Dec. 11, 1939, in Royal Oak, Michigan, into a middle class family and attended the University of Michigan, graduating with an A.B. in 1960. During his college years he joined the Student Nonviolent Coordinating Committee, participating in its dangerous work for civil rights in the South. During a voter registration campaign he was beaten and jailed in McComb, Mississippi. Hayden was a co-founder of the Economic Research and Action Project (ERAP), which attempted to mobilize poor people in their own behalf. Hayden led the ERAP program in Newark, New Jersey, until the riots of 1967 put an end to it. He also co-founded the Students for a Democratic Society (SDS) and was an author of its manifesto, "The Port Huron Statement." Genuinely democratic and non-violent at first, the SDS fell victim to the revolutionary posturing of the times. As it drifted toward terrorism and extinction, Hayden became caught up in the anti-Vietnam War movement.

He twice visited North Vietnam in the 1960s, returning from his second trip with three American prisoners of war placed in his custody by the North Vietnamese government. Unlike some Americans who opposed the war chiefly because of its cost in blood and treasure, Hayden favored a Communist victory. He argued the point in a book coauthored with Staughton Lynd, The Other Side (1967). As a project director of the National Mobilization Committee to End the War in Vietnam, he helped organize antiwar demonstrations during the Democratic National Convention in 1968. As a result he became one of the "Chicago Seven" defendants in what was probably the most celebrated political trial of the era. He and three others were convicted of crossing state lines to incite riot, and all seven were indicted for contempt of court. But on appeal their convictions and indictments were dismissed. In 1971 Hayden participated in a demonstration on behalf of People's Park in Berkeley, California, during which state troopers killed a student.

As the radical era drew to a close Hayden, like his peers, was in danger of becoming politically obsolete. Most New Leftists failed to make the transition. A few became urban terrorists. Others clung to the old faith and sank out of sight. Still others made their peace with a system that had proved to be both more resistant and more resilient than expected. Hayden almost alone found another way. After several years of travel and speeches, including campaign work for George McGovern in his run for the presidency in 1972, Hayden took up electoral politics. With the valuable aid of his second wife, actress Jane Fonda, he ran for a California seat in the U.S. Senate in 1976. Though defeated in the Democratic primary, Hayden captured 40 percent of the vote, a remarkable feat for someone so notorious. He then organized the Campaign for Economic Democracy (CED), which advocated liberal reforms. With its help he was elected to the California State Assembly in 1982.

Hayden wanted to democratize the economy by means of tax reform, public ownership of utilities, greater equality of income among the races and between the sexes, and curtailment of corporate abuses. Hayden opposed nuclear energy, promoting solar power as the desirable alternative. Even at his most radical Hayden never entirely lost sight of the real world. He was the New Left's best organizer and one of its most prolific writers. As a working politician he made ample use of these talents and would probably have been heard from even had he married less spectacularly. There is no doubt, however, that Fonda's wealth and glamour and the publicity the couple commanded benefitted his career in no small measure.

In the mid-1980s, Hayden's CED was reorganizied as Campaign California and began to "support entrepreneurial activity" in the legislative fight against environmental damage. Despite his emotional involvement with Hanoi during the Vietnam War, Hayden's belief in participatory democracy enabled him to engage his ideas and energies within the system and make valuable contributions toward environmental and educational initiatives as a member of the California State Assembly (1982-1991).

In 1992, Hayden ran successfully for the California State Senate, in which body he espoused environmental and educational issues. However, his radical past disturbed the more conservative elements among politicians and the electorate, and impeded his political goals. His opponents on the right recalled to public attention his radical past and anti-war involvement in order to defeat his legislative initiatives. In 1994, he was defeated in his bid for the state governorship largely due to his past extremist activities. This opposition tended to make Hayden more conservative, and he has even spoken in favor of the death penalty.

In the California State Senate, Tom Hayden chaired or was a member of committees on Energy, Natural Resources and Wildlife, Housing and Urban Affairs, Transportation and Public Safety.

Several recent volumes are dedicated to studying the student upheavals and political upheavals and turmoil of the Vietnam Era, e.g., David DeLeon's Leaders from the 1960s: A Biographical Sourcebook of American Activism, Westport, Connecticut: Greenwood Press (1994). The Los Angeles Times (August 13, 1995) ran an article by Elizabeth Mehren which traced the subsequent careers of the figures involved in the Activist Movement of the 1960s.