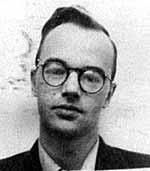 The German-born physicist Klaus Fuchs (1911-1988) was one of the Soviet Union's most effective spies operating in Britain and the United States in the critical period during and after World War II.

Fuchs revealed the American designs for the atomic bomb to a Soviet spy shortly after they were drawn up, and he passed along information about the nascent hydrogen bomb as well. He is thought to have speeded construction of a Soviet nuclear device by perhaps three years. Fuchs's eventual exposure was the first in a long line of incidents that revealed grave flaws in Britain's national security apparatus, and his story, which reads in places like a spy thriller, bears on the difficulty of combating the nuclear proliferation in the world today.

Klaus Emil Julius Fuchs was born on December 29, 1911, in Rüsselsheim, Germany, near Darmstadt in the German state of Hesse. He was influenced heavily by his father, Emil, a Quaker minister with a strong socialist and idealist orientation that he impressed upon all his children. When the family later moved to the city of Kiel they became known as the Red Foxes of Kiel, both for their red hair and their leftwing philosophies (the name Fuchs means “Fox” in German). Fuchs became interested in politics as a student at the University of Leipzig in 1930. He joined the socialist Social Democratic Party but was disillusioned after that party made accommodations with conservatives in the maneuvering that accompanied Adolf Hitler's rise, and his politics moved leftward. At the University of Kiel he joined the Communist Party of Germany, which he and many other leftist Germans felt represented the last bastion of resistance to Hitler.

Conditions for Fuchs and his family deteriorated rapidly as the Nazis' grip on Germany tightened, and harassment caused Fuchs's mother to commit suicide. Fuchs and his siblings scattered, and Fuchs decided to leave Germany. In September of 1933 he arrived in England. By that time he was a committed Communist who took orders from the Communist Party in Moscow, and he left Germany only to escape persecution. “I was sent out by the Party,” he was quoted as saying by biographer Robert Chadwell Williams in Klaus Fuchs: Atom Spy. “They said that I must finish my studies because after the revolution in Germany people would be required with technical knowledge to take part in the building up of the Communist Germany.”

Fuchs took his instructions seriously. He enrolled in a Ph.D. program at the University of Bristol, receiving his degree in 1936 after writing a thesis titled “The Cohesive Forces of Copper and the Elastic Constants of Monovalent Metals.” His Communist leanings were noted by British officials, but in 1930s Britain, with many Britons viewing the Soviet Union as a bulwark against German fascism, his political positions were not thought to represent a significant threat. Fuchs moved on to the University of Edinburgh and continued to do physics research. Supporting himself on a fellowship stipend, he published a series of articles in 1939 and 1940 dealing with electromagnetic radiation and wave functions.

After war broke out, Fuchs fell under more suspicion because he was German than because he was a Communist. In 1940 he was questioned in Edinburgh, arrested, and sent to an internment camp run by the Canadian army near Quebec City, Quebec. Later he was transferred to another Quebec camp near Sherbrooke. Conditions were difficult in these camps; in the Sherbrooke facility, only five faucets and six latrines were provided for the 720 prisoners. However, Fuchs and other prisoners organized a camp university at which he gave physics lectures. Fuchs was released from the internment camp and taken back to Britain at the behest of two British scientists: Max Born, his former advisor in Edinburgh, and Rudolf Peierls, a scientist working on Britain's atomic research program centered at Birmingham University. Their intercession was successful because Fuchs was on a list of scientists wanted for work on Britain's atomic bomb enterprise, which was code-named the Tube Alloys project.

According to John Crossland of the Times of London, an MI5 security service agent named Griffiths wrote to his superiors: “If anything very serious against Fuchs should come to light we could consider the cancellation of his permit. In the meantime perhaps it would be as well to warn the Ministry of Atomic Production of this man's communist connexions.” Although disregarded owing to the growing alliance between Britain and the Soviet Union, the warning was a pertinent one. Fuchs quickly made contact with the Soviet Embassy in London and informed personnel there that he had been assigned to sensitive atomic work. They placed him in contact with a female Soviet military intelligence agent, Ruth Beurton, code-named Sonia.

Fuchs became a naturalized British citizen in 1942, enhancing his security credentials despite continuing misgivings from British intelligence agencies. His value as a Soviet resource increased dramatically in 1943 when he became one of a group of British scientists chosen to join the U.S. atomic bomb project in Los Alamos, New Mexico, known as the Manhattan Project. Soviet intelligence had its own code name for the project, “Enormoz,” and Fuchs was referred to as agent Charles. Fuchs made important contributions to the atomic bomb as it developed, focusing on detonation devices, and he was present at the Trinity test, the world's first test of a nuclear weapon, on July 16, 1945. He had close working relationships with Edward Teller and other designers of American nuclear weaponry.

Fuchs's contact in America was a Soviet spy named Harry Gold, whom he knew as Raymond. Their initial meeting took place in New York City, where Fuchs arrived before traveling to New Mexico. They agreed to meet on a Saturday afternoon, identifying each other as follows: Gold carried a pair of gloves and a green-covered book, and Fuchs carried a handball. Subsequent meetings after Fuchs went to Los Alamos were often accomplished during Fuchs's vacation time, with his sister Kristel, who lived in Cambridge, Massachusetts, sometimes serving as intermediary. Fuchs passed along detailed drawings of American nuclear weapon designs, enabling the Soviet Union to build its own atomic bomb well in advance of the timeline its own capabilities would have permitted.

In 1946 Fuchs returned to Britain and was assigned to the Harwell Atomic Research Establishment as senior principal scientific officer. He continued to meet with Sonia and other Soviet handlers, using as rendezvous points a country road and a south London pub called the Spotted Horse. Fuchs was instructed to leave chalk marks on a sidewalk near a railway station to confirm a meeting, and for emergency meetings he was supposed to throw a copy of the magazine Men Only into the garden of a specific house. During this period he transmitted to Soviet intelligence what he knew of the incipient hydrogen bomb, which he had heard Teller discuss. Fuchs's hydrogen bomb information is thought to have been less useful than the materials he passed along about the atomic bomb, as the eventual hydrogen bomb tested by the Americans was based on a design that was different from the ones developed while Fuchs was in Los Alamos. He did help the Soviets keep abreast of developments in the American hydrogen bomb program.

Fuchs did all this because he was devoted to the Soviet Union and its aims. The stress of leading a double life began to take its toll on him, however, and he was troubled by the increasing brutality of Soviet dictator Joseph Stalin's reign in the late 1940s. “I used my Marxist philosophy to establish in my mind two separate compartments,” he said in his eventual confession, as quoted by Williams. One compartment was the sphere of his British identity “in which I allowed myself to make friendships, to have personal relations, to help people and to be in all personal ways the kind of man I wanted to be.” The other compartment contained his status as a loyal Communist. “It appeared to me at the time that I had become a ‘free man’ because I had succeeded in the other compartment to establish myself completely independent of the surrounding forces of society. Looking back at it now the best way of expressing it seems to be to call it a controlled schizophrenia.”

In 1949, in poor health and with these questions weighing on his mind, Fuchs made a fatal mistake. He was already under close surveillance as a possible source of unexplained leaks of information on Britain's nuclear program. His father, Emil, had moved to Communist East Germany, and Fuchs reported this fact to Harwell security officers, warning that the Soviets might use that information to try to blackmail him. He was subsequently questioned by MI5 investigator Jim Skardon. Fuchs initially denied knowledge of the leaks, but on January 24, 1950, he asked Skardon to meet for lunch at a pub near the Harwell establishment. Skardon noted that Fuchs seemed to be under a good deal of stress, and Fuchs began to lay out his story. Curiously, Fuchs believed that he would still be able to maintain his position at Harwell.

Fuchs was put on trial and convicted of espionage. On March 1, 1950, he was sentenced to 14 years at the Old Bailey prison, a sentence lightened by the fact that Britain and the Soviet Union had been allies during the time most of the crimes had been committed. Fuchs was a model prisoner who taught classes and wrote articles for the Old Bailey prison magazine. He was released after nine years, in 1959, for good behavior and was deported to East Germany. A few days after his arrival there he married Greta Keilson, whom he had met in France in the 1930s. Fuchs became a member of the Central Committee of the East German Communist Party and served until 1979 as deputy director of the country's nuclear research institute. He died in East Berlin on January 28, 1988.

oxford
views updated
Fuchs, Klaus (1912–88) German physicist. Klaus worked on the atom bomb in the USA (1943) and returned to Britain (1946) to head the theoretical physics division of the Atomic Research Centre at Harwell. Imprisoned (1950) for passing secrets to the Soviet Union, his British citizenship was revoked. After release (1959), he went to Germany to work at a nuclear research centre.