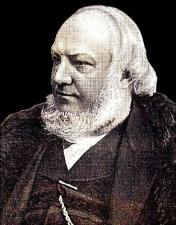 Jacob Moleschott, a physiologist and philosopher often regarded as the founder of nineteenth-century materialism, was born in Holland. After studying at Heidelberg, Moleschott practiced medicine in Utrecht. He later became lecturer in physiology at Heidelberg. The controversial doctrines expressed in his book, Der Kreislauf des Lebens (The circuit of life; Mainz, 1852), and the materialistic tendencies of his teaching forced him to move to Zürich. He later became professor of physiology at Rome, where his lectures were popular and his important research on diet earned him respect and many honors.

Materialism at that period was a philosophical trend with political, social, and scientific implications. The state-controlled German universities had produced an official philosophy (a watered-down Hegelianism) that was used as a defense against social reform and as a shield for religion or the spiritual life. Certain important scientists held conservative views about the role of science. The biologist Rudolf Virchow, for example, believed that all speculation about consciousness should be left to the church or even to the state. The German materialists, attempting to free scientific inquiry from such control, saw these conventional philosophical tendencies as obstructing intellectual and social progress.

Moleschott's Der Kreislauf des Lebens went through many editions and helped to spur the materialist movement. The book was directed against Justus von Liebig's theologizing views as he had expressed them in his Chemischen Briefen. Liebig had especially objected to Moleschott's famous statement epitomizing materialist monism: "No thought without phosphorus." The German materialists of this period criticized dualists as being engaged in a system of philosophic double-entry bookkeeping.

Moleschott maintained, as did Ludwig Büchner, that force and matter were inseparable. Force cannot be viewed in an Aristotelian way, nor teleologically, nor as a vital force. It is not an entity separate from a material substratum, but is rather "one of its eternal indwelling properties." Matter cannot occur or be conceived without force, and vice versa; "A force unconnected with matter, hovering loose over matter, is an utterly empty conception."

Thus, any materialism attributing existence to matter independently of force was rejected. Moleschott maintained that to call his theory materialistic in this sense would be as wrong as to call it spiritualistic: "I myself was well aware that the whole conception might be converted, for since all matter is a bearer of force, endowed with force or penetrated with spirit, it would be just as correct to call it a spiritualistic conception." On the other hand, once the restriction of the term material to "dead matter" is given up, Moleschott appears materialistic indeed. He regarded the brain as the source of consciousness and emphasized physical conditions as the major determinants of human life. He was fascinated by circular processes, such as the miner digging lime phosphate from the earth, and the peasant later fertilizing his field with the same chemical. Life circulates through all parts of the world, and with life goes thought.

As was also typical of the materialists of the time, Moleschott emphasized the doctrine of the conservation of matter. This notion, he held, was discovered by the eighteenth-century encyclopedists. Recent science had confirmed it, and future science had to be built upon it. Chemistry is the basic science, and the solution to social questions depends on our discovering the proper way to distribute the matter with which thought and will are bound up. A rigid determinism was emphasized: "Natural law is the most stringent expression of necessity."

Moleschott inveighed against the Kantian thing-in-itself and emphasized the importance of what things could be known as rather than what they are alleged to be. All knowledge, he maintained, presupposes someone who knows and, thus, a relation between the object and the observer. The observer could be an insect or other creature; there is no restriction to man. All existence is by means of qualities; there is no quality that exists other than through a relation. In the case of a man's perceiving a tree, "it is just as necessary for the tree as for the man that it stands to him in a relation that manifests itself by the impression upon his eye."

Moleschott maintained a certain relativism, but also a certain objectivism: "Steel is hard as opposed to soft butter, ice is only cold to the warm hand, trees only green to a healthy eye." He argued that a vorticella with an eye having only a cornea must receive different representations of objects than a spider, which has a more complex eye with lenses. Yet, "Because an object is [exists] only through its relation to other objects, for instance, through its relation to the observer, because the knowledge of the object resolves itself into the knowledge of their relations, all my knowledge is an objective knowledge." Although there are difficulties in understanding Moleschott's doctrine here, it appears to have a strong family resemblance to recent objective relativism.

The German materialists were frequently criticized for promulgating doctrines subversive of received morality, especially theologically sanctioned morality. In general, they did protest against duty-centered, puritanical views of morality and adopted a kind of utilitarian hedonism. However, they did not advocate a continuing round of sensual pleasures. Moleschott argued that even a misguided hedonism was socially less dangerous than some other views of morality: "The erroneous theory of seeking after pleasure will scarcely find half as many disciples, as the rule of priests of all shades had claimed unfortunate victims."

As was true of other contemporary materialistic theories, many of Moleschott's doctrines that once aroused immense wrath seem relatively mild today. His insistence that scientific inquiry is relevant to the solutions of many problems is now commonplace, but it caused shudders in the nineteenth century. The materialists' struggle against giving theological answers to scientific questions seems to have been largely successful.

Moleschott’s father, Johannes Franciscus Gabriel Moleschott, was a physician; his mother was the former Elisabeth Antonia van der Monde. He attended the Gymnasium at Cleves, Germany, then studied medicine at Heidelberg (1842–1845) under Tiedemann, Naegele, and Henle, while also pursuing his interest in the philosophy of Ludwig Feuerbach, Karl Vogt, and Hegel. On 22 January 1845 he received his medical degree with the thesis De Malpighianis pulmonum vesiculis. It had been written under the direction of Jakob Henle, who had instructed him in the use of the microscope. Moleschott then settled in Utrecht as a general practitioner. He was a pupil of G. J. Mulder from 1845 to 1847; in Mulder’s laboratory he met the physiologists F. C. Donders (who did not share his enthusiasm for materialistic monism) and I. van Deen. With them he conducted an extensive scientific and private correspondence, much of which has been preserved.

While still a student Moleschott entered a prize competition sponsored by the Teyler’s Society in Haarlem and received an award. His growing interest in physiology led him to publish, with Donders and van Deen, the first Dutch journal (in German) for anatomy and physiology: Holl̈ndische Beiträge za den anatomischen und physiologischen Wissenschaften (1846–1848). In 1848 Moleschott violently opposed the appointment of H. J. Halbertsma as professor of anatomy and physiology at Leiden because his friend van Deen had been passed over. Moleschott was made Privatdozent in physiology and anthropology at Heidelberg in 1847 and resigned in 1854 after having been sharply reprimanded by the rector and senate because they felt that he was misleading the students. (Among other things, he had spoken out in favor of cremation.) He was appointed professor of physiology at Zurich in 1856, giving an oration, “Licht und Leben,” based upon his own observations. In the following year he started publication of the journal Untersuchungen zur Naturlehre des Menschen und der Thiere, which he edited and which was continued until 1894 under G. Colasanli and S. Fubini.

While in Zurich, Moleschott was especially concerned with research on the cardiac nervous system, the respiratory system, the smooth muscles, and embryology, the last being closely connected with his teaching. At the urging of Cavour he was appointed professor of experimental physiology and physiological chemistry at Turin in 1861. He became professor at the “Sapienza” in Rome in 1879 and later a senator. (For many years he had studied the Italian language and literature; he became an Italian citizen.)

Moleschott’s special interests were in the metabolism of plants and animals, and in the effect of light on it in nutrition. His most important work, Kreislauf des Lebens (1852), concerned the structure and function of the brain and contained arguments against Liebig’s Chemische Briefe and strong statements favoring Moleschott’s own materialistic view of life. The work was highly praised by Humboldt and was translated into French, Italian, and Russian.

It cannot be said that Moleschott possessed great creativity; but he did have a strong love for science, especially experimental physiology. He died of erysipelas at the age of seventy. His library was donated to the University of Turin.

See also In memoria di Jacopo Moleschott (Rome, 1894), which includes a bibliography of his works.