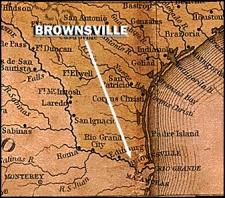 BROWNSVILLE AFFAIR. African American troops have a symbiotic relationship to African Americans in the larger society. Racism and its fallout have been ever present throughout U.S. history. In 1906 the Brownsville affair demonstrated how racial stereotyping governed the unspoken assumptions of those in the army and in the federal government.

After the Civil War, black troops had a distinguished record as "Buffalo Soldiers," and their role in the Spanish-American War drew praise. Despite the heroism of the B, C, and D companies of the First Battalion, Twenty-fifth Infantry, the United States Army, reflecting larger societal attitudes, worried about where to station them. The army chose Brownsville, Texas, a small town on the border with Mexico.

The established facts of what happened in Brownsville were few but clear. How the military and political authorities used those facts and their questionable conclusions would mark the changing ethnic and racial relations in the nation's history. For about ten minutes, close to midnight on 13 August 1906, armed men fired indiscriminately near Fort Brown. A policeman was wounded and one local man was dead. The identity of the shooters was never discovered. Civilians and many of the white officers thought the black troops had gone on a rampage. The evidence was highly circumstantial. Eye-witnesses were few and lacked credibility. Over the next few years several military investigations and a grand jury inquiry followed with inconclusive results. None of the accused was allowed to cross-examine witnesses, and even with less-than-adequate defense no one was found guilty.

The troops were immediately relocated to Fort Reno, Oklahoma, where on 4 October 1906 President Theodore Roosevelt issued an ultimatum that they would be dishonorably discharged if the guilty did not step forward. None did. The men were innocent but Roosevelt and others in a tragic rush to judgment "discovered" a "conspiracy of silence." All 167 black men were dishonorably discharged; over half of the men had spent five years or more in the army and ten of them had over fifteen years of service.

Senator Joseph B. Foraker (R-Ohio), as chairman of the Senate Committee on Military Affairs, opened hearings on the matter. The result only increased doubt about the fairness of Roosevelt's actions. Without a public explanation a military panel announced that 14 men from the original 167 were eligible to reenlist in January 1909. There the situation remained for over sixty-five years.

In March 1971, Representative Augustus F. Hawkins (D-Calif.) introduced legislation to change the dishonorable discharge to honorable on the military records. The secretary of the army, Robert F. Froehlke, so ordered on 22 September 1972.After a national search two men appeared out of the shadows. Edward Warfield, eighty-two, was one of the fourteen men allowed to reenlist, and Dorsie Willis spent over sixty years shining shoes in a Minneapolis barber shop. The issue of compensation took several turns. Meanwhile Warfield died on 14 November 1973, and after complex congressional maneuvers, Willis received $25,000 and ten widows received $10,000 each. Willis died 24 August 1977 at the age of ninety-one. Near death he was quoted as saying, "Some people feel the world owes them a living. I never thought that, but I figured the world owed me an opportunity to earn a living. They took that away from me. That dishonorable discharge kept me from improving my station. Only God knows what it done to the others." Indeed. The Brownsville affair was ended, and the nation had traveled a long way since that midnight incident in a small Texas border town.

Fletcher, Marvin. The Black Soldier and Officer in the United States Army, 1891–1917. Columbia: University of Missouri Press, 1974.A key source.

Weaver, John D. The Senator and the Sharecropper's Son: Exoneration of the Brownsville Soldiers. College Station: Texas A&M University Press, 1997.A moving account of the consequences of the event and how "history" dealt with it.