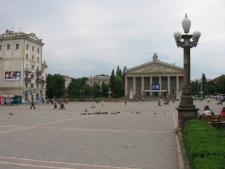 TARNOPOL (Rus. Ternopol ), city in Ukraine, formerly in the province of Lvov, Poland. Jews began to settle in the city shortly after its foundation in 1540. They were granted special privileges by the lord of the city, the hetman Jan Tarnowski, as Jewish residents of his personal domain. The charter granted to Tarnopol in 1550 indicates that Jews were permitted to live in all parts of the city, apart from the marketplace. An organized community had already formed before 1648–49. Jews took an active part in the defense of the city during the many attacks to which it was subjected in the mid-17th century. The royal grant authorizing the erection of a fortified synagogue – already constructed by this time – stipulated that the community was to install artillery loopholes on all sides and to acquire cannon. The members of the community, among whom artisans were singled out, were required to defend the synagogue under the direction of a "Jewish hetman." During the attacks by *Chmielnicki, however, most of the Jews fled, and those who remained were massacred.

Privileges renewed in 1740 allowed the Jews of Tarnopol to live in, and conduct trade in, any part of the city. Jews were permitted to purvey alcoholic liquor and to keep taverns on payment of a liquor duty to the manorial lord. Jewish artisans could engage in crafts, provided that they observed the rules of the Christian guilds and paid a specified sum into the guild funds. The charter also regulated Jewish judicial jurisdiction. The Tarnopol community built up a flourishing economy, controlling the grain and cattle trade, with Jewish business predominating in the city fairs. It also played an important role in Jewish *autonomy in 18th-century Poland-Lithuania (see *Councils of Lands).

Noted rabbis of Tarnopol of this period included Joshua Heshel Babad, who was deposed from the rabbinate in 1718 and returned to office in 1724. He was followed by Jacob b. Isaac Landau, in office until 1777, and Joshua Heshel b. Isaac *Babad between 1809 and 1838.

The position of the Jewish community deteriorated after Tarnopol passed to Austria in 1772. The authority of the manorial lord diminished, and was eventually terminated. Taxation became increasingly burdensome. The census for 1788 registered 6,380 Jewish males and 6,374 females for the district of Tarnopol, including eight subsidiary communities. The Jews were mainly occupied as taverners and retailers, with a considerable number of artisans.

In 1788 Naphtali Herz *Homberg founded the first modern Jewish school in Tarnopol, in which Hirsh Eisenstaedter taught, but it was closed down with similar institutions in 1806. At this time Joseph *Perl began his efforts to establish a Jewish school along his own lines with emphasis on instruction in German and secular subjects, with the assistance of the maskil Dov Ginzburg, and others. Perl only succeeded in 1813, when Tarnopol was under Russian rule (1809–15), and then mainly by financing it himself, and donating the building. From 1814 to 1816 Perl also published a Hebrew periodical, Ẓir Ne'eman (1814–16), in Tarnopol. Perl transferred the school and its prayer house to the community in 1818. It received official recognition as a public school, and its syllabus was revised to conform to that of the general school system. The school met violent opposition from Orthodox circles. It was banned along with the school at *Brody in 1816 by the rabbi of Lvov, Jacob *Ornstein. The *Ḥasidim also opposed it.

About 1813 a Hebrew printing press was set up in Tarnopol by Naḥman Pineles and Jacob Auerbach, the type as well as some of the personnel coming from *Zbarazh. In all, some 25 works were printed in Tarnopol. This printing venture came to an end about 1817, due apparently to the boycott by the Orthodox of a press supporting Haskalah.

In 1838 a bitter conflict flared up in the community between the maskilim and the Orthodox members over the choice of a rabbi. The candidate put forward by the maskilim, S.J. *Rapoport, was nominated with the support of the authorities. However, Perl died in 1839, and Rapoport relinquished the office a year later. The circle of maskilim who had gathered around Perl found increasing adherents, and gained a new intellectual leader in Nachman *Krochmal, who moved to Tarnopol in 1838. Other maskilim were Samuel Leib Goldberg (1807–46), Bezalel *Stern, Isaac Michael Munis, Moses Ḥayyim Katz, Nathan Horowitz (Krochmal's son-in-law), and many more.

In 1843–44 a change in Jewish civic status accorded Tarnopol Jewry electoral and elective rights in the municipality. In the elections to the Austrian parliament following the revolution of 1848 Tarnopol Jews elected one of their number as a delegate. The community was headed by Jacob Atlas, a doctor, from 1846 to 1849, and until 1858 the community was led by the maskilim, to be subsequently replaced by the Orthodox. The school founded by Joseph Perl was extended after 1848, and a girls' school was added.

From the 1860s, the maskilim in Tarnopol, as in the whole of Galicia, showed a growing tendency to assimilate into Polish national life and culture. Simon Dankowicz, a major advocate of *assimilation who had taken part in the Polish uprising of 1863, was nominated in 1890 as preacher in the synagogue founded by Perl. During the 1860s a number of welfare and philanthropic institutions, hospitals, and orphanages were founded in Tarnopol. The rabbi in this period was Joseph *Babad. In 1894 a Zionist society was formed.

Tarnopol Jews suffered severely during World War i, as the city changed hands seven times in the fighting. With the dissolution of the Hapsburg monarchy, a Ukrainian government was organized in Tarnopol, and in December 1918 a Jewish militia of 800 men was formed. In the elections to the Jewish National Council in Western Ukraine, held in March 1919, the Zionists won a clear majority. The council was active until Tarnopol was taken by the Poles, who encouraged the Polish assimilationists within the community and turned over the leadership to them. Between 1922 and 1932 the community was led by representatives of the national lists. Pressure was exerted by the regime in Poland, and commissars were nominated in the leadership.

According to an unofficial source, Bleter far Geshikhte, there were 18,000 Jews in Tarnopol in 1939. As in other communities under Soviet occupation (1939–41), the Jewish community organization was dissolved, political parties were prohibited, Hebrew education was discontinued, and the Yiddish schools were nationalized. After the outbreak of the German-Soviet war (June 1941), a few days after Tarnopol was occupied by the German army, 5,000 Jews were massacred (July 4–11). The Germans fined the Jewish community 1,500,000 rubles. Sixty-three Jews belonging to the intelligentsia were invited to the *Gestapo on the pretext of receiving public appointments, but were all murdered in the Gestapo office. The ghetto established in Tarnopol in September 1941 was the first to be set up in Galicia. Over 12,500 people were crowded into a small area, and for a while it seemed that Jewish life, though extremely difficult, would continue. Attempts were made to renew the Jewish school system, and several orphanages and old age homes were established in the ghetto. The *Judenrat was headed by Gustav Fischer, who was succeeded by Karol Pohoryles. At the same time the ghetto inmates were gradually murdered; on March 25, 1942, 1,000 Jews were shot in the nearby forest. Thousands of Jews were seized in the streets or taken from their homes for forced labor at labor camps in the Tarnopol district. On August 29–31, 1942, over 4,000 Jews from Tarnopol were sent to the *Belzec death camp. On Sept. 30, 1942, a further 1,000 Jews were sent there. During the following winter the remaining able-bodied Jews were separated and put into a labor camp near the ghetto. The final liquidation of the ghetto took place on June 20, 1943, followed by that of the nearby work camp (Aug. 6, 1943). Small numbers of Jews fought from bunkers or joined the partisan fighters in the district.

When the Soviet forces recaptured Tarnopol, about 150 Jews came out from hiding and 200 returned from the Soviet Union, where some of them had served in the Soviet army. A memorial book to Tarnopol Jewry was published as volume 3 of the Enẓiklopedyah shel Galuyyot (1955; Heb; partly Yid; Eng. summary). Tarnopol societies were established by former Jewish residents in Israel and the United States.

A monument erected to the memory of the Jewish martyrs in the Holocaust was completely destroyed in the 1950s. In the late 1960s there were about 500 Jews in Tarnopol. The old Jewish cemetery served as a building site and the later cemetery housed nine garages.

One of the main administrative centers in western Ukraine, by 2005 Tarnopol had a Jewish community center, a Jewish Sunday club, and a women's club.

Odessa , ODESSA ODESSA , capital of Odessa district, Ukraine. In the 19th century it became the industrial and commercial center for southern Russia. In 1865… Moscow , Moscow MOSCOW (Rus. Moskva ), capital of the Russian Federation, and, from the Middle Ages, the political, economic, and commercial center of *Russia… Houston , HOUSTON , port and industrial center in southeastern Texas. Population (est. 2003), 2,009,690; Jewish population, 45,000. Early History Houston was f… Assimilation , ASSIMILATION . In general the sociocultural process in which the sense and consciousness of association with one national and cultural group changes… Galicia (spain) , GALICIA (Pol. Galicia ; Ger. Galizien ; Rus. Galitsiya ), geographical-political region of E. Europe, in S.E. Poland and N.W. Ukraine, extending nort… Dortmund , DORTMUND (Heb. תירמוניא), city in Germany. A privilege issued by Emperor Henry iv to the city of *Worms in 1074 granted the Jews there trading rights…