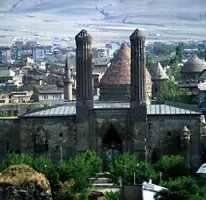 The most important city in eastern Turkey and the capital of Erzurum province.

Erzurum is an ancient frontier town that historically was a site of contestation between Byzantium and Persia, Byzantium and the Arabs, and the Ottoman and Safavi empires. Erzurum is located in a high valley 2078 yards (1,900 meters) of the Kara Su and Aras rivers. During the Ottoman period, the town had a large Armenian population, but the community was forcibly deported during the Armenian genocide of 1915. Later, Erzurum was the site of the first nationalist congress in 1919, which was attended by Mustafa Kemal (Atatürk) and issued the declaration of the Turkish war of independence from Allied occupation. Modern Erzurum has grown into the major urban center of eastern Turkey, with a population of 565,516 (census of 2000). It is the site of a large military base and Atatürk University, and is a trade center, especially for local products such as iron, copper, sugar, grain, cattle, and leather.

Antakya , Ancient Antioch and capital of Hatay province, Turkey. Antakya (Antioch in English) was the capital of Hellenistic and Roman Syria and remained an im… Bukhara , Bukhara (bəkä´rə), city (1991 pop. 231,000), capital of Bukhara region, Uzbekistan, in the Zeravshan River valley. On the Shkhrud irrigation canal sy… Trondheim , Trondheim Trondheim (trôn´hām), city (1995 pop. 142,792), capital of Sør-Trøndelag co., central Norway, a port on the Trondheimsfjord (an arm of the… Belo Horizonte , Belo Horizonte is a major industrial center and the capital of Minas Gerais, the second most populous state in Brazil. Located on a plateau in the mo… Yazd , Yazd Ancient Iranian city located in an oasis in the central desert region. Yazd is the name of a province and its capital city in central Iran. The… Peshawar , Peshawar (pəshä´wär, pəshô´ər), city (1998 pop. 988,005), capital of Khyber Pakhtunkhwa (formerly North-West Frontier Province), NW Pakistan. A road…