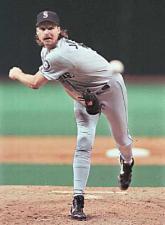 Standing at least a head taller than most of his fellow players, Randy Johnson is one of the tallest players ever to play in Major League Baseball (MLB). At six feet, ten inches, Johnson's towering stature has earned him the nicknames "Big Unit" and "Big Bird." But it's not Johnson's height but his incredible pitching skills that have earned him the greatest fame. Johnson first won glory as baseball's "strikeout king." And he continues to hurl 100-mile-an-hour fastballs and sliders that confound batters, but he also boasts one of the best earned-run averages (ERAs) in MLB history. As compelling a force as

he is on the pitching mound, Johnson is surprisingly modest, avoiding the spotlight away from the game whenever possible. After nearly fifteen years in the game, Johnson was still going strong in the early years of the new millennium, driven by a quest for perfection. As he told AskMen.com, "The one thing that keeps me going is [that] I'm never content with anything…. If I was to retire today, I'd like to think this was my best year. But I'd like to think [that] with hard work and determination, I could get better in certain categories." A five-time winner of the Cy Young Award, Johnson trails only Roger Clemens , a six-time winner. Johnson won the award four years in a row (1999, 2000, 2001, and 2002).

He was born Randall David Johnson in Walnut Creek, California, on September 10, 1963. The son of Bud and Carol Johnson, he boasted a strong throwing arm as a boy but lacked ball control. To improve control, Johnson and his dad marked out a strike zone on the family's garage door. The young Johnson would hurl tennis balls at the door and later check to see how many balls had left their mark within the zone. When he was old enough, Johnson signed up to play in his local Little League but got off to a shaky start when he showed up late for his first game. To make matters worse, he could not locate his team and returned home in tears.

Things looked up for Johnson during his years at Livermore High School, where he developed into a star in two sports—baseball and basketball. In basketball he twice led the East Bay Athletic League in scoring. It was in baseball, however, that Johnson truly made his mark. As a starting pitcher for the Livermore nine, he concluded his high school baseball career in a blaze of glory, pitching a perfect game at the end of his senior year. After graduating from Livermore High in 1982, Johnson went to the University of Southern California on a combined baseball-basketball scholarship. He played both sports his freshman and sophomore years but decided to focus exclusively on baseball his third year at USC.

Drafted by Montreal Expos in 1985

Johnson entered the Major League Baseball (MLB) draft in 1985 and was selected by the Montreal Expos in the second round. For the next three years he pitched for a number of minor league teams in the Expos' farm system. Late in the 1988 season, the Expos called Johnson up to the majors, where he did well for the remainder of the regular season, going 3-0 with an earned-run average (ERA) of 2.42. Despite his auspicious debut in major league ball, the next season was anything but promising for Johnson. After a dismal start to his 1989 season (an ERA of 6.67), Johnson was sent back to the minors by Montreal. Once again his problem was ball control. He walked twenty-six batters in twenty-nine innings. In late May 1989, the Expos traded Johnson to the Seattle Mariners. Johnson did better in Seattle but still posted a losing 7-9 record with an ERA of 4.40 for the remainder of the 1989 season.

Johnson showed improvement in 1990, going 14-11 with an ERA of 3.65. The highlight of his season was a 2-0 no-hitter he pitched against the Detroit Tigers. He also was tapped for his first All-Star Game, although he never got an opportunity to pitch. Although he turned in fairly creditable pitching records during the seasons of 1991 and 1992 with ERAs of 3.98 and 3.77, respectively, Johnson continued to be plagued by problems of ball control. Although he led the majors in strikeouts in 1992 with 241, he also led the majors in walks for the third consecutive season. Personal tragedy struck on Christmas Day 1992. As Johnson was flying home to spend the holidays with his parents, his father suffered a massive heart attack and died before Johnson could reach the hospital. In the wake of his father's death, he seriously considered leaving baseball. As he told an interviewer for Sport magazine, "Baseball meant so little. I enjoyed the thrill of telling my dad how good I was on a given night. When he passed away, I realized I had no one to call. Part of me had died too."

Johnson's mother convinced him not to leave baseball. To remind him of his father, he drew a cross and the word "Dad" on the palm of his glove. When troubled by feelings of weakness on the pitcher's mound, he would glance at these symbols. "My heart got bigger," Johnson told Sports Illustrated. "After my dad died, I was convinced I could get through anything. I don't use the word 'pressure' anymore. That's for what he [his father] went through. Life or death. I use the word 'challenge.' And I'll never again say, 'I can't handle it.' I just dig down deeper."

Johnson got help in overcoming his control problem from ace pitcher Nolan Ryan and Tom House, the pitching coach of the Texas Rangers. As a young pitcher, Ryan had experienced similar problems, and he saw a lot of himself in Johnson. The help from Ryan and House worked wonders, and in 1993 Johnson enjoyed his best season ever, going 19-8 with an ERA of 3.24. He tied an American record for left-handed pitchers when he struck out eighteen batters in a single game. The following year Johnson compiled an enviable 13-6 record with an ERA of 3.19 before a players' strike ended the season in August.

In the struggle to overcome his problems with ball control, Johnson got some valuable tips from world-famous pitching authority Tom House during the early 1990s. At the time House was pitching coach for the Texas Rangers. To show his gratitude for House's help, Johnson later wrote the foreword to House's Fit to Pitch, published by Human Kinetics in 1996.

House, who holds a Ph.D. in psychology, pitched professionally for the Atlanta Braves, Boston Red Sox, and Seattle Mariners between 1967 and 1979. He began his career as a pitching coach in 1980 and has worked in that capacity for the Houston Astros, San Diego Padres, Texas Rangers, and Japan's Chiba Lotte Marines. House is also the founder of Absolute Performance Group, which integrates sports science and sports technology with the health and fitness needs of the everyday individual. He travels extensively and serves as the information and instruction coordinator for twelve baseball academies across the United States and Canada.

In 1995 Johnson posted an 18-2 record with an ERA of 2.48, earning him his first Cy Young Award. Even more significantly, Johnson helped the Mariners make it to the playoffs where Seattle upset the New York Yankees in five games, largely on the strength of Johnson's brilliant relief performance in the fifth and deciding game. Sidelined by injury for most of 1996, Johnson bounced back in 1997 with a 20-4 record and an ERA of 2.28. After a mediocre start to his 1998 season with the Mariners, Johnson was traded by Seattle to the Houston Astros, where he posted an amazing record of 10-1 with an ERA of 1.28.

Despite Johnson's stunning success with the Astros, at season's end he became a free agent and signed to pitch for the Arizona Diamondbacks. It proved to be a marriage made in heaven. For the next four years, Johnson's incredible pitching earned him four consecutive Cy Young awards. His ERA for each of his first four years in Arizona never climbed higher than 2.64. In 2001 came what was for Johnson the brightest moment yet. Arizona made it into the playoffs, where Johnson compiled an astounding record of 5-1 with forty-seven strikeouts in forty-one innings. The Diamondbacks went on to win baseball's World Championship with a thrilling seventh-game victory over the New York Yankees in the World Series. Johnson and teammate Curt Schilling were named co-MVPs of the World Series.

When Johnson learned in early November 2002 that he'd earned his fourth consecutive Cy Young Award, he told the Associated Press: "I'm a very simple person. I work hard, and I push myself, and this is the reward…. If you remain consistent and have a good year, it's kind of a bonus. This has come from maintaining consistency, hard work, and dedication, and my teammates being very supportive offensively, defensively, and in the bullpen."