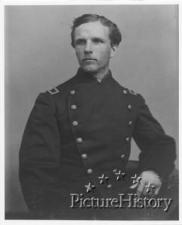 As an American educator, Samuel Chapman Armstrong (1839-1893) did much to advance the education of the African American. He was the founder of Hampton Institute in Virginia.

Samuel Chapman Armstrong was born on Jan. 30, 1839, on Maui in the Hawaiian Islands, the child of American missionaries. He spent his early years there, attending the Royal School at Punahou and, when that became Oahu College, continuing for 2 years. In 1860, carrying out the wishes of his father, who had recently died, he sailed for the United States and entered Williams College, in Massachusetts.

Although at first he was not particularly exercised over the issues of the Civil War, Armstrong found the excitement of his classmates infectious, and he volunteered for the Union Army in 1862. Given a captain's commission, he recruited a company near Troy, N.Y., which he led with distinction at the Battle of Gettysburg, earning a promotion to major. Shortly afterward, before his twenty-fifth birthday, he was appointed colonel of the 9th Regiment, United States Colored Troops. His experiences aroused his interest in the future of the emancipated African American. At the close of the war he received the brevet rank of brigadier general and was referred to as General Armstrong the rest of his life.

Armstrong joined the Freedmen's Bureau, the Federal agency dealing with the problems of former slaves, and in March 1866 took charge of a large camp of African Americans near Hampton, Va. He soon began to consider means of educating his charges and in 1867 interested the American Missionary Association in supporting a school at Hampton.

In setting up the Hampton Normal and Industrial Institution in 1868, Armstrong drew upon his Hawaiian experience. There he had seen the Hilo Manual Labor School, in which the students paid their expenses and tuition by gardening, housework, and carpentry. He was convinced that the best way to train African American youths to be leaders and teachers of their own people was in a school that combined manual with academic instruction. Teaching them to work with their hands as well as their heads would carry out the motto of his institution: "Education for Life." Discipline in the school was rigorous as Armstrong set out to eradicate habits learned in slavery and to equip his students to serve as examples in their personal lives.

Armstrong spent much time raising money from Northern philanthropists, and soon his school exerted a major influence on African American education. He also tried to extend the same principles to training Native Americans. Although his ideas were later criticized by young African Americans as underestimating the students' capacities, his school met an immediate need, flourished then, and still survives. He died at Hampton on May 11, 1893.

Edith Armstrong Talbot, Samuel Chapman Armstrong (1904), is an admiring biography by Armstrong's daughter; it contains extensive selections from his letters and speeches. Francis Greenwood Peabody, Education for Life (1913), is an account of the first 50 years of Hampton Institute. Frances B. Johnston, The Hampton Album (1966), contains 44 photographs, which, although not taken until 1899-1900, provide a vivid visual image of the school under Armstrong's direction. A favorable evaluation of Hampton, along with moving descriptions of what the school meant to its pupils, is contained in Booker T. Washington, Up from Slavery (1901; abr. ed. 1929). Criticisms of the Hampton approach may be found in W. E. B. DuBois, The Souls of Black Folks (1903). See Henry Allen Bullock, A History of Negro Education in the South (1967), for background.

Benjamin Lawson Hooks , Benjamin Lawson Hooks Attorney Benjamin Lawson Hooks (born 1925) was the executive director of the National Association for the Advancement of Colore… Martin Robinson Delany , African american nationalist Early Years. Born 6 May 1812 in Charles Town, Virginia, later the capital of West Virginia, Martin Robinson Delany was a… Horace R. Cayton , Cayton, Horace 1903–1970 Sociologist Horace Cayton spent his lifetime attempting to reconcile his two halves. Inheritor both of wealth and of the sla… Oliver Otis Howard , Oliver Otis Howard (1830-1909), a general on the Union side in the American Civil War, was commissioner of the Freedmen's Bureau and helped establish… May Edward Chinn , Chinn, May Edward 1896–1980 Physician May Edward Chinn led an unusual life for a woman of her time and race. She was a pioneer in many respects. Chin… Terry Mcmillan , McMillan, Terry Born: October 18, 1951 Port Huron, Michigan African American writer Terry McMillan, an African American novelist and short story writ…