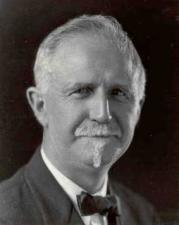 Roger Ward Babson, 1875–1967, American businessman and statistician, b. Gloucester, Mass. In 1904 he founded the Babson Statistical Organization, Inc., whose business and financial statistics, published in Babson's Washington Service, are widely sold in the United States, Great Britain, and Canada. In 1919 he established Babson Institute (now Babson College), in Massachusetts, and in 1927 he founded Webber College, in Florida. He was the Prohibition party's 1940 presidential candidate, polling 57,812 votes. He was the author of many books on finance and investment, among the best known of which are Business Barometers (1909, 10th ed. 1961), Investment Fundamentals (1930, 4th ed. 1948), and If Inflation Comes (1937).