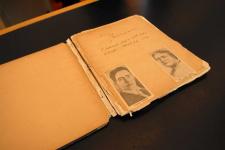 American agriculturist James Hamilton Couper (1794-1866), a leading Southern planter, was among the first to apply scientific research to agricultural operations.

James H. Couper was born on March 4, 1794, in Sunbury, Ga. His father had emigrated from Scotland in 1775. The family moved several times, settling on Georgia's Atlantic coast, where Couper's father bought land on St. Simon Island and formed a plantation partnership with a friend, James Hamilton. Their business was raising long-fibered sea island cotton. In 1804 Couper's father bought another tract of land on the Altamaha River near Brunswick, Ga. Couper grew up the heir of a wealthy and influential family.

Among Couper's advantages was a college education; he graduated from Yale College in 1814 at the age of 20. He traveled to Holland to study methods of water control for possible use on the Georgia plantations. After his return he became manager of the estate on the Altamaha River. The family fortunes suffered reversals in the 1820s, and Couper's father failed in business in 1826. Hamilton paid off his partner's obligations in exchange for a half interest in the river estate. The younger Couper acquired Hamilton's half interest the following year and remained as manager. When he inherited his father's acres on St. Simon Island, he emerged as a leading Southern planter, supervising some 1,500 slaves.

Couper soon began scientific research and experimentation, setting the pace for his contemporaries and successors in the South. His scientific diking and drainage system at the Altamaha plantation was soon copied by others. Beginning as a cotton planter, he later raised several other commercial crops, including rice and sugarcane. At Altamaha in 1829 he built the most complete, modern sugar mill in the South. He was also the first American to build and operate a cottonseed oil mill; he erected two mills. Although he failed in the cottonseed oil business, his successors in the South found the industry a most prosperous one.

Couper was one of the South's planter aristocrats; he had impeccable manners, a graceful way in conversation, an extensive library, and high social prestige. The Civil War freed his slaves, claimed two of his sons, and destroyed his life. Couper died in 1866; few had better symbolized the meaning of the old, antebellum slavocracy.

Couper's associate, Charles Spalding Wylly, wrote The Seed That Was Sown in the Colony of Georgia: The Harvest and the Aftermath, 1740-1870 (1910), a good source of information on Couper's life. Other helpful works include Frances Butler Leigh, Ten Years on a Georgian Plantation since the War (1883); Ralph Betts Flanders, Plantation Slavery in Georgia (1933); and Lewis Cecil Gray, History of Agriculture in the Southern United States to 1860 (2 vols., 1933-1941). □