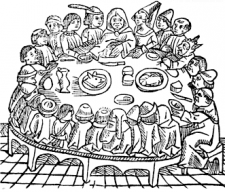 The Right Reverend and Right Honorable Arthur Michael Ramsey (1904-1988) was the 100th archbishop of Canterbury. He also served as archbishop of York and bishop of Durham and was a leading ecumenical churchman and a president of the World Council of Churches. Ramsey was Regius Professor of Divinity at Cambridge University and an influential Anglican theologian.

Arthur Michael Ramsey was born November 14, 1904, in Cambridge, England. His father was a nonconformist and a mathematics don (and later president) at Magdelene College. Michael spent his childhood in the late Victorian academic environment of Cambridge and attended the famous Choir School of King's College and then Sandroyd in Surrey. He won a scholarship to Repton, one of the most respected English public schools. The young headmaster was Geoffrey Fisher, later to be Ramsey's immediate predecessor as primate of all England.

On leaving Repton in 1922 Ramsey won a scholarship to Cambridge and the next autumn entered Magdelene College. He established himself as one of the most skilled speakers in the student union and served as president of the Cambridge Union in 1926. His reading of William Temple and the lectures of the New Testament scholar Edwyn Hoskyns especially impressed Ramsey. He received a second class in the classical tripos or examinations in 1925. By then he had decided to study for the Anglican priesthood. After a year of graduate study he received a first class in the theological tripos.

Ramsey entered Cuddesdon College near Oxford in July 1927 to commence his seminary training. That year his mother died in an automobile accident and shortly after that tragic event his brother Frank, a brilliant economist at Trinity College, also died suddenly. Ramsey underwent a period of acute depression and did not return to Cuddesdon for a term. In September 1928 he was ordained a deacon at the Church of Our Lady and St. Nicholas near the Liverpool docks, a parish he served for two years. This was a sharp break with his previous sheltered academic life. Ramsey was ordained a priest on September 22, 1929.

In 1930 he accepted the call to be sub-warden of Lincoln Theological College, an Anglican seminary in the cathedral town. It was at Lincoln that Ramsey published his first book, The Gospel and the Catholic Church, in 1936. The book was widely acclaimed and gave him a position of some prominence in the Church of England. In the fall of 1936 he moved to Boston Parish Church, England's largest parish church, to serve as lecturer—that is, preacher.

Two years later, in December 1938, he left Boston to become vicar of St. Benedict's Church, Cambridge, where he remained only one year before moving to Durham to be canon of Durham Cathedral and professor of divinity at Durham University. In April 1942 Ramsey married Joan Hamilton. His second book, The Resurrection of Christ, was published in 1944. It was during his ten years at Durham (1940-1950) that Ramsey's interest in the Eastern Orthodox Church became widely known, as did his support of Anglo-Catholicism in the English Church.

In 1950 Ramsey was appointed Regius Professor of Divinity at Cambridge and a Fellow of Magdelene College. Expecting to settle in the academic life in Cambridge for life, he was, nevertheless, soon asked by Prime Minister Winston Churchill to permit his name to be submitted to the queen for nomination as bishop of Durham. He was consecrated bishop in York Minster on September 29, 1952. A seat in the House of Lords came as a prerogative of the See of Durham. In 1954 Ramsey took an active, if critical, role in the deliberations of the World Council of Churches at its meetings in Evanston, Illinois.

On April 25, 1956, Ramsey was enthroned as primate of England and 92nd archbishop of York, the second highest position in the Church of England. His rapid rise was a remarkable accomplishment for a man just past 50. During his five years as archbishop he travelled extensively—to the Soviet Union, the United States, and Africa—on behalf of the church. He also had major responsibilities for the Anglican Lambeth Conference in 1958.

In 1960 his sixth book appeared, entitled From Gore to Temple. It is an interpretation of a half century of Anglican theology from the 1880s to World War II. The essay reveals Ramsey's own Catholic predilections and his disapproval of the Modernist theology which had gained a following in the English Church in the early years of the 20th century. Ramsey's cordiality toward Catholicism and his ecumenical concerns were further demonstrated in 1960 when he appeared on television with J. C. Heenan, the Roman Catholic archbishop of Liverpool, to discuss the recent meeting between the archbishop of Canterbury and Pope John XXIII in Rome. Later, at Lambeth, Ramsey was to meet with Augustin Cardinal Bea, who headed the Vatican Secretariat for Promoting Christian Unity, and with Patriarch Benedictos of Jerusalem.

Ramsey was enthroned as the 100th Archbishop of Canterbury on June 27, 1961, about three weeks after his formal election by the Greater Chapter (the canons) of Canterbury Cathedral. Like previous primates of all England, Ramsey and his wife took up residence at Lambeth Palace in London. A few months after his enthronement, Ramsey attended the third assembly of the World Council of Churches in New Delhi, India, where he again played an important role. He served as president of the World Council of Churches from 1961 to 1968.

Ramsey presented an especially imposing figure in his regalia as archbishop. A large, rugged, yet gentle and jovial man, he looked far older than his years. He was almost a caricature of a great ecclesiastical figure. A writer commented that in the presence of Ramsey "you feel that all the power and authority of Christendom is concentrated in his stooping presence. The wisdom of the ages seems entombed in his craggy head." The slow, sonorous cadences of his speech had a musical, even mystical effect, fitting High Church ritual and a man of his ecclesiastical position.

While stressing the Catholic tradition of the church, Ramsey was essentially a theological liberal, certainly no reactionary. He said he could only be happy in Anglicanism because "in Anglicanism there exists Catholic religion and intellectual liberty." His liberal theological views were reflected in his comments about the virgin birth and hell. On the virgin birth: "It is possible to believe that Jesus is divine without believing in the virgin birth, though if you do believe him divine then the virgin birth becomes congruous." On hell: "It is certainly not a physical place. It is a state of those who make hell for themselves by denying God a place in their lives." He thoroughly disliked and opposed evangelistic emotionalism and fundamentalism in the church.

Ramsey resigned as archbishop of Canterbury in 1974 at the age of 70. He retired to Durham. However, he remained active, a fact reflected in his writing of four books and numerous additional undertakings. Ramsey was a Life Peer and received innumerable honors. He was an honorary fellow of Magdelene College and Selwyn College, Cambridge, and of Merton College, Keble College, and St. Cross College, Oxford. He was honorary master of the bench, Inner Temple (1962); trustee of the British Museum (1963-1969); and honorary Fellow of the British Academy (1983). He held honorary degrees from Durham, Leeds, Edinburgh, Cambridge, Hull, Manchester, London, Oxford, Kent, and Keele and from a number of overseas universities.

In addition to Ramsey's works mentioned above, the following books will be of interest: The Glory of God and the Transfiguration of Christ (1949); F. D. Maurice and the Conflicts of Modern Theology (1951); Durham Essays and Addresses (1956); Canterbury Essays and Addresses (1964); Sacred and Secular (1965); God, Christ and the World (1969); with Cardinal Suenans, The Future of the Christian Church (1971); The Christian Priest Today (1972); Canterbury Pilgram; Holy Spirit (1977); Jesus and the Living Past (1980); and Be Still and Know (1982). No critical biography of Ramsey has been written to date. James B. Simpson's The Hundredth Archbishop of Canterbury (1962) deals with his life to 1962; it does not cover the period as archbishop of Canterbury, nor is it an adequate treatment of his theology. □

Orthodoxy , Orthodoxy African Orthodox Church, Inc Albanian Orthodox Diocese of America American Carpatho-Russian Orthodox Greek Catholic Church American Exarcha… High Church , High Church is a term applied to the party within the Anglican Communion in general, and the Church of England in particular, that has sought to mini… Episcopalianism , EPISCOPALIANISM. The Episcopal Church, U.S.A., is the representative of the Anglican Communion in the United States. Anglicanism first came to Americ… Catholic Apostolic Church , Originated when a group of Christians in England in the early 19th century concluded that the Second Coming of Jesus Christ (see parousia) would be p… Oxford Movement , An effort by Anglican clergymen of Oxford University between 1833 and 1845 to renew the Church of England by a revival of Catholic doctrine and pract… Ecclesiology , The branch of theology that studies the nature and mission of the Church. After considering the history of ecclesiology, this article will survey the…