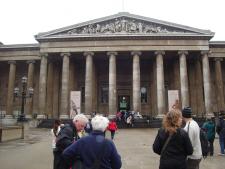 oxford
views updated
British Museum One of the world's greatest public collections of art, ethnography, and archaeology (established 1753). Its first displays came from a private collection purchased from the naturalist, Sir Hans Sloane. Later additions included the Rosetta Stone and the Elgin Marbles. The present building by Sir Robert Smirke was completed in 1847. The museum contains several separate departments, including the Museum of Mankind, and the Department of Prints and Drawings, which houses works by Rembrandt, Rubens, and Michelangelo, as well as many examples of Oriental art.

American Museum Of Natural History (new York New York) , AMERICAN MUSEUM OF NATURAL HISTORY in New York City is the largest natural history museum in the world. It displays more than 30 million specimens fr… Science Museums , SCIENCE MUSEUMS. The first public science museum was the Ashmolean Museum, founded at Oxford University in 1683 and created to educate and entertain… Victoria And Albert Museum , Victoria and Albert Museum Victoria and Albert Museum Victoria and Albert Museum, South Kensington, London, opened in 1852 as the Museum of Manufactu… British Library , British Library, national library of Great Britain, located in London; one of the world's great libraries. Long a part of the British Museum, the lib… Charles Willson Peale , Peale, Charles Willson PEALE, CHARLES WILLSON museum direction. Eldest of the five children of Charles Peale, sometime clerk in the General Post Offi… Smithsonian Institution , Established by an Act of Congress in 1846 with the bequest of English scientist James Smithson, the Smithsonian Institution is a research center that…