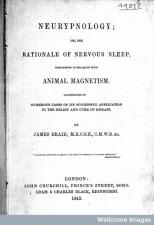 Scottish surgeon who originated the word "hypnosis" following his investigations into the phenomena of mesmerism. He was born at Rylaw House, in Fifeshire, Scotland, about 1795. He was educated at the University of Edinburgh, apprenticed to a doctor in Leith, then became member of the Royal College of Surgeons, Edinburgh (M.R.C.S.E.). He became surgeon to coal miners in Lanarkshire, then practiced with a doctor in Dumfries. Here Braid assisted a man injured in a stagecoach accident who persuaded him to move to Manchester, where Braid distinguished himself for his medical skill.

In 1841 he attended a lecture on animal magnetism given by Charles Lafontaine. Braid began his own experiments becuse he suspected that the subject was illusory or a matter of collusion between operator and subject. He soon believed in the reality of the mesmeric state but concluded that it did not arise from any "magnetic influence" passing from operator to subject. Braid found that an abnormal condition of sleep or suggestibility could be induced by the subject concentrating the gaze on an inanimate object. He designated this condition "neuro-hypnotism," a term later shortened to hypnotism. He delivered his paper, "A Practical Essay on the Curative Agency of Neuro-hypnotism," to the British Association at Manchester on July 29, 1842. He used hypnotism to produce anesthesia in some of his surgical patients.

Braid's findings and his writings were translated into French and German. Braid died March 25, 1860, in Manchester.

——. Observations on the Nature and Treatment of Certain Forms of Paralysis. London: T. Richards, 1855.

——. The Physiology of Fascination, and the Critics Criticised. Manchester, England: Grant and Co., 1855.

Sleep Disorders , Definition Sleep disorders are a group of syndromes characterized by disturbance in the individual's amount of sleep, quality or timing of sleep, or… James Douglas , Douglas, James Douglas, James medicine, natural history, letters. Douglas was the second son of William Douglas of Baads, near Edinburgh, and his wif… Polysomnography , Polysomnography Definition Polysomnography is a set of tests performed while a patient sleeps. It is done to diagnose and evaluate sleep disorders ,… Sleep , sleep is a complex behaviour that is an integral part of the body's strategic adaptation to daily changes in light and temperature. Because we lose c… Snoring , Snoring Definition Snoring is a sound generated during sleep by vibration of loose tissue in the upper airway. Description Snoring is one symptom of… William Scoresby , Scoresby, William (1789-1857) Scoresby, William (1789-1857) British Arctic explorer, whaler, physicist, author, and clergyman who was also a pioneer…