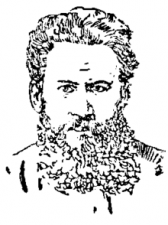 When Korolenko was arrested in 1879 for alleged populist activities and exiled to Siberia, he used the time to write many lyrical tales, exceptional for their descriptions of human sadness and desolate nature. His existential sufferings in Yakutsk, during which he often contemplated suicide, find expression in his writings.

One of Korolenko's famous short stories, "Makar's Dream" (1885), is also set in Siberia. In it, Makar, a poor little peasant who has become half-savage by his association with the Yakutsk people, dreams of a better future. Normally he has no time for dreaming; his days are consumed by hard physical labor—chopping, ploughing, sowing, and grinding. He only dreams when he is drunk. One Christmas Eve, Makar drifts off in a drunken sleep and dreams that the god of the woods, Tayon, has judged him harshly for his former deeds and has decided to transform him into a post-horse. Makar ends up convincing Tayon of his innate goodness.

In another famous story, "The Blind Musician"(1886), a blind youth overcomes his painful self-pity to become a sensitive violinist whose music takes on universal resonance. As his uncle watches the captivated audience, he thinks about his nephew. "He understands suffering. He has had his share, and that is why he can change it into music for this happy audience." Korolenko's talent thus lies in his expressions of the emotional and sentimental dimensions of life, his compassion for the downtrodden, as well as his masterful depictions of nature, which have much in common with Turgenev's.

Like many Russian writers, Korolenko felt that literature should play a leading role in advancing human progress; that a writer should not stand idly by in the face of injustice. He sought to create works that would unite realism and romanticism. In one historical story about the revolt of the Jews against the Romans ("A Tale about Florus, Agrippa, and Menachem, the Son of Jehudah"), Korolenko rebuts Tolstoy's doctrine of nonviolent resistance to evil. In works such as "The Day of Atonement" (first entitled "Iom-Kipur," 1890) and later in "House Number 13," Korolenko also took issue with anti-Semitism. Korolenko condemned the Bolshevik regime and the Red Terror he witnessed in indignant letters that he wrote to Anatoly Lunacharsky, the People's Commissar for Education.