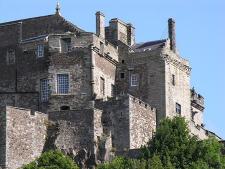 oxford
views updated
Alexander, Sir William, 1st earl of Stirling [S] (c.1576–1640). Alexander was born at Menstrie in Clackmannanshire. He established an early reputation as poet and dramatist, served at the court of Prince Henry, and was knighted. In 1614 James VI and I made him master of requests [S], a post he held until his death. He was given Nova Scotia to colonize in 1621, with baronetcies to provide support, but made little progress, and was eventually reduced to poverty. From 1626 until his death he served as secretary of state [S], was granted a viscountcy in 1630, and raised to the earldom of Stirling [S] in 1633. But his record was not distinguished. ‘Unactable plays and unreadable poems’ is a verdict on his literary output. His sojourn at Charles I's court at Westminster left him out of touch with Scottish opinion and he did little to arrest the drift towards collision in Scotland, which ultimately brought his master, Charles I, to trial and execution.