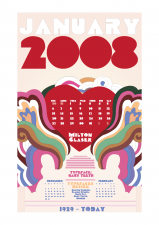 (Designer) Work, Life, Tools: The Things We Use to Do the Things We Do (based on an exhibition created by Milton Glaser and the Steelcase Design Partnership), Monacelli Press (New York, NY), 1997.

Some work appears under the name Max Catz. Creator of posters. Contributor to Our Times: The Illustrated History of the Twentieth Century. Editor, with Burton Wolf and James Beard, of "The Great Cook's Library" series, Random House (New York, NY), 1977-78.

Designer Milton Glaser is the creative mind behind two prominent American icons: a psychedelic poster of folk singer Bob Dylan, which was included free with Dylan's best-selling 1966 Greatest Hits album, and the "I [heart] NY" logo, originally used in a 1975 tourism campaign for New York and still common on T-shirts and other items over twenty-five years later. (Glaser also designed the updated version of the logo seen around New York in the wake of the September 11, 2001, terrorist attacks, which featured scorch marks on the heart and the words "more than ever" written in under the original logo.) During his career, Glaser has put his visual stamp on many other pieces of late-twentieth-century life, including buildings, consumer goods, advertising campaigns, and numerous publications. He has also illustrated several children's books, including two by his wife, Shirley Glaser.

Their 2003 collaboration, The Alphazeds, is a legend about the creation of words. Twenty-six characters, each a different letter of the alphabet written in a different type face, enter a room and interact with each other. Each letter has a personality that corresponds to its appearance and to a word that starts with that letter of the alphabet. For example, Angry A is covered in forbidding spikes and yells at the other letters; Elegant E, written in a fancy script font, makes proper, polite statements such as "I dare say, it's getting a bit crowded;" and Kicking K tries to boot everyone else. The dialogue is written in speech balloons, and by the time all twenty-six letters have arrived "a Babel of hand-printed chatter fills the sharp-cornered spread, which recalls a minimalist stage set," thought a Publishers Weekly contributor. Suddenly everything goes black, someone says, "Let there be light," and when the reader turns the page they see an amazing act of creation: four of the bickering letters have arranged themselves to spell "word." By cooperating, the letters create something that is much more than simply the sum of their parts. "As performed here, this literal, and visually striking, illustration of an abstract notion is quite moving," Paul O. Zelinsky wrote in the New York Times.

Glaser once commented: "There is a mystique about children's books as being a place for adventure and creativity, for taking risks, for extending the possibilities of defining what a children's book can be. But in fact the criteria are the usual: How similar is a new title to other successes, how significant is the author's name already, how closely does it cling to the established formulas.

"Statistically, there are never a great number of good people doing anything at one time. But in some ways, the level of achievement was once higher. A lot of the older books look better, and those of one hundred years ago look better than those of twenty-five years ago, even over and above the value they have accrued with nostalgia. The old techniques were more difficult to master and required a higher technical competence; they tended to weed out the mediocre and the dilettantes. Today's easy photomechanical processes provide less resistance."

Christian Science Monitor, November 30, 1995, Merle Rubin, review of Our Times: The Illustrated History of the Twentieth Century, p. B1.

Something About the Author

"Glaser, Milton 1929- (Max Catz) ." Something About the Author . . Retrieved February 16, 2020 from Encyclopedia.com: https://www.encyclopedia.com/children/scholarly-magazines/glaser-milton-1929-max-catz