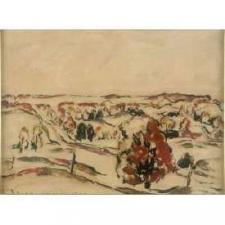 David Brown Milne (1882-1953), Canadian painter and etcher, was a pioneer of postimpressionism in Canadian art. He developed a personal style almost Oriental in its economy of means.

David Milne was born in January 1882 near Paisley, Ontario, and began his career as a country school-teacher. About 1904 he went to New York to study at the Art Students' League, but after 6 months he had to turn to commercial art for a living. In his spare time he painted the urban scene in the strong outlines and broad color areas of the Fauves. He exhibited five canvases in the famous Armory Show of 1913.

In 1915 Milne settled at Boston Corner in the Berkshire Hills. At the end of 1917 he joined the Canadian army as a private; a year later he was appointed as a war artist to record places where the Canadians saw action. From 1919 to 1928 he spent winters at Boston Corner and summers in the Adirondacks. In 1923 the National Gallery of Canada bought six of his watercolors. His paintings were included in the Canadian sections of the British Empire Exhibitions in England in 1924 and 1925.

From 1934, when Milne had his first one-man show in Toronto, he was encouraged by a small but discerning group of patrons, of whom the most constant over the years was Douglas Duncan, moving spirit of the Picture Loan Society. In spite of his life of seclusion, Milne contributed regularly to the exhibition of Canadian art societies, and he was one of the four artists representing Canada in its first showing at the Venice Biennale, in 1952.

Milne found his subject matter wherever he happened to be; the streets of New York, the Berkshire Hills and lakes in the Adirondacks, the sleepy villages of rural Ontario, the rocks of Georgian Bay, or perhaps a cupful of waterlilies with the weekend comics as a background. During the 1940s an element of whimsy appears in a series of watercolors such as Snow in Bethlehem, The Saint, and King, Queen and Jokers.

As Milne's personal style developed, his color became more limited and line increasingly important. Open space took on a more active role. This tendency also appeared in the color drypoint etchings he produced from 1922 on, and one may perhaps see in this fastidious medium the source of his sensitive painting style.

Background material on Milne is in Graham Mclnnes, Canadian Art (1950), and in Donald W. Buchanan, The Growth of Canadian Painting (1950). □

Archibald Lampman , Archibald Lampman The Canadian poet Archibald Lampman (1861-1899) was one of a loosely defined group of writers known as the "Confederation Poets" wh… Emily Carr , Emily Carr Emily Carr (1871-1945) was a Canadian painter and writer without equal as an interpreter of the native peoples and forests of British Colu… Canadian National Railway , Canadian National Railway Canadian National Railway, rail system in Canada and the United States, extending from coast to coast in Canada with many b… Mordecai Richler , One of Canada's most accomplished writers, Mordecai Richler (1931-2001) produced screenplays, novels, children's literature, and essays. At the time… Rudy Henry Wiebe , Wiebe, Rudy (Henry) 1934- WIEBE, Rudy (Henry) 1934- PERSONAL: Born October 4, 1934, in Fairholme, Saskatchewan, Canada; son of Abram J. (a farmer) an… Canada , Canada Culture Name Orientation Identification. The name Canada is derived from the Iroquoian word kanata, which means village. Location and Geograph…