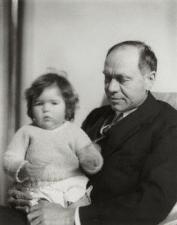 William Maxwell Aitken (Lord Beaverbrook; 1879-1964) was a Canadian businessman and politician who left an indelible mark on politics and journalism on both sides of the Atlantic. Aitken rose to prominence as a merger king in Canada before gravitating into British politics and mass-circulation journalism. In 1916 he was elevated to the peerage as Lord Beaverbrook.

William Maxwell Aitken was born in Maple, Ontario, on May 25, 1879, the fifth of ten children of Jane and William Aitken. His father's itinerant career as a minister of the Church of Scotland left a moral and geographic imprint on young Max, who grew up in New Brunswick on Canada's Atlantic coast. He imbibed Presbyterian values in a region that was seeing its once strong prowess in the wood, wind, and water industries eroded by technological and regional shifts in the Canadian economy. Max's early personality displayed a bumptious opportunism brought on by the limited scope for advancement in Atlantic Canada; Aitken's entire career may be seen as a steady gravitation from the margins of economic, social, and political power to its center—from the Atlantic provinces to Montreal and ultimately to London, the seat of imperial political and financial power. Other New Brunswick "boys" would follow similar patterns: Louis B. Mayer to Hollywood and Richard Bedford Bennett to the Canadian prime ministership.

An apt student with a penchant for math and reading, Max cut his entrepreneurial teeth selling magazines and insurance door-to-door. The study of law briefly beckoned but did not overcome his restlessness, and in 1898 Aitken headed for Canada's "last best west," where in Calgary he joined his boyhood friend R.B. "Dick" Bennett in operating a bowling alley. Sensing that finance capitalism was the lifeblood of Canada's booming economy, Aitken returned east to use his persuasive personality in the possibilities of company promotion. As secretary to Halifax promoter John F. Stairs, Aitken quickly acquired a reputation and growing wealth as the seller of bonds in Canadian industrial and utility ventures, some of which extended south to Cuba and the Caribbean. The limited capital pool of the maritime provinces prompted Aitken to shift his focus in 1906 to Montreal, Canada's financial hub. Aitken's arrival in the Canadian business establishment was reinforced by his marriage that same year to Gladys Drury, daughter of a well-placed Halifax family; three children followed: Janet (1908), Max (1910), and Peter (1912).

In Montreal Aitken capitalized on the opportunities for industrial consolidation in the hothouse of national industrial development. He assembled integrated companies out of hitherto fragmented industries, the creation of Canada Cement in 1909 and the Steel Company of Canada in 1910 being the best examples. These activities had a two-fold outcome. They made Aitken very wealthy; he was by 1910 a millionaire with a reputation as a bold "money spinner" capable of remaking the Canadian industrial landscape. They also drew him deeper into the transatlantic web of financial dependence that underlay the Canadian economy. At the same time, Aitken's business methods—alleged stock watering and questionable promotional tactics—affixed a lifelong stigma to his name.

From his arrival in England in 1910 to his death in 1964, Aitken was principally concerned with British politics and journalism. Few abiding principles pervaded his activities in these years; as in business, he was interested in power and the deal-making that underlay it. Aitken understood the power of modern mass democracy—so evident in the sway of his mass-circulation daily newspapers—and the necessary accommodations that turned broad public sentiment into policy. His ventures into amateur history bespoke this instinct: titles such as Politicians and the Press (1925) and Men and Power, 1917-1918 (1956) were best-sellers.

In 1910 Aitken won election as a Conservative member of Parliament for Ashton-under-Lyne; it would be his only elected office. While he excelled at the rhetoric of politics, he faded in the day-to-day practice of politics. Knighted in 1911, he drifted into back room political intrigue and began investing in the Daily Express, a profitable example of mass-circulation "new journalism." World War I gave scope to his charismatic qualities: he sensed the importance of "propaganda" on the home front. He extolled the exploits of Canadian troops in Flanders and later headed the Pictorial Propaganda Committee in England. He drew poets, writers (including Rudyard Kipling and Arnold Bennett) and filmmakers into the war effort. In 1918 he became Britain's minister of information. He played a role in the downfall of Prime Minister Asquith in 1916 and then served his successor, Lloyd George. In 1916 he received a peerage as Lord Beaverbrook, a move some alleged was designed by Lloyd George to forestall the bumptious Canadian from seeking his own job.

In the interwar years Beaverbrook continued to build his journalistic empire; he became a prototype of the modern "press lord." His control of the Daily Express was complemented by addition of the Sunday Express and the Evening Standard. The papers often reflected Beaverbrook's personal enthusiasms: empire free trade in the late 1920s and a fascination with Europe's totalitarian regimes. He visited both Stalin's Russia and Hitler's Germany. When war came again in 1939, Beaverbrook quickly abandoned his inclination to appeasement and rallied to the cause of war, serving his friend Churchill as minister of aircraft production in 1940-1941 and then as an adviser in various guises, including a continued championing of Russia as an ally. Despite his penchant for organization and quick results, the "Beaver" proved a mercurial colleague, prone to egotism and intrigue.

Peace saw Beaverbrook devote his energies to his newspaper empire and to his philanthropic nostalgia for his New Brunswick birthplace. He relished his social eminence in England, in Canada, and at his holiday homes in Jamaica and the south of France. Widowed in 1927, Beaverbrook maintained a wide circle of amorous relationships, including friendships with novelist Rebecca West and actress Tallulah Bankhead. In 1963 he married the widow of his childhood chum Sir James Dunn (1874-1956), a millionaire steel maker. Within a year Beaverbrook died of cancer, on June 9, 1964, and was buried in Newcastle, New Brunswick.

Beaverbrook was author of 11 books. As author, he was by turns amateur historian, political insider, and polemicist. His work is best sampled and not exhaustively read. Canadians in Flanders (1916), Success (1921), and Men and Power (1956) are most characteristic. Anne Chisholm and Michael Davie have written a definitive biography, Beaverbrook: A Life (1992), a book that overshadows A. J. P. Taylor's Beaverbrook (1972), a work clearly influenced by Taylor's own friendship with Beaverbrook. □

oxford
views updated
Beaverbrook, Lord (1879–1964). Newspaper proprietor. Born to a Scots-Canadian family in Ontario, William Aitken worked as a company negotiator, and used his business acumen to become a millionaire. In 1910 he journeyed to England, where his fellow Scots-Canadian, Andrew Bonar Law, found him a seat as a Conservative MP. Beaverbrook's penchant for making friends with men and women of influence served him well. He cultivated the acquaintance of Lloyd George, played a murky part in Lloyd George's overthrow of Asquith, and was rewarded with a peerage (1916) and membership of the Privy Council (1918).

Beaverbrook had, meanwhile, bought the Daily Express. He discovered he had a natural flair for journalism and this, combined with his business sense, helped boost the paper's popularity: by 1936 it had achieved a world-record circulation of 2.25 million copies per day. In 1923 he acquired control of the Evening Standard. Beaverbrook used his newspapers as vehicles for his own idiosyncratic views: empire free trade, support of Edward VIII during the abdication crisis, and for Neville Chamberlain over Munich. In 1940 Churchill made him minister of aircraft production. The choice was inspired. Beaverbrook's ruthless methods helped ensure the victory of the Royal Air Force in the Battle of Britain.