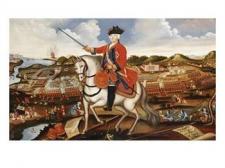 oxford
views updated
Cumberland, William Augustus, 1st duke of (1721–65). Cumberland was the second surviving son of the prince of Wales, later George II. Made duke of Cumberland in 1726, he was promoted lieutenant-general in 1744, after fighting at Dettingen. In 1745 he was proclaimed captain-general of the British army. Shortly afterwards, Marshal Saxe repulsed his attempt to relieve Tournay at Fontenoy. Recalled in October to deal with the Jacobite rebellion, he finally crushed it at Culloden in April 1746. His devastation of the central Highlands was ruthless, but provoked by a refusal to accept terms.

His Anglo-Dutch army back in Flanders was usually outnumbered by that of Saxe, and ill-provided. Mere competence could not bring victory. After the peace of 1748, his stress on disciplinary measures in the army made him unpopular. At the start of the Seven Years War, he virtually ran the British war effort but was destroyed by defeat against superior French armies in Hanover. The convention of Kloster-Zeven, which he signed with the French, was repudiated. He retired from the army, but remained a powerful political influence into the early years of George III. Obese and unmarried, he died unexpectedly of a clot on the brain.