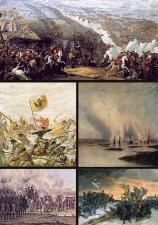 The Treaty of Nystadt was signed on August 30 (September 10, O.S.), 1721, in the Finnish town of Nystadt. It ended the twenty-one year Great Northern War between Russia and Sweden. The treaty was the result of several years of negotiations between the warring parties. The clauses were:

The treaty was published in Russian in large print runs of five thousand copies in 1721 and twenty thousand copies in 1723, following the authorization of the map showing the new borders. It sealed both Russia's rising status as a leading player in European politics and Sweden's decline as a major military power, marking its disappearance from the southern shores of the Baltic, to the advantage of Denmark, Prussia, and Russia. It also underlined Poland's status as a client state. At the official celebrations in St. Petersburg in October 1721, Peter accepted the titles Great, Emperor, and Father of the Fatherland from the Senate, further arousing the belief in some European countries that Russian influence was to be feared "more than the Turks." Except for the changes related to Finland, the treaty defined Russia's Baltic presence for the rest of the imperial era. The acquisition of ports brought Russia both economic and strategic advantages as well as an influx of highly educated Baltic German personnel to work in the imperial civil service.