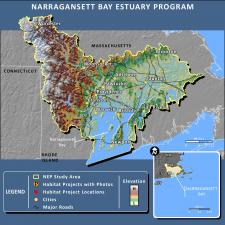 NARRAGANSETT BAY. An inlet of the Atlantic Ocean in southeastern Rhode Island, Narragansett Bay was so named by English explorers after the Indians who lived on its western shore.

The bay served as a primary artery of colonial maritime commerce. Trade and shipbuilding were the most prominent businesses. By the early 1700s, ships built in Newport and other bayside towns were available for sale to other colonies and Europe. During the American Revolution the Bay, integral to trade in restricted goods such as molasses, was the site of several key confrontations between the colonists and British officials. In 1772 HMS Gaspee, charged with pursuing colonial smugglers, was burned to the waterline.