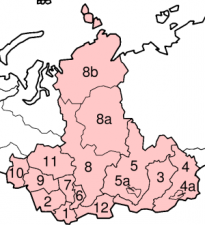 Altai Republic or Altay Republic (ăltī´, ăl´tī, ältī´), constituent republic (1990 est. pop. 190,000), 35,800 sq mi (92,722 sq km), SE Siberian Russia. Bordering on Mongolia in the south, it contains most of the Altai Mts. and is drained by the Biya, Katun, and Chuya rivers. The region is mountainous, and gold, manganese, and mercury are mined. Livestock raising and dairy farming are important, and grain is cultivated. The republic capital is Gorno-Altaisk (1989 pop. 46,000), a processing center for the agricultural products of the region. The majority of the population are Russians; the rest are Altaians (Oirots, Temuts, Shors, Tilengets, and Kumands). Altaians, numbering about 45,000, are Turkic-speaking peoples with Mongolian ancestry. Some are nomadic or seminomadic herders and hunters, but most are now settled on farms. A communal society existed in the area from the 3d millennium BC, and there is evidence of a Mongolian civilization in the 5th cent. BC The Turkish khanate ruled the region from the 6th to the 10th cent. AD, and the Altaians were under the control of the Mongolian khans from the beginning of the 13th to the 18th cent. In 1756 the Altaians came under Russian hegemony. From 1918 to 1922 there was civil war as the mountain groups fought the Bolshevik forces. Between 1922 and 1948 the republic was called the Oirat or Oirot Autonomous Region. It was renamed Gorno-Altai in 1948, a name it maintained until the mid-1990s. Gorno-Altai was given republic status in 1991 and was a signatory, under the name Republic of Gorniy-Altay, to the Mar. 31, 1992, treaty that created the Russian Federation (see Russia). The republic was formerly sometimes known as Mountain-Altai.