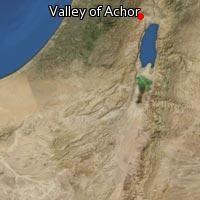 AIJALON (Ayyalon ) (Heb. אַיָּלוֹן; "place of deer"). (1) City situated in a broad valley (valley of Aijalon) which is one of the approaches to the Judean Hills. Volcanic activity occurring in the area in the latest geological period left some basalt traces and the hot springs found at *Emmaus in ancient times. Potsherds found on a large tell, about 3 mi. (5 km.) north of Babal-Wad, show continuous occupation from the Late Bronze Age onward. The village of Yalu is built on the tell.

The El-Amarna letters indicate that the region was included within the kingdom of Gezer in the 15th and 14th centuries, b.c.e. This kingdom was on hostile terms with Jerusalem, whose ruler Puti-Hepa complained that his caravans were being robbed in the valley of Aijalon ("Yaluna," ea, 287). In a letter to Amenhotep iv (ea, 273), the queen of the city of Zaphon (?) reports that the Habiru attacked the two sons of Milkilu, king of Gezer, in Ayaluna (Aijalon) and in Ṣarha (Zorah). Joshua referred to the valley of Aijalon in connection with his defeat of the Amorites. Joshua asked for a miracle to prevent the sun from setting so that the Israelites could avenge themselves on the Amorites. Joshua said: "Sun, stand thou still upon Gibeon; and thou, Moon, in the valley of Aijalon" (Josh. 10:12). The city is included in the tribal area of Dan (Josh. 19:42) and in the list of levitical cities (Josh. 21:24; i Chron. 6:54), but the Danites were unable to subject the Amorites, and later the region came under the influence of the "house of Joseph" (Ephraim; Judg. 1:34–35). The valley became a field of battle between the tribes of Dan, Ephraim, Judah, and Benjamin on the one side and the Amorites and Philistines on the other (i Chron. 7:21; 8:6). The region was finally conquered by the Israelites under David. Aijalon is included in Solomon's second administrative district under "the son of Deker" (i Kings 4:9). With the division of the kingdom, the valley remained within the kingdom of Judah, in the territory of Benjamin, and Rehoboam fortified it as part of his defense system of Jerusalem (ii Chron. 11:10). It is mentioned in the list of cities (no. 26) captured by Shishak, king of Egypt, in about 924 b.c.e. and the Philistines also captured it during the reign of Ahaz but held it only briefly (ii Chron. 28:18). There is no reference to Aijalon during the Second Temple period. The valley was located on the route taken by Cestius Gallus, the governor of Syria, in his campaign against Jerusalem in 66 c.e. (Jos., Wars, 2:513–6). In Byzantine times, Aijalon is mentioned as Ialo, a name which is preserved in the present-day Arab village of Yalu.

In 637 c.e., Aijalon was the headquarters of the Arab armies which suffered heavily at Emmaus. The region was badly damaged in an 11th-century earthquake. During the Crusades it was once again a battlefield and a fort was built there by the Crusaders (today *Latrun). It was also a scene of fighting during Allenby's campaign in 1917 and in the War of Independence (1948) a prolonged battle was fought in the region over the roads leading to Jerusalem. After the War of Independence, a few Israeli settlements were established in the region. These were considered border settlements, and during the 1950s they were under terrorist attack. In 1967 the whole area was occupied by the Israel Defense Forces, and the Arab inhabitants fled to Ramallah. In 1976 a large park was established on the deserted land of the Arab villages.

(2) Town in the territory of Zebulun where the judge, Elon, was buried (Judg. 12:12). Its location is unknown.