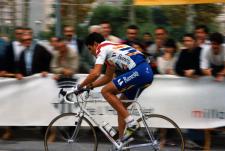 Perhaps one of the most physically grueling of all sports, cycling requires incredible physical endurance and the ability to withstand searing pain for hours on end. Miguel Indurain has the ability to endure this pain, and then some. In the world of cycling his name rests alongside those of Eddie Merckx, Jacques Anquetil and, in recent years, Lance Armstrong. Indurain's unmatched feat of five consecutive Tour de France victories in the 1990s made him a hero in his native country of Spain, and it has made him a legend in the world of cycling.

Miguel Indurain-Larraya was born July 16, 1964, in the small village of Villava, Navarre province, Spain. He grew up on a farm with a brother and three sisters, and were it not for his natural aptitude for the bicycle, he may well have been very happy as a farmer (he has since retired to a modest house and a quiet life in his home village). Though he would give cycling a try when he was eleven, he was not yet ready for the dedication the sport takes, and instead followed his interests in soccer and track. Less than five years later, however, he would get back on the bike.

Indurain won the Spanish Amateur Road Championship in 1983, and began his training program with Eusebio Unzue, who coached the local racing team. Indurain was nineteen at the time, and the next year he won 14 races, enough to convince him that it was time to turn professional. He joined a team in Pamplona headed by the former Spanish national team coach. The training rides were grueling, and Indurain, as he prepared for the many races he would participate in, logged tens of thousands of miles to increase his endurance.

Though he would not make it into his first Tour until 1985, Indurain had the ability to become a competitor in the Tour, and his coach and teammates knew it as well. It

would take time. The three weeks the Tour de France entails requires riders to sit on their bikes for five to seven hours a day nearly every day, often requiring years of cycling experience before a cyclist will even be able to complete his first race. Many riders drop out before the finish, and Miguel, in these early years, was no exception. In 1986 he pulled out of the race after the 12th stage.

A Matter of Time

But as the eighties progressed, so did Indurain's strength and endurance. As he moved into the 1990s, he was now a veteran in the world of cycling and had ridden in enough Tours to know how to compete. Indurain began his string of five consecutive Tour de France victories in the 1991 race, defeating defending champion Greg LeMond of America. He stood on the podium in Paris wearing the yellow jersey.

Indurain's tall and thin body was well suited for two parts of the three main aspects of the Tour, and he used them to full advantage. He was an excellent climber when the Tour reached the mountains, and he also had tremendous speed, which helped him take many of the individual and team-time trials in the Tour (the one aspect he did not excel at, the sprints, is not a necessary requirement for being able to finish and win the Tour). In 1992, coming off a victory in the Giro d'Italia and the Spanish National Championship, Indurain repeated his Tour victory, as he would for the next three Tours. Each year he dominated the field. His fellow cyclists (and teammates) often hurt themselves as they tried to keep up with him in the mountains.

End of an Era

Though Indurain is not the only cyclist to have won five Tour de Frances, he is the first person to win five consecutive Tour victories. He slipped back in the 1996 Tour and many of his fans waited for a comeback that never happened. His feat, however, is still considered by many to be one of the major performances in sporting history.

Some of his detractors claim that Indurain, unlike Eddie Merckx or Jacques Anquetil, trained solely for the Tour and avoided the many other races in which Merckx and Anquetil consistently competed even as they amassed their five Tour victories. One of France's top coaches, Cyril Guimard, was quoted in the Washington Post as saying that Indurain "never really accomplished any great individual physical exploits, other than a lot of winning races. For that reason, I don't think he deserves to be considered among the true greats of the sport." Indurain responded to this by saying, "I respect all opinions, but I cannot accept Guimard's. After all, what have the French racers managed to do in recent years?" Many believe his accomplishment speaks for itself.

Indurain chose to retire in 1997. Many fans were expecting the announcement, since two weeks prior the Spanish press had leaked the news. With the money he earned from cycling, Indurain still leads a relatively simple life, choosing to live with his wife Marisa and family in his homeland in the Spanish Basque region. Spain voted Miguel Indurain their Athlete of the Century in 2000.

Abt, Sam. Champion: Bicycle Racing in the Age of Indurain. Bicycle Books, Inc., 1993.