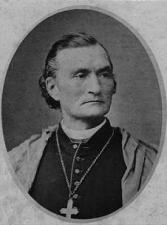 The French priest Jean Baptiste Lamy (1814-1888) was a pioneer Catholic prelate in the American Southwest. He established a flourishing diocese and became the first archbishop of the Santa Fe Province.

Born in Lempdes, France, on Oct. 11, 1814, Jean Baptiste Lamy was educated in his native country. The Catholic Church ordained him as a priest in 1838. The following year he volunteered for a mission to the American West and spent the next 11 years in Ohio and Kentucky. In 1849 the American Catholic Church's first plenary council asked Pope Pius IX to separate the newly acquired New Mexico Territory from the Mexican diocese of Durango. The Pope concurred, making Lamy his apostolic vicar for the region.

After an arduous journey, Lamy arrived in Santa Fe to a friendly greeting from the residents but a cold reception from the local clergy. Lacking notification of their area's new status, the priests, led by the Reverend John F. Ortiz, rejected Lamy's authority and asserted their allegiance to the bishop of Durango. There was little Lamy could do but set out on a long trek to Mexico, where the bishop, in the presence of Father Ortiz, gladly resigned his responsibilities to Lamy. Back in Santa Fe, Lamy initiated a number of reforms, such as holding Mass regularly and reducing the fees his priests charged for performing marriages, baptisms, and confirmations. In 1853 Rome elevated New Mexico to a diocese and made Lamy its first bishop.

For the next several years Lamy worked to strengthen the Church. The Vatican enlarged his jurisdiction to include what are now the states of Arizona and Colorado. On a mission to Rome, Lamy recruited priests to replace some of those who had opposed his authority. On his way back to Santa Fe through Kentucky, some Sisters of Loretto joined him; they founded some of the first English-speaking schools in the New Mexico Territory. Lamy also sponsored an orphanage and a hospital. He was assiduous in cultivating religion among the Indians, despite opposition from civilian officials.

In 1875 the Pope made Santa Fe a province and Lamy its first archbishop. The military authorities frustrated Lamy's attempts to obtain the same privileges for Catholic missionaries as the Protestants had; nevertheless, his services to the general community, Protestants and Jews as well as Catholics, were great. In 1885 he resigned as archbishop and retired to a nearby ranch. He died on Feb. 13, 1888.

There is no recent biography of Lamy. An old study is Louis Henry Warner, Archbishop Lamy (1936). One standard source is John Gilmary Shea, History of the Catholic Church (4 vols., 1886-1892). There are also brief accounts in James H. Defouri, Historical Sketch of the Catholic Church in New Mexico (1887), and Jean Baptiste Salpointe, Soldiers of the Cross (1898). The liveliest, although briefest, treatment is in Paul Horgan's delightful The Centuries of Santa Fe (1956). Willa Cather's novel Death Comes for the Archbishop (1927) is based on Lamy's life.

Presbyter , An official in the early Christian Church. This article treats of the use of this title, first as found in the Bible, then as employed in the early p… Vicar , vicar vicar •bicker, clicker, dicker, flicker, kicker, liquor, nicker, picker, pricker, shicker, slicker, snicker, sticker, ticker, tricker, vicar, w… Catholicism , The term Catholic, which etymologically means universal, is used within Christianity to differentiate it from other Christian communions such as the… Donatus , Donatus Donatus (died ca. 355) was the schismatic bishop of Carthage during the first decades of the Donatist movement. Little is known of Donatus be… Paul Iv , Pope of the Catholic Church from 1555 until 1559. A zealous reformer of the church, Paul took the Papacy in a direction away from what he saw as the… Patriarchate , PATRIARCHATE Part I: Historical Developments A patriarchate (Gr. πατριαρχεíα, Lat. Patriarchatus ) is a patriarch's office, see, reign, or, most ofte…