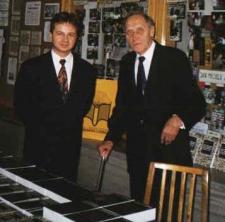 The philosopher Leszek Kolakowski (born 1927), beginning his work in Poland and continuing it in the United States and England, brought excitement into philosophy as a continuing ethical, metaphysical, and spiritual venture.

Leszek Kolakowski earned a double distinction in 20th-century philosophy: He was one of the few Eastern European philosophers to earn an international reputation. And, at a time when most professional philosophers narrowed their interests to technical problems and wrote for other philosophers, Kolakowski broke out of the academic mold, addressing a wide public audience on classical themes of ethics, metaphysics, and religion.

Born in Radom, Poland, on October 23, 1927, he lived in his native land until mid-career. World War II prevented his completion of high school, but he studied energetically to pass the entrance examinations for the University of Lodz. At the age of 18 he joined the Communist Party, attracted by the utopian idealism of Marxism and by the Communist opposition to Nazism. While at the university he married Tamara Dynenson. He went on to graduate studies in philosophy at the University of Warsaw, where he earned his doctorate in 1959, then joined the faculty.

Kolakowski soon won a reputation as a Marxist with a sense of irony and a sense of humor at a time (the era of Stalin) when East European Marxists were expected to be grim and single-minded. He soon showed himself to be a restive spirit within an authoritarian ideological context, and he defined himself as a "jester" amid the secular "priests" of authority. He also became known as a Marxist interested in conversation with people of other political and religious beliefs.

His independence of mind led him to a precarious position in Poland. As a young professor he became prominent in the "Polish October" of 1956, a movement that after the death of Stalin (1953) sought a more independent style of communism in Poland. Kolakowski wrote a short critique of Stalinism, "What Is Socialism?" Authorities forbade publication in Poland, but the paper circulated widely among students and an English translation appeared in America (The New Leader, February 18, 1959). His speech on the tenth anniversary of the Polish October (1966) led to his expulsion from the Communist Party. In 1968 he lost his professorship at Warsaw, "expelled by authorities for political reasons," as he explained it.

Kolakowski was quickly invited to a sequence of visiting professorships at McGill University, the University of California at Berkeley, and Yale University. In 1970 he became senior research fellow at All Soul's College in Oxford. After 1981 he divided his time between Oxford and the University of Chicago.

During his later years in Poland, Kolakowski sought to develop a "Marxist humanism," endorsing the Marxist dream of justice and combining it with the values of freedom and spirituality denied by most versions of Marxism. Gradually he became more critical of Marxism, especially of its determinism. He came to understand human history as "a process of accumulation of unexpected miracles." He turned his attention increasingly to questions of ethics, of human nature, and of the human spiritual quest.

With increasing fame came many honors both in Europe and in America. Among these were the Peace Prize of the German Book Publishers (1977); the McArthur Fellowship (1983), commonly known as the "genius award"; and the Jefferson Award of the National Endowment for the Humanities (1986), the highest honor the U.S. federal government confers for achievement in the humanities—and never before awarded to a noncitizen of the United States.

Kolakowski's thought may be described as an effort of criticism and redirection of the Enlightenment. He saw major movement in European thought as a necessary revolt against "petrified ways of thinking" and a valid skepticism of arbitrary political and intellectual authorities. But, following insights of Fyodor Dostoevsky and Friedrich Nietzsche, he said that it degenerated into enervating skepticism and moral relativism.

Kolakowski would like to see a renewed appreciation of religious mythology. He attacked the "idolatry" of both reason and politics and sought a recovery of the spiritual roots of culture. He was aware that the resurgence of traditional religions beginning in the 1970s was often barbarous, and he distrusted the blossoming of religious sects, "some ephemeral, others simply moronic." Yet he saw these as symptoms of a need. The basic belief in human rights, he argued, was not logically or empirically demonstrable; it can be rooted only in spiritual belief. In the heritage of the great 17th-century scientist Pascal, he advocated values, hopes, and ideas that could not be scientifically validated.

In the turmoil of Eastern Europe and the breakdown of communism, Kolakowski endorsed an "unconditional defense" of democratic civilization against totalitarianism. He advocated a combination, hard to achieve, of democratic freedom and the welfare state. But he was quite capable of criticizing some of the acts of "democratic" societies— including the requirement that he, when he applied annually for his visa to enter the United States, had to answer the questions whether he had ever been a Communist (which he readily acknowledged), a prostitute, or a drug smuggler.

Kolakowski was too independent a thinker to win many disciples. Professional philosophers enjoyed picking at flaws in the details of his reasoning. But he restored to philosophy an excitement that is rare in contemporary times, and he won immense attention and influence— symbolized by the article in a Solidarity newspaper proposing him for the presidency of Poland.

He wrote God Owes Us Nothing: A Brief Remark on Pascal's Religion and on the Spirit of Jansenism, which was published in 1995. An article in the National Catholic Reporter noted "Kolakowski waltzes into the public arena and reminds us, by virtue of forceful and precise arguments, why we need thinkers." (June 20, 1997, p. 17).

Kolakowski was the author of about 30 books, many of them only in Polish. His writings have been translated into some 14 languages. In addition to philosophy, he published three plays and three volumes of stories—or "tales," as he called them. His most massive book in English was the three-volume Main Currents in Marxism (1978), sometimes described as "a classic of post-Marxist thought." Shorter books in English included Conversations with the Devil, The Presence of Myth (1989), and Religion (1982). A revision of his Jefferson Lecture appeared in The New Republic (June 16, 1986) under the title "The Idolatry of Politics." His 1990 book Modernity on Endless Trial was a collection of 23 essays. See also National Review (December 25, 1995) and Commonweal (May 3, 1996) for reviews of his 1995 book God Owes Us Nothing: A Brief Remark on Pascal's Religion and on the Spirit of Jansenism. □