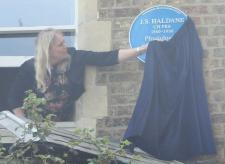 In respiratory physiology, John Scott Haldane was the prime mover of modern times. A member of the Cloan branch of the centuries-old Haldane family of Gleneagles, he was the younger brother of Richard Burdon, Viscount Haldane of Cloan, and father of J. B. S. Haldane, the geneticist and philosopher. His own father, Robert, was a lawyer and writer to the signet in Edinburgh; his mother was Mary Burdon-Sanderson, sister of John Burdon-Sanderson, first Waynflete professor of physiology at Oxford.

Haldane was educated at Edinburgh Academy and Edinburgh University, from which he was graduated in medicine in 1884. He also spent short periods of time at Jena and, later, at Berlin. His first research work, on the composition of air in dwellings and schools, was done at Dundee; an account was published in 1887. Soon afterward he joined his uncle at Oxford as demonstrator in physiology, and Oxford was his base for the rest of his life.

One of Haldane’s most impressive and constant characteristics, an impatience with artificial distinctions between theoretical and applied science, was soon manifest. Applying information gained from laboratory studies on the relation between carbon dioxide content of inspired air and respiratory volume, he began work on hazards to which coal miners were subjected. The result was a classic report on the causes of death in mine disasters which laid particular stress on the lethal effects of carbon monoxide. As a result of his inquiries in to coal mine disasters, Haldane’s curiosity took him back to the laboratory to establish the precise reasons for the toxicity of carbon monoxide. The result was a paper of enormous significance in which he showed that carbon monoxide binds hemoglobin, preventing it from serving as the body’s oxygen carrier, and that the effect can be vitiated by placing the experimental subject (mice) in a hyperbaric environment. The full clinical implications of the work were not appreciated for over half a century. Seeing the need for better analytic methods, he devised, in principle, the well-known Haldane gas analysis apparatus in 1898; and a few years later, with Joseph Barcroft, he developed a method for determining blood gas content from relatively small amounts of blood. Both are still in use, although the Scholander apparatus has largely replaced the Haldane-Barcroft device for determination of blood gases.

Haldane’s best-known paper, written with J. G. Priestley, set forth the view that pulmonary ventilation is controlled by the partial pressure of carbon dioxide in arterial blood reaching the respiratory center of the midbrain. It appeared in 1905 and, along with his analytic methods, immediately stopped up interest in respiratory physiology.

Haldane later modified and extended his concept of the chemical control of ventilation several times. Although now known to be much oversimplified, the work showed clearly that, except under extreme conditions, regulation of breathing depends far more on carbon dioxide content of inspired air than on oxygen content. It was probably Haldane’s most influential work, and it is astonishing to note that it, like his work on carbon monoxide poisoning, received very little clinical application until after World War II.

Still influenced by his interest in the intact, integrated human organism under stressful conditions (as in mines and during deep-sea diving), Haldane proceeded to unravel the basic enigmas of heatstroke and caisson disease (bends). He worked out the method for stage decompression which is still in use in deepsea diving operations and in underwater construction.

At the opposite extreme of the barometric pressure scale, Haldane and colleagues, including several American physiologists, undertook studies on the physiological effects of high altitude by making an expedition to the summit of Pikes Peak in 1911. The published work contains much of value but was marred by Haldane’s stubborn conviction that passage of oxygen across the lining of the tiniest air sacs (alveoli) in the lung could not be due solely to passive diffusion along a gradient of partial pressure. Haldane believed that it had to be due in part, and under certain circumstances, to active secretion by the cells lining the sacs. The oxygen-secretion theory, to which Haldane clung for the rest of his life, never received substantiation and has, for all practical purposes, long since been abandoned by respiratory physiologists.

Other work was more solid. Studies on hemoglobin dissociation showed very clearly the manner in which the degree of oxygenation of hemoglobin affects the uptake of carbon dioxide in the tissues and its release in the lung. Others dealt with the reaction of the kidney to water content in the blood and with the physiology of sweating. The practical world of engineering turned often to Haldane for counsel which he, among basic scientists, was uniquely able to give because of his sympathetic and informed interest in its problems. He was enormously influential in planning safety measures for tunnel construction and mining and diving operations, and in solving ventilation problems in buildings, ships, and submarines. In devising methods for ventilating naval vessels, he was following the eighteenth-century precedent set by one of Britain’s earliest and greatest physiologists, Stephen Hales.

Haldane summarized most of his work in the Silliman lectures at Yale (1916), which were published in book form in 1922. A new edition, prepared with Priestley in 1935, was for many years the standard textbook in respiratory physiology. Even a cursory look at the volume suffices to demonstrate the extent to which Haldane and his co-workers, especially Priestley and C. G. Douglas, laid the groundwork for respiratory physiology as it stands today. Two other books, dealing mainly with biophysical matters, took Haldane well out of his depth and received little acceptance. But nothing could diminish the importance to basic and applied scientists of the information contained in the Silliman lectures.

Like his brother, Viscount Haldane, J. S. Haldane had an abiding interest in philosophical topics and wrote extensively on the interface between science and philosophy. What he was grasping for is not easily understood, but a statement from the preface to the second edition of Respiration gives a few clues:

Haldane served on several royal commissions and was elected a fellow of the Royal Society in 1897. He was awarded the Royal Medal in 1916, received the Copley Medal in 1934, and was created Companion of Honour (for work in industrial hygiene) in 1928. He was a fellow of New College, Oxford, from 1901 to his death. He was also director of a research laboratory set up by the coal mining industry, first near Doncaster and later in Birmingham.

After 1921 Haldane spent a great deal of time at the Birmingham laboratory. But in the preceding twenty-five years he, probably more than anyone else, had brought the Oxford school of physiology into international prominence. He had looked searchingly at the process by which oxygen in the ambient air, in many different environments, enters the human body and arrives at the capillary. The reverse passage of carbon dioxide from capillary to exhaled air was of equal concern. But the mechanics of blood circulation seemed to interest him less than the total respiratory process, although he did devise a method for estimating cardiac output. Along the way he made many useful digressions and, by the ingenious application of many of his findings to industrial situations, he opened many doors and undoubtedly saved many lives.

An indefatigable worker and a thoroughly gifted scientist, Haldane showed by his example that the competent and committed scientific investigator must sometimes look beyond the laboratory and that the equilibrium between theoretical and applied science can be a very dynamic and constructive one.