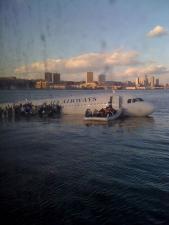 
Starting at Lake Tear of the Clouds, a two-acre (0.8-ha) pond in New York's Adirondack Mountains , the Hudson River runs 315 miles (507 km) to the Battery on Manhattan Island's southern tip, where it meets the Atlantic Ocean. Although polluted and extensively dammed for hydroelectric power, the river still contains a wealth of aquatic species , including massive sea sturgeon (Acipenser oxyrhynchus ) and short-nosed sturgeon (A. brevirostrum ). The upper Hudson is fast-flowing trout stream, but below the Adirondack Forest Preserve, pollution from municipal sources, paper companies, and industries degrades the water. Stretches of the upper Hudson contain so-called warm water fish, including northern pike (Esox lucius ), chain pickerel (E. niger ), smallmouth bass (Micropterus dolomieui ), and largemouth bass (M. salmoides ). These latter two fish swam into the Hudson through the Lake Erie and Lake Champlain canals, which were completed in the early nineteenth century.

The Catskill Mountains dominate the mid-Hudson region, which is rich in fish and wildlife , though dairy farming, a source of runoff pollution, is strong in the region. American shad (Alosa sapidissima ), historically the Hudson's most important commercial fish, spawn on the river flats between Kingston and Coxsackie. Marshes in this region support snapping turtles (Chelydra serpentina ) and, in the winter, muskrat (Ondatra zibethicus ) and mink (Mustela vison ). Water chestnuts (Trapa natans ) grow luxuriantly in this section of the river.

Deep and partly bordered by mountains, the lower Hudson resembles a fiord. The unusually deep lower river makes it suitable for navigation by ocean-going vessels for 150 miles (241 km) upriver to Albany. Because the river's surface elevation does not drop between Albany and Manhattan, the tidal effects of the ocean are felt all the way upriver to the Federal Lock and Dam above Albany. These powerful tides make long stretches of the lower Hudson saline or brackish , with saltwater penetrating as high as 60 miles (97 km) upstream from the Battery.

The Hudson River is comparatively short. More than 80 American rivers are longer than it, but it plays a major role in New York's economy and ecology . Pollution threats to the river have been caused by the discharge of industrial and municipal waste, as well as pesticides washed off the land by rain. From 1930 to 1975, one chemical company on the river manufactured approximately 1.4 billion pounds of polychlorinated biphenyls (PCBs), and an estimated 10 million pounds a year entered the environment . In all, a total of 1.3 million pounds of PCB contamination allegedly occurred during the years prior to the ban, with the pollution originating from plants at Ford Edward and Hudson Falls. A ban was put in place for a time prohibiting the possession, removal, and eating of fish from the waters of the upper Hudson River. A proposed cleanup was designated, to proceed by means of a 40-mile dredging and sifting of 2.65 million cubic yards of sediment north of Albany, with an anticipated yield of 75 tons of PCBs.

In February of 2001 the U.S. Environmental Protection Agency (EPA), having invoked the Superfund law, required the chemical company to begin planning the cleanup. The company was given several weeks to present a viable plan of attack, or else face a potential $1.5 billion fine for ignoring the directive in lieu of the cost of cleanup. The cleanup cost, estimated at $500 million was presented as the preferred alternative. The engineering phase of the cleanup project was expected to take three years of planning and was to be scheduled after the offending company filed a response to the EPA. The company responded within the allotted time frame in order to placate the EPA, although the specifics of a drafted work plan remained undetermined, and the company refused to withdraw a lawsuit filed in November of 2000, which challenged the constitutionality of the so-called Superfund law that authorized the EPA to take action. The river meanwhile was ranked by one environmental watchdog group as the fourth most endangered in the United States, specifically because of the PCB contamination. Environmental groups demanded also that attention be paid to the issues of urban sprawl , noise, and other pollution, while proposals for potentially polluting projects were endorsed by industrialists as a means of spurring the area's economy. Among these industrial projects, the construction of a cement plant in Catskill where there is easy access to a limestone quarry, and the development of a power plant along the river in Athens generated controversy, stemming from the industrial asset afforded by development along the river versus the advantages of a less fouled environment. Additionally, the power plant, which threatened to add four new smokestacks to the skyline and to aggravate pollution, was seen as potentially detrimental to tourism in that area. Also in recent decades, chlorinated hydrocarbons , dieldrin, endrin, DDT, and other pollutants have been linked to the decline in populations of the once common Jefferson salamander (Ambystoma jeffersonianum ), fish hawk (Pandion haliaetus ), and bald eagle (Haliaeetus leucocephalus ).

Concerns over the condition of the lower river spread anew following a severe September 11 terrorist attack on New York City in 2001. In this coastal tri-state urban area where anti-dumping laws were put in place in the mid twentieth century to protect the river from deterioration due to pollution, new threats of pollution surfaced regarding the potential for assorted types of leakage into the river caused when the integrity of some land-based structures including seawalls and underwater tunnels was compromised by the impact of exploding commercial jetliners involved in the attack.

HUDSON RIVER. From its Adirondack origin in Lake Tear of the Clouds to its southern terminus in upper New York Bay, the Hudson River, 306 miles in length, drains an area of about 13,370 square miles. While its waters were long traveled and fished by Indians, the first European to see the Hudson was probably Giovanni da Verrazano, an Italian sailing for the French, who explored the area in 1524. Although other Europeans reached the Hudson during the sixteenth century, settlement occurred only after Henry Hudson's September 1609 voyage of exploration. Hudson, an Englishman in the employ of the Dutch East India Company, was seeking a northwest passage to the Far East. On his ship, the Half Moon, he sailed about 150 miles up the river that now bears his name.

After Hudson reported on the availability of furs along the river, Amsterdam fur traders established a Dutch trading post at Fort Nassau (near present-day Albany) in 1613. In 1623, the newly created West India Company took over the fort, renaming it Fort Orange, while the vast territory claimed by the Dutch was called New Netherland, with its principal settlement, New Amsterdam, at the southern tip of Manhattan Island. Much of the settlement of New Netherland was concentrated on the Hudson River, with a few large patroonships established along its banks. The river and the territory remained in Dutch hands until 1664, when Sir Richard

Nicolls led a force of Englishmen who seized the territory and renamed it New York.

The Hudson played a significant role during the American Revolution, with both the British and the Americans seeking to maintain control of the waterway. On 12 July 1776, Admiral Lord Richard Howe sent two British warships, the Phoenix and the Rose, thirty miles up the Hudson to Tarrytown. To prevent the British from moving further north, logs were used to float an iron chain across the river from the fort at West Point to Constitution Island.

New York's most dramatic growth followed the end of the Revolution, when the Six Nations of the Iroquois ceded most of their territory to the state, permitting settlers to move up the Hudson and then west. Growth was further accelerated with the 1807 invention of the steamboat. Steamboats sparked the state's economic development and eventually fostered a tourist industry by attracting wealthy city residents north to the Catskills and Adirondacks. Even more rapid economic growth followed the opening of the Erie Canal in 1825, as goods from Lake Erie ports were moved through New York State and then down the Hudson to shipping facilities in New York City. The completion of the Hudson River Railroad in 1851 further spurred trade and encouraged wealthy New Yorkers to build homes along the Hudson.

The beauty of the Hudson River valley sparked a revolution in American art with the development of the Hudson River school of painters. By the early nineteenth century, artists such as Thomas Cole, Asher Durand, John Kensett, Thomas Doughty, Jasper Cropsey, George Inness, and John Casilear created American landscapes that celebrated the natural beauty of the area. The river and its mountains also served as a favored locale in the literary works of such American writers as Washington Irving and James Fenimore Cooper.

The river has paid a price for progress and development. By the twentieth century, the Hudson had become a polluted waterway. The river was the focal point for conservationists when, in 1962, Con Edison made a proposal to build a hydroelectric plant on the river at Storm King Mountain. Opposition to the plant prompted the U.S. Court of Appeals to insist that the planners consider the effects of the plant on the environment. In the ensuing battle, the pressure brought by environmental groups led Con Edison to drop the Storm King project in 1980. A later environmental battle concerned the dumping of over one million pounds of the carcinogenic substance polychlorinated biphenyl (PCB) in the Hudson by major corporations situated on its banks. In 2001, the Environ-mental Protection Agency ordered General Electric to begin a $500 million dredging operation of the Hudson River to remove the PCBs.