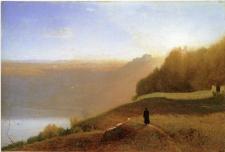 The American artist George Inness (1825-1894) was primarily a landscape painter, who developed a personal, subjective form of impressionism.

George Inness was born May 1, 1825, near Newburg, N.Y. His family moved in 1829 to Newark, N.J., where Inness was educated and took painting and drawing lessons. In 1841 he worked as a map engraver for a New York firm. He soon gave this up to sketch direct from nature. At the age of 18 he married Delia Miller, who died a few months later. In 1844 he exhibited at the National Academy of Design, and the next year he studied briefly with Régis Gignoux. Inness's earliest pictures show the influence of 17th-century masters such as Claude Lorrain, Gaspard Dughet, and Meindert Hobemma.

In 1847 Inness spent a short time in England and Italy. Three years later he married Elizabeth Hart and spent another 2 years studying and painting in Florence. On returning to New York, he was elected an associate member of the National Academy. Again he returned to Europe, this time to France. Exposure to Camille Corot and the painters of the Barbizon school had a profound effect on Inness's work after 1855. One of his best pictures from this period is the Lackawanna Valley (1855), which shows his new breadth of light and atmosphere as well as an openness of composition and a freshness in the handling of paint.

On his return from France, Inness settled in Medfield, Mass., which became the setting for a number of oils painted during the next 5 years. In the early 1860s he painted in the Adirondacks, Catskills, and Berkshires and also in New Hampshire. He was now in control of his new style, one that allowed him to convey "that subjective mystery of nature with which wherever I went I was filled." Especially appealing were the contrasting moods of nature—sunrise and sunset, calm and storm.

About 1865 Inness met the painter William Page, who introduced him to the teachings of Emanuel Swedenborg. A combination of science and religious mysticism, Swedenborgianism provided Inness with a philosophical basis for his art. Inness was in Rome from 1870 to 1872 and in France for the next 2 years. During this period of travel he systematically refined his manner of composing, use of color, and handling of brushwork, making each as effectively expressive as possible. Many of his Italian paintings have a distinctive decorative flatness and elegant juxtaposition of silhouettes, notably The Monk (1873).

In 1875 Inness returned to New York and 3 years later moved to Montclair, N.J., where he painted for most of the rest of his life. His later paintings reveal an increasingly careful sense of design: he mostly relied on dividing his landscapes into foreground and background, with the former subdivided diagonally into approximate halves. Generally, figures and trees are clearly situated within one plane, so that no details are distracting and all design components are harmoniously unified. A typical example is the Coming Storm (1878).

Inness spent the summers of the 1880s variously in Connecticut, Nantucket, Mass., and upstate New York. At the end of the decade he traveled to the western and southern United States, Mexico, and Cuba and in the early 1890s to Florida, California, and Canada. His late work is much more subjective and impressionistic, the landscapes appearing less as specific places and more as hazy memory images. In 1894 he visited Paris, Baden, and Munich. He then went to Scotland, where he died suddenly at the little town of Bridge-of-Allan on August 3.

Frank Kupka , Frantisek Kupka (1871-1957) was a Czech painter and illustrator who lived most of his life in Paris. He was one of the first artists to paint abstrac… Asher Brown Durand , The American painter and engraver Asher Brown Durand (1796-1886) was a prominent figure in the first generation of the Hudson River school of painter… Alfred Sisley , Sisley, Alfred Alfred Sisley (1839–1899) was a key painter of the early Impressionist period, a friend and associate of Claude Monet and Pierre Renoi… Francis Bacon (painter) , The English artist Francis Bacon (1909-1992) was one of the most powerful and original figure painters in contemporary art, particularly noted for th… George Wesley Bellows , George Wesley Bellows George Wesley Bellows (1882-1925) was a prolific and accomplished leader among American painters who approached representation… Balthus , Balthus Balthus (born 1908) was a European painter and stage designer who worked within the Western tradition of figure painting. He is best known fo…